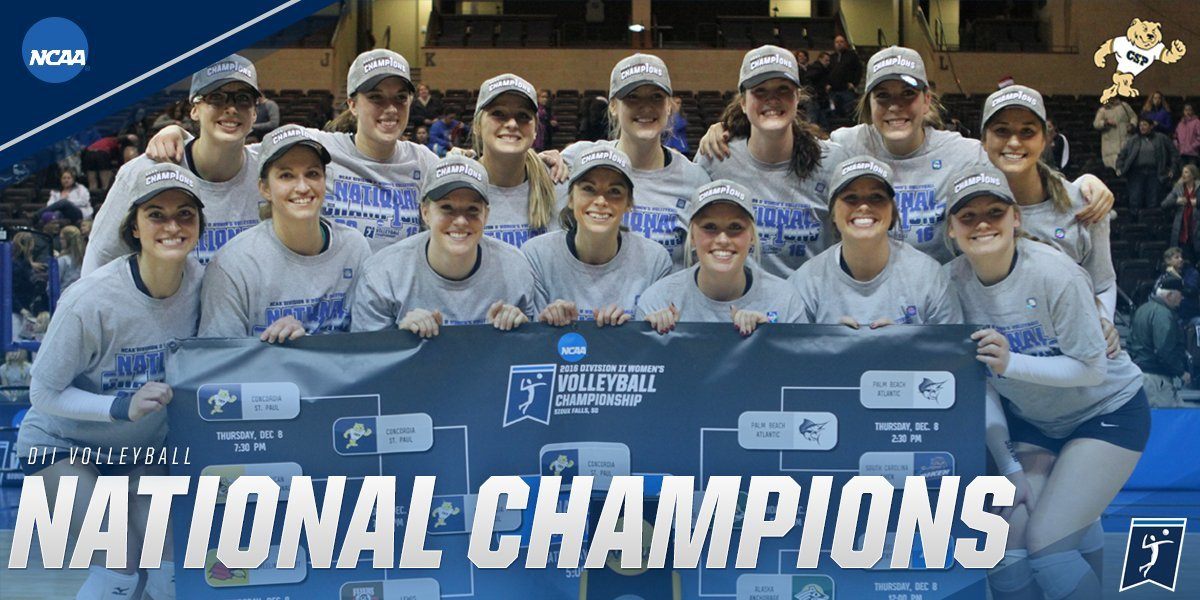 They were the #1-ranked team in the country in 9 o f the 13 AVCA Polls this season. They were champions of the NSIC and the NCAA Central Region Tournament. And on Saturday, the Golden Bears from Concordia-St. Paul University were crowned NCAA Division II National Champions with a 3-0 hammering of Alaska-Anchorage in the final.

The win was the 8th title in Concordia program history which moves them into sole possession of second-place all-time in NCAA National Championships at any level – Penn State and UC San Diego each have 7, while Division III Washington University – St. Louis won their 10th earlier this year.

The matchup was a showdown between two cold weather teams playing in a cold weather venue – where Thursday’s high was 17 degrees Fahrenheit. Unperturbed by the chill, The Golden Bears started off hot with a .429 hitting percentage in the first set. They would go on to hit better than .400 in all three sets, including a .458 average in the final clinching frame to win the title.

The offensive output was not a big surprise – the Golden Bears led the country in hitting percentage all season long, and it wasn’t that close. Only Southwest Minnesota State (.312) and Wheeling Jesuit (.307) even hit above .300 in Division II this year.

They were, however, playing an Alaska-Anchorage team that ranked 12th nationally by allowing opponents to hit just .127 against them. Before allowing Concordia to hit .433 on Saturday, the Seawolves didn’t give up better than a .199 hitting percentage to any opponent all season – including in the 3 games they lost.

That shows just how dominant the Concordia offense was this season. In their final two 4 games, against theoretically the98 best Division II competition in the country, the team hit .417.

Hope Schiller contributed 5 service aces for the Golden Bears – who dominated in every statistical category, including an 8-2 edge in aces.

For Anchorage, Leah Swiss led the team with 8 killls on 25 swings for a .280 percentage.