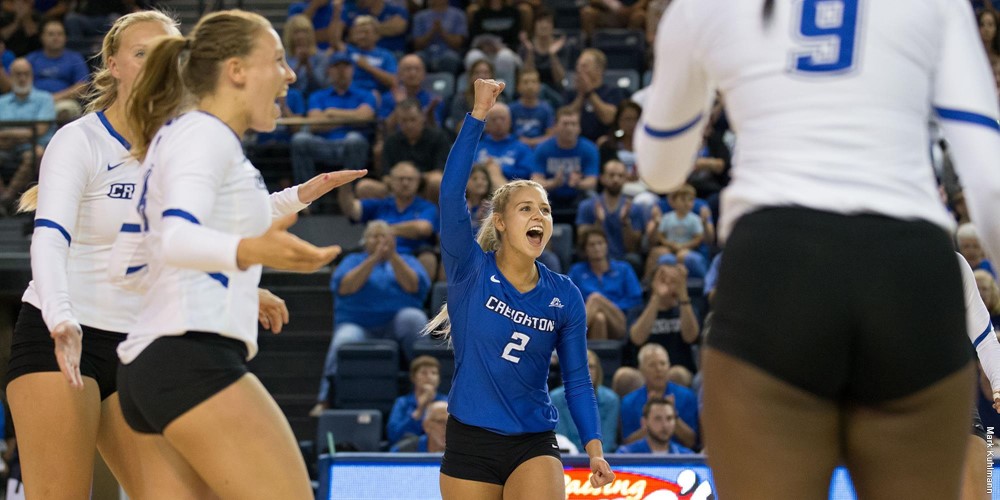 Creighton took down St. John's at home in a four-set feat to improve to 8-1 in Big East play. Current Photo via Creighton Athletics

Creighton took down St. John’s at home in a four-set feat to improve to 8-1 in Big East play.

The first set started off slow for the Bluejays as St. John’s took a 3-0 start off three straight Creighton hitting errors. The Bluejays fought back to tie things up at 5-5 before taking the lead in the match on a number of St. John’s hitting errors. The score got tied back up at 14-14 mid-set before a Megan Ballenger kill and Naomi Hickman/Marysa Wilkinson block brought the Bluejays to a 16-14 lead. Up until 22-22, Creighton held a small lead over St. John’s but finished the set on a Jaali Winters kill at 25-23.

St. John’s was once again led the Bluejays in the second set, taking a 15-10 lead in the middle of the set. They kept this lead throughout the remainder of the set before a Danisha Moss/Kayley Wood block tied things up at 1-1 with a 25-20 second set score.

The final set started off tight for both team with the score tied at 6-6. Creighton went on a 3-0 run to go ahead 9-6 off a kill from Winters, a St. John’s hitting error and Hickman kill. Small runs from the Bluejays kept them ahead by a significant amount throughout the set, before finishing off the match on a four-point run ending with a Samantha Bohnet ace.

Creighton is now 15-5 on the fall and tied with Marquette in the BIG EAST standings with an 8-1 league mark midway through conference play. The Golden Eagles host Xavier tonight at 7 p.m. Central.

St. John’s was paced by eight kills each from Jordan McCalla and Julia Cast, and setter Erica DiMaulo had a double-double with 27 assists and 13 digs.

Creighton won a tense opening set, 25-23, as both teams struggled out of the gates after the rare mid-afternoon weekday start. Creighton appeared in control with a 19-15 lead before the Red Storm fought back to tie the score at 21-21.  Winters put down kills on CU’s final two points of the frame.

St. John’s (11-14, 3-7 BIG EAST) evened the match with a 25-20 triumph in the second set, its first set victory in Omaha since 2013. The Red Storm used a 4-0 run on Kayley Wood’s serve to move ahead 7-4 and did not surrender the lead from there. CU got within two at 22-20, but a kill from Wood and consecutive Bluejay attack errors closed out the set. Cast and McCalla each had four kills in the second set, as SJU hit .171 as a team in the win.

Creighton would control the final two sets. Six different Bluejays put down a kill and three women had an ace in CU’s 25-13 third set victory. Witt authored a pair of serving runs in the third set. Ballenger and Lydia Dimke had consecutive blocks to put CU up 5-3 and the hosts maintained the lead for good.

Ballenger and Naomi Hickman combined for three blocks in a four-point stretch as Creighton clinched the match with a 25-16 victory. Creighton out-blocked the Red Storm 5-1 in the final set to even the blocking category at 12 each for the afternoon.  CU had four different 3-0 runs in the fourth set of the victory, which was capped by Samantha Bohnet‘s third ace of the afternoon.

Creighton will host Seton Hall on Sunday at 1 p.m. in the program’s annual Pink Out.

Facing a strong offensive team in the three-time defending BIG EAST Tournament and regular season champions on the road, the Red Storm had four different players register 10 or more digs and held the Bluejays’ attack to a .191 attacking percentage. Each program recorded 12 blocks, but Creighton held the Red Storm to a .042 clip and tallied 54 kills compared to 34 for St. John’s. As a team, the Red Storm collected three service aces to just two errors from the service line.

Hanna Wagner represented the most efficient Johnny for the match with six kills on a .235 hitting percentage, while also leading all players with seven blocks. Amanda Sanabia continued her strong play as of late with 19 digs in the back row to top the squad.

A 2017 Preseason All-BIG EAST selection, Erica Di Maulo collected her 11th double-double of the season with 27 assists and 13 digs. The sophomore setter now has 2,067 assists in her career, which moves the Milan, Italy, native up to sixth all-time in Red Storm history. Kayley Wood helped the Red Storm defense with a career-high 13 digs and classmate Jordan McCalla reached the double-digit dig mark with 10 and tacked on eight kills. Julia Cast tied McCalla with a team-best eight kills and Danisha Moss tallied five blocks for the afternoon.

The Bluejays, who moved to 8-1 in conference play, had four players with 10 or more kills and Brittany Witt recorded a match-high 20 digs.

The Red Storm got off to a quick start on the afternoon with a 5-2 advantage on three attack errors by the Bluejays. Creighton then went on an 8-1 run to take a 10-6 lead, but to continue the set of runs, the Johnnies erupted for an 8-4 run of their own to even the frame at 14. The Bluejays regained the lead, 21-19, before the Red Storm tied the stanza at 21 and then again at 22 as the Johnnies showed resistance all throughout the set. Creighton won three of the final four points of the closely contested opening stanza with a kill by Jaalil Winters to give the Bluejays a 25-23 set win. The Red Storm registered five blocks in the first frame, including four by Wagner.

For the second-straight set, St. John’s jumped out in front with a 7-4 advantage with four consecutive points after the frame was tied at three. The Red Storm kept it rolling to stretch its lead to 14-8 against the No.16 team in the country to force Creighton to issue its final timeout of the frame. After the Bluejays cut the lead to 22-20, the Johnnies scored three-straight points after a block by Moss and Wood ended the frame on a 25-20 triumph to give the Red Storm its first set victory over No.16 Creighton since 2015.

After the Bluejays led early in the stanza, 4-3, St. John’s took control the rest of the set with four blocks as a team and four kills by McCalla. The first two frames saw the Red Storm get off to quick starts, but Creighton took advantage early with a 7-4 lead to open up the third. From there, the Bluejays cruised the rest of the frame to a 25-13 triumph to take a 2-1 lead in the match.

In the final set of the Friday afternoon showdown, the score began even at six, followed by an 8-3 run for the Bluejays to take a 14-9 lead. The Johnnies looked to come back in the fourth frame, but the Bluejays held off the Red Storm with a 25-16 set win to take the match in four sets.

St. John’s will close out their three-game road trip on Sunday, Oct. 22 when the Red Storm travels to take on the Providence Friars with first serve slated for 1 p.m.