Creighton Serves Their Way To Victory Over DePaul 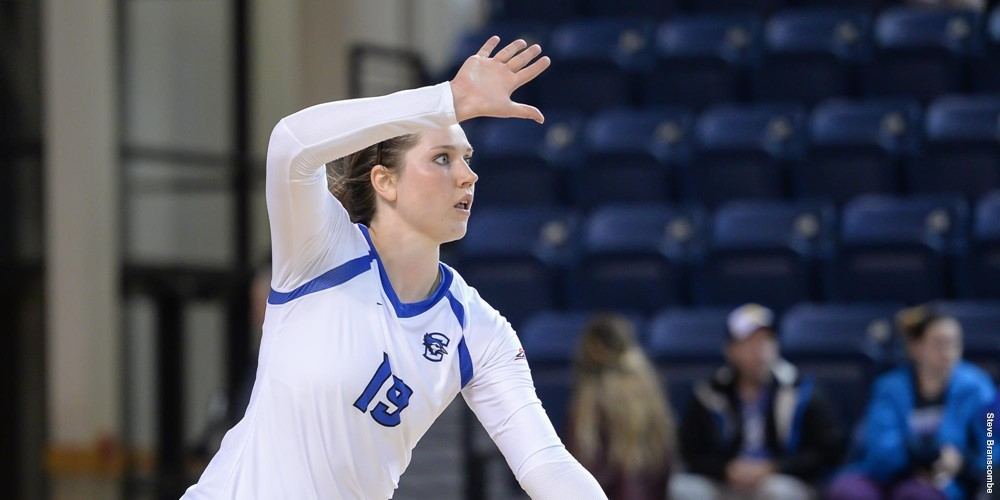 The Bluejays moved to the sole leader of the Big East with the four set win over DePaul.

Megan Ballenger served big, posting six of the 12 Creighton aces. Three of her aces came in the fourth set, when she went on a 13-0 serving run giving the Bluejays the lead they needed to win the set and match. The middle hitters put up big numbers with Marysa Wilkinson putting down 14 kills, six blocks on a .545 hitting percentage and Lauren Smith added 13 kills, four blocks and hitting for .524.

DePaul setter Colleen Smith picked up her third-straight double-double with 37 assists and 11 digs. From the back row, Haley Bueser recorded a team-high 12 digs. Myah Reed posted 14 kills, followed by Brittany Maxwell with 12 kills and five blocks.

OMAHA, Neb. — Megan Ballenger served up six of Creighton’s season-high 12 aces in a 3-1 win over DePaul that moved the Blueays into sole possession of first place in the BIG EAST Conference.

Creighton (8-6, 2-0 BIG EAST) and DePaul (7-7, 1-1 BIG EAST) entered the day as the lone unbeaten teams in BIG EAST play after a wild opening weekend featuring several upsets. The Bluejays, riding the momentum of a 3-0 sweep over Marquette on Friday, did enough to win their seventh straight meeting over DePaul.

DePaul was led by 14 kills from Myah Reed, while Brittany Maxwell added 12 kills and five blocks. The Blue Demons  finished with 47 kills, 10 aces, 41 digs and seven blocks on .191 hitting.

Creighton hit .417 in the first set to cruise to a 25-15 win. Amanda Foje served up an early 7-0 run to help CU take an 8-2 lead, including the first Bluejay ace of the afternoon. Ballenger later served up her first two aces during a 4-0 spurt that pushed the lead to 15-10. Jess Bird finished off the set with a kill on her first swing

Wilkinson went to work in the second set with eight kills on 10 swings, but it was DePaul winning the marathon set. Creighton trailed 20-18 late before rebounding to own set point chances at 24-23, 25-24, 26-25 and 27-26. CU could not convert any of those, and DePaul finally won the set on its third chance at 31-29. Colleen Smith dished 14 assists for DePaul in the second set to hep the Blue Demons hit .279.

Creighton regained control of the match with a 25-21 win in the third set. Dimke had nine assists, three kills, a dig, a block and an ace in the frame. Wilkinson put down a kill to end the third frame and give CU a 2-1 lead.

DePaul soared to a 6-3 lead in the fourth set before Ballenger embarked on a 13-0 serving run that featured three aces. The run outlasted a pair of DePaul timeouts and included seven Bluejay kills, two aces and three DePaul errors.  When it was all said and done, Creighton owned a 16-6 lead and had firm control. DePaul got no closer than seven (23-16) the rest of the way, as a kill from Smith ended the day. Smith had five kills in five swings during the last set while adding a pair of blocks.

Creighton hits the road next weekend for a pair of matches, playing at Xavier on Friday and at Butler on Saturday.

Colleen Smith recorded her third-straight double-double with 37 assists and 11 digs. The senior matched her double-double total from last year.

Myah Reed finished with a team-high 14 kills for the Blue Demons. She was followed by Brittany Maxwell with 12, including five blocks.

Haley Bueser secured a team-high 12 digs on the back line.

Creighton benefited from the home court to start the match, riding momentum to a 9-3 lead in the first set. The Blue Demons cut the deficit to one at 11-10 after Reed found enough space to secure a kill. After the DePaul push, the Bluejays rallied for four points to build the lead back to five. Creighton closed the set by winning six of the final seven points.

The second set featured 15 ties and six lead changes, resulting in the tightest set of the afternoon. Late in the set, the Blue Demons rallied to tie the score at 23-all and forced a Creighton timeout. The Bluejays answered with the next point that gave them a chance at set point. A clutch kill by Claire Anderson tied the match again at 24-all. The two sides were deadlocked at points 25 through 29 before an attacking error from Creighton and a kill from Maxwell secured the second frame for DePaul.

The tight play continued into the third set with DePaul tying the match at 9-9 thanks to a Maxwell kill. Creighton jumped to a four-point lead after with a 4-1 run and built its lead to seven at 21-14 after a DePaul error. The Blue Demons crawled back into the frame and forced Creighton to call a timeout after Smith recorded a service ace to make the score 22-19. Coming out of the timeout, the Bluejays found a late push that helped them win set three, 25-21.

DePaul carried a 6-3 lead in the fourth set before Creighton landed a big rally to pull away from the Blue Demons. A pair of 3-0 rallies by DePaul were not enough to catch the Bluejay lead and Creighton went on to win the fourth set, 25-17, and the match.

The Blue Demons return to McGrath-Phillips Arena for their next BIG EAST match. DePaul hosts Villanova on Friday, Sept. 30 at 7 p.m. CT to start a three-match home stand for the Blue Demons.