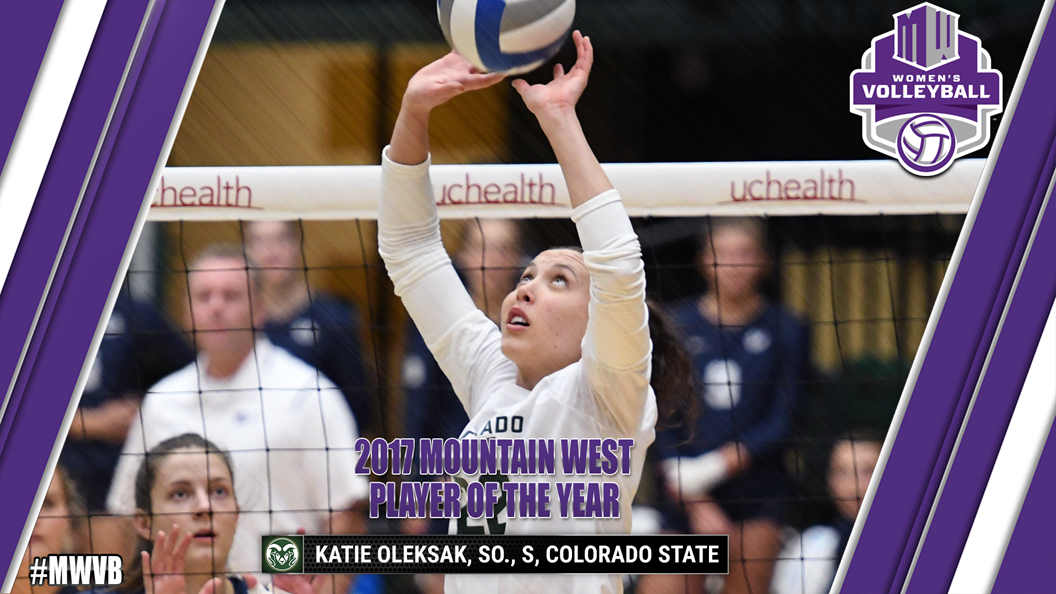 Oleksak, who was the 2016 MW Freshman of the Year, becomes the eighth Ram in the last nine seasons to earn the league’s top individual honor. The Phoenix, Arizona, native led CSU to its 14th Mountain West tile in program history this season. The setter topped the league with 12.16 assists per set. Oleksak was a key component to Colorado State leading the Conference in hitting percentage (.319), assists per set (13.44) and kills per set (14.36). The sophomore added 35 kills, 125 digs, 54 blocks, 13 service aces and three double-doubles during league action.

Runnels is the second Ram in as many seasons to be named MW Newcomer of the Year, and the fourth overall in program history. The outside hitter paced the Rams, while ranking eighth in the Conference in kills per set at 3.32. The redshirt freshman hit .277 during league play, while also contributing 36 digs and 29 blocks. The native of Bakersfield, California, recorded double-digit kills in 10 of 18 MW contests, including a season-best 20 versus New Mexico on Oct. 21.

Hilbert earns his 10th career MW Coach of the Year nod, and first since 2013. Hilbert led Colorado State to a 17-1 league record and a 27-3 mark overall in 2017. This marks the ninth season Hilbert’s Rams have finished MW play with one or fewer losses. Under Hilbert’s direction, CSU captured its 14th Mountain West crown and will make its 23rd-consecutive trip to the NCAA Tournament.

Harmon is the fourth student-athlete in Wyoming history to be tabbed MW Freshman of the Year. The setter ranked third in the Conference in assists per set at 10.60. Harmon helped the Cowgirls finish second in the league in hitting percentage (.249) and fourth in kills per set (13.54) during league play. The native of Frisco, Texas, posted seven double-doubles over 18 MW contests, which were the third-most in the Conference.

Boise State’s Sierra Nobley was tabbed to the MW All-Conference team for the fourth-consecutive season, becoming just the fourth student-athlete in league history to accomplish that feat. The Broncos’ Maddi Osburn and San Diego State’s Deja Harris both garnered all-league honors for the third year in a row. Four players made a second appearance on the 18-member postseason team – Colorado State’s Jasmine Hanna, Kirstie Hillyer and Oleksak, and Lauren Anderson of Utah State.