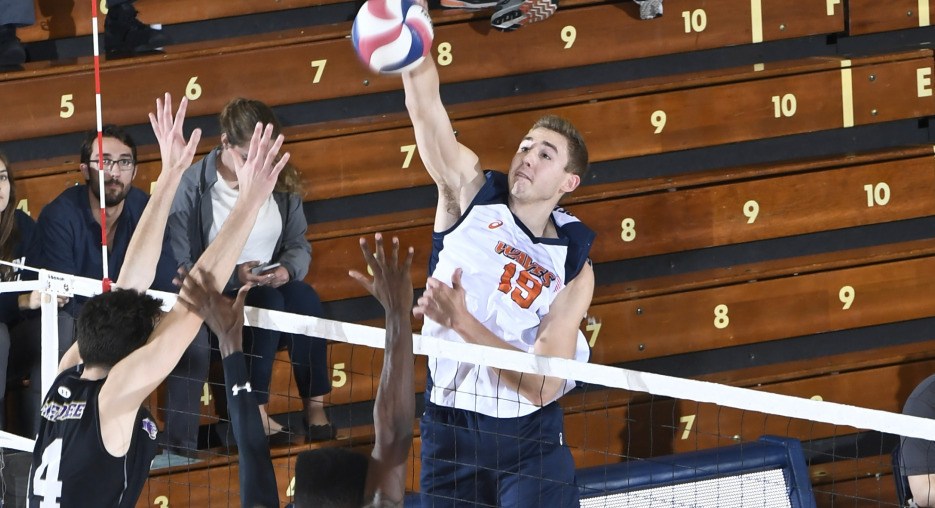 Redshirt-sophomore David Wieczorek, of the 9th-ranked men’s volleyball team, tabbed his first career Mountain Pacific Sports Federation player of the week honor this Monday as released by the conference office for leading the Waves to two MPSF wins this week.

Wieczorek (Chicago, Ill./Loyola Academy) led the Waves to two MPSF wins last week, first with a four-setter over Cal Baptist and then in a five-setter against USC.  He posted 4.39 points/set on a .356 kill/set effort with a .413 overall attack percentage.  Wieczorek also amassed 0.56 aces/set, 0.44 blocks/set, 0.89 digs/set and 0.33 assist/set.

In nine sets played, the redshirt-sophomore posted 32 kills with only six errors on top of 63 attempts, along with five aces, eight digs and four blocks including one solo.

Against USC on Saturday, he was instrumental again with 17 kills on a career-best .536 hitting percentage.  He produced a season-best four aces, with two blocks and two digs.  Against CBU on Thursday, he led the Waves with 15 kills on a .314 success rate, while adding an ace, six digs and two blocks including one solo rejection.

This MPSF weekly accolade is the first of any Wave this season.

Next on the docket for the Waves is a trip to Long Beach State on February 2as Pepperdine takes on the 49ers in Walter Pyramid at 7 p.m.  Follow Pepperdine @PeppVolleyball on Twitter and Facebook for immediate updates and head to PepperdineWaves.com for recaps, results and more.