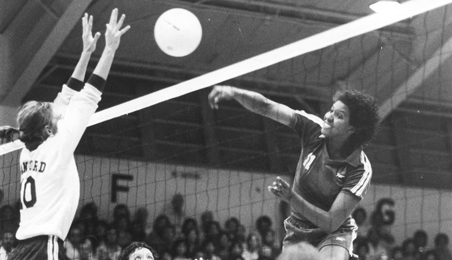 The name Deitre Collins-Parker is one that Hawaii volleyball fans will always remember. Now, in her 23rd year heading up a volleyball program of her own, Collins-Parker returned to The Aloha State to share paradise and memories with her San Diego State squad. Current Photo via Hawaii Athletics

The name Deitre Collins-Parker is one that Hawaii volleyball fans will always remember. The three-time All-American and two-time national player of the year guided the Rainbow Wahine to a pair of national titles (1982, 1983) and a memorable 110-5 three-year stretch.

Now, in her 23rd year heading up a volleyball program of her own, Collins-Parker returned to The Aloha State to share paradise and memories with her San Diego State squad.

The Aztecs joined Portland and Idaho, competing in the Outrigger Volleyball Challenge hosted by Hawaii Sept. 6-9.

“It’s always awesome (coming back to Hawaii) because the people are amazing,” Collins-Parker said. “I still have a lot of friends there and boosters are still around from when I played. They are just always so very welcoming and kind.”

First time ever two #HawaiiWVB alums coaching against each other as UH’s Robyn Ah Mow-Santos takes on San Diego State’s Deitre Collins-Parker! Both were All-Americans at Hawai’i under Dave Shoji and both played for the US Olympic Team! #GoBows🌈🏐 #NCAAvb pic.twitter.com/kGZTlx0gcM

In addition to playing three matches against strong competition San Diego State players and staff got to see the island through an expert’s eyes. The team was treated to a home-cooked meal thanks to the work of Rainbow Wahine boosters, made its traditional trip for breakfast to Koa Pancake House and more.

Collins-Parker is thankful for the experiences she gained as a player and her growth as an individual at Hawaii. Her lengthy coaching career has been spurred on by her passion for the game and competitive drive. She is motivated to provide her Aztecs with the same feeling of pride when they look back at their playing careers.

“The thing I got from Hawaii was that I got to be the best player I could be,” Collins-Parker said. “I came in pretty raw and left a decent volleyball player. At San Diego State we don’t have the same wins and losses that we did in Hawaii, but I hope my players walk away feeling like they became the best volleyball player they could be, whatever that looks like to them… As a coach I had to understand that success may look different than when I played. Making sure they graduate and experience growth as individuals are important.”

What sets Hawaii apart from other places?
“The people. It’s what makes Hawaii special. It’s who they are.”

What has been the biggest change in your lengthy coaching career?
“When you first start coaching you coach by what you know and the experience you have. I’ve been in coaching for over 22 years now, and I’ve changed drastically. Kids are different than how I was. The biggest lesson I had to learn as a coach is that they aren’t me. I’ve spent a lot of time over the years trying to grow and evolve and better adapt to the type of person that I have become. It’s just generational, trying to better understand what motivates these athletes because the motivations that worked back in the day don’t work anymore.”

What is similar between your playing and coaching careers?
“I have the same competitive drive. No matter what, you’re always striving to be your best. And the love of the game. Wanting your players to succeed and experience success however that looks.”

Biggest compliment you received on your trip back to the island?
“One of the aunties as they call them said how wonderful our team was and how appreciative our players were. That doesn’t always happen. That was my most proud moment because they felt like I was teaching my team good life lessons.”

What is something Hawaii visitors must experience?
Sunrise at Makapuu Beach

San Diego State went 0-3 on the weekend, and is just 1-8 so far this season with a three-match homestand on the horizon. Last season, the team went 16-15, including 10-8 in the Mountain West to tie for 3rd place in the conference. The team has had winning seasons in 6 of Collins-Parker’s 9 years as head coach, for an overall 146-127 record (.534).