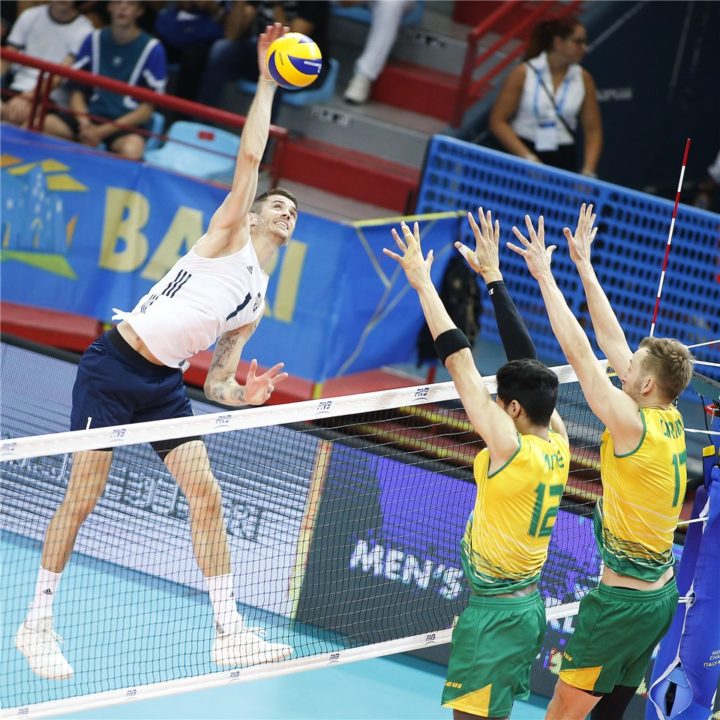 The United States moved to 2-0 atop Pool C, holding on for a five-set win over Australia on Thursday.  Current Photo via FIVB

The United States moved to 2-0 in Pool C play, holding on for a five-set win over Australia. For now, the Americans sit atop the group with two five-set wins, but have left some point on the table by going the distance. Cameroon, which won via sweep on Wednesday,  and Serbia (0-1) meet later this afternoon to wrap up Day 2 play. Russia also has one 3-0 win to its credit.

The United States served up seven aces to hold on for a five-set win over Australia to claim its second victory of the World Championships on Thursday.

“We are happy with this second victory in Pool C,” USA libero Erik Shoji said. “After the fixture against Serbia, we won against Australia. We regret that we could not take three points, but the opponents on the other side of the net never gave up. We were not ready for the substitutions they made. There is a lot of enthusiasm and confidence in our team. Today we made a step forward towards reaching the goal to finish as one of the top two teams of this pool. Tomorrow we will relax and start preparing for the big match against Russia.”

Matt Anderson was the top scorer for the Americans with 20 points on 18 kills and two aces. Taylor Sander (16) and Aaron Russell (14) were right behind, doing all of their scoring on offense. Max Holt registered seven points, turning in six kills and a block, while Taylor Averill chalked up two kills, a team-best two blocks and two aces. Setter Micah Christenson led the way from the service line with three aces.

Lincoln Williams posted a match-high 21 points on 19 kills and two aces, despite not entering the match until Set 2 as a replacement for captain Paul Carroll. Max Staples also made the most of his late entry to the match, notching 12 points (9 kills, 2 blocks and an ace) after two sets as a substitute. Starters Beau Graham and Nehemiah Mote added nine points apiece, each putting up a match-leading four blocks and five putaways. Eleven players saw the court for the Volleyroos.

An Averill block capped a tight Set 1 at 25-23 for the Americans. After falling 25-20 in Set 2, Australia continued to fight, eventually grabbing the lead at the second technical timeout of Set 3 and sealing a 25-22 win on a Paul Sanderson putaway. The Aussies won Set 4 throughout, sending the match to a decisive fifth set.

“The point we claimed today was crucial in the race for the top four spots in the ranking of Pool C,” Australian coach Mark Lebedew said. “I am happy since we proved to have a good asset to play volleyball even when facing a high-level and tough team like the United States. The turnover of the players taking to the court was pivotal to making the difference on the game flow. I am very lucky to coach such a skilled and balanced roster. This was somehow special, I mean to mount such a comeback and play the match point-to-point at the tie-break.”

After winning the first two sets, the United States opted to give Daniel Mcdonnell a shot in the middle replacing Max Holt. In Set 4, Holt reappeared and remained in the match the rest of the way.

Jeff Jendryk and Ben Patch saw times as substitutes in Set 2 and Set 4 respectively, marking the only other changes throughout the five-set affair.