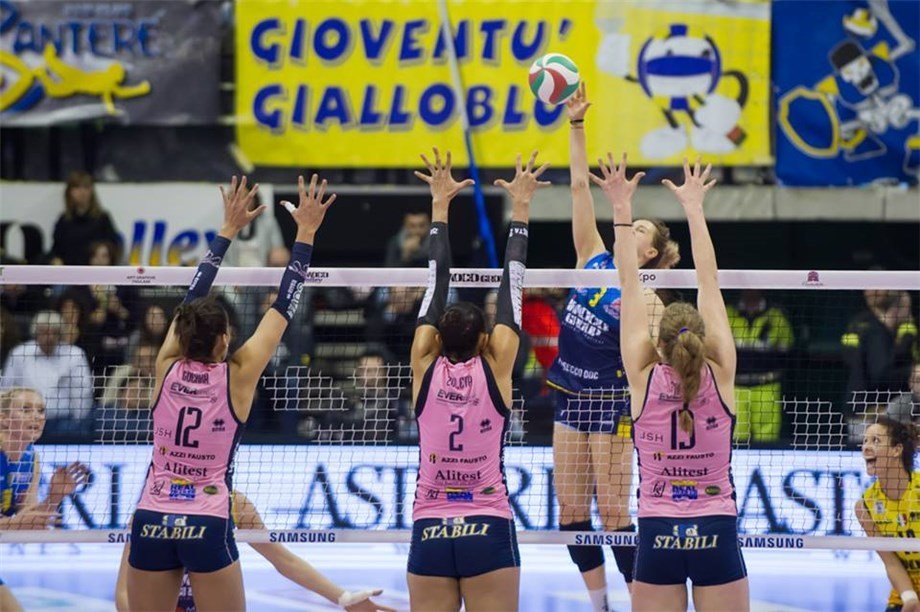 The quarterfinals of the Italian Samsung Gear A1 League began play with three five set matches and two road victories – shaking things up on the women’s side of things.

Starting their quarterfinal play at an 0-2 deficit, defending champions Imoco Volley Conegliano fought their way back to force a five set tie-break. The late comeback was not enough of a surge to propel the team to victory, as Il Bisonte upset Conegliano in five 3-2, (25-18, 25-15, 23-25, 17-25, 15-10). Bisonte had an all-around offensive performance from three players that scored over 20 points in the match – Stephanie Enright (23), Indre Sorokaite (22) and Odina Bayramova (20). Their dominance showed in the stats with 15 to nine blocks and 68 to 53 in kills over Conegliano.

The reigning European champions Pomi Casalmaggiore secured their match in five sets 3-2 (25-21, 26-28, 23-25, 25-17, 15-11) over Unet Yamamay Busto Arsizio. Pomi fought from a 1-2 deficit to comeback in the fifth to down the other side with the help of Valentina Tirozzi’s 24 points and Lauren Gibbemeyer’s 18. For the losing squad, Brayelin Martinez scored 23 points in the effort.

The Pomi win comes just days after Busto was able to edge Pomi out of the semifinals in the second-tier European CEV Cup.

The next round of matches in the quarterfinal series will be on April 17.