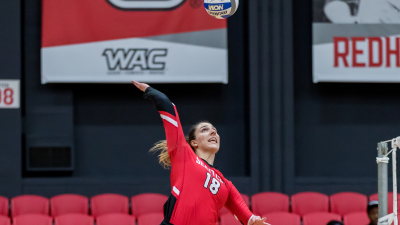 Denver University has made a big splash in the recruiting market in former Seattle outside hitter/pin-player Katarina Marinkovic, who also is in the Serbian National Team system. Marinkovic will be a junior in the fall with two years left of play.

In her two seasons with Seattle, Marinkovic totaled 686 kills on a .212 hitting percentage, 385 digs, 90 blocks and 65 aces. Additionally, for her performance she was named to the All-WAC First Team in 2017 after she was WAC Freshman of the Year and WAC All-Freshman Team in 2016.

The 6’2″ pin player from Belgrade, Serbia attended Radnicki Beograd in her prep career. She has been a member of the Serbian National Team for four years including a Women’s U20 World Championship in 2015 as a wing-spiker.

The addition of Marinkovic gives Denver five outside hitters for their current 2018 roster. It’s also the third transfer splash for the Pioneers with former Colorado right side/setter Taylor Joachim and former McHenry County College outside hitter/right side Katie Mahoney joining the team as well.