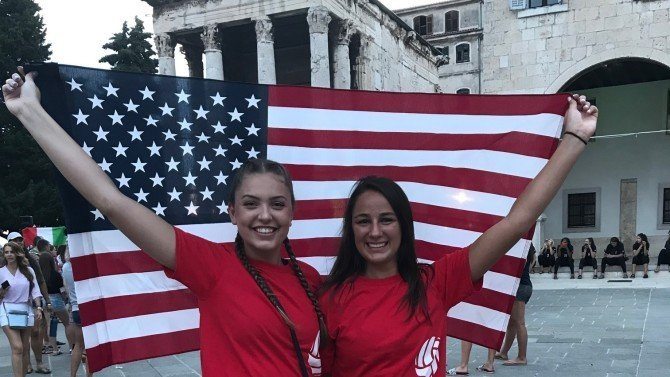 Brittany Maxwell had a unique opportunity earlier this month to check off a bucket-list item and make up for lost development... Current Photo via DePaul Athletics

Brittany Maxwell had a unique opportunity earlier this month to check off a bucket-list item and make up for lost development time on the volleyball court.

The DePaul junior acquired her first passport and boarded a plane July 6 to play in the July 11-14 European Global Challenge in Pula, Croatia while also visiting Prague, Vienna, Venice and Maribor, Slovenia on the 10-day trip.

Maxwell’s first trip to Europe brought her together with nine other volleyball players from Midwest colleges on the U-23 BIP Midwest Team.

BIP Midwest went 3-1 in the tournament and finished third in the Gold Bracket. Maxwell and her teammates faced opponents such as the U-23 Czech team, the U-23 Israeli team and the USA College National Team along with two friendlies.

“I thought the level of play at the tournament was pretty similar to the level we encounter during the DePaul season.” Maxwell said. “The international game has a different style and pacing, but the competition, with the exception of the USA College National Team, was comparable to BIG EAST volleyball.”

After Brittany’s 2016-17 volleyball season was cut short because of injury, DePaul volleyball coach Nadia Edwards leaped at the suggestion made by her 2016 All-BIG EAST First Team right-side hitter to compete in the European Global Challenge.

“Brittany actually came to me and told me she’d be interested in playing in the tournament.” Edwards said. “I thought she’d be perfect to represent DePaul and our Midwest region over there. Because of how she ended last season, I think she wanted to get back, gain experience and be able to transition into the DePaul season in a positive way.

“It was a very stacked and talented group that they put together to come out of the BIP Midwest. To be on such a talented roster definitely helped her grow as a player and learn more about herself.

“With players in this tournament from both America and overseas, it was a great challenge. I think Brittany was probably challenged in ways she hadn’t been before, which is only going to help her grow and to play off the experience going forward.”

Competing alongside so many other talented volleyball players, Maxwell is determined to take the lessons she learned from her injury and from the tournament into the upcoming season.

“The main thing I took from my injury last year was mental,” Maxwell said. “Sitting on the bench, you’re able to see the game from a different perspective, which teaches you a lot. While I got back into the rhythm of playing at the tournament, the time I spent on the sideline absolutely helped me become a stronger, smarter volleyball player.

“At the Europe Global Challenge, our BIP Midwest team got along really well. Even though we were only together for 10 days, I believe our chemistry off the court helped us play better on the court.

“This is something I really want to take with me into the fall season. Our DePaul team getting along better this upcoming year is only going to help us play better.”

Edwards is ready for Maxwell to finish what she started last year while also taking a step forward as a leader.

“Brittany comes from a place of unfinished business,” Edwards said. “She had such a phenomenal start to the regular season and conference season last year and was a big part of our play in conference the first half. Because she was not able to finish last season, I know she will come into this season really motivated.

“Last year she was named All-BIG EAST, and I know that she is going to strive to do that again and be even more of a leader on and off the court. She leads by example just in terms of how she does things. I know she is one of our captains, and she’s in position to help this team and program do something they haven’t done before.”