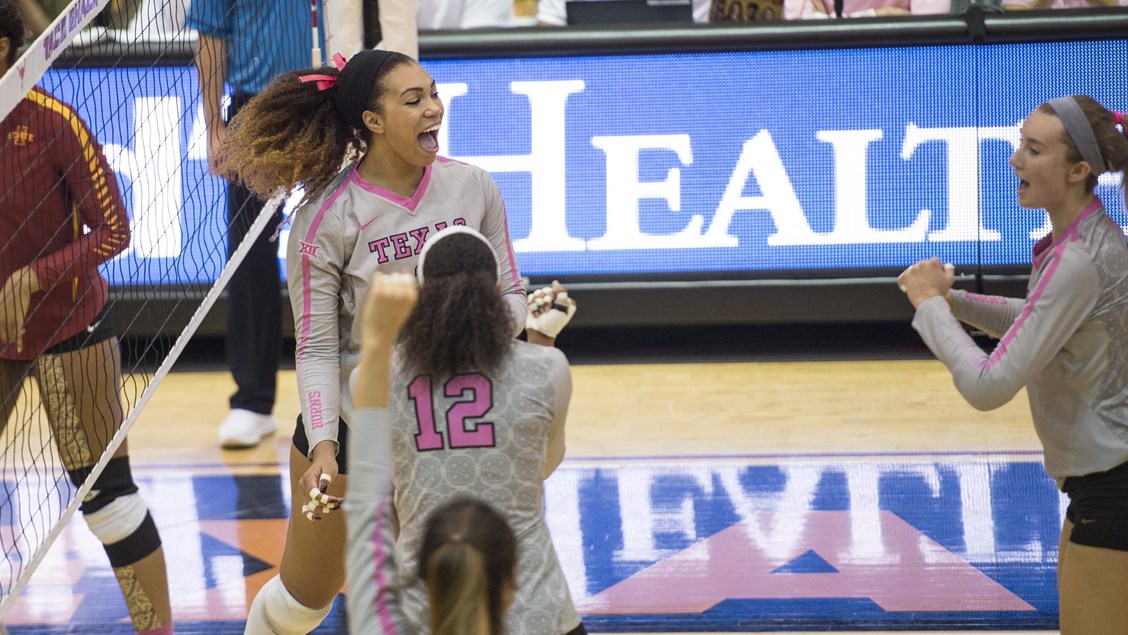 The Longhorns started things off strong with an 8-5 lead early. A kill from Jess Schaben stopped a 2-0 run from Texas but Ebony Nwanebu stepped in with a kill. With things at 11-7 for Texas, Samara West put down a kill to make things 11-8. An Iowa State service error sparked a 4-0 run for the Longhorns that featured two blocks from the Longhorns and a kill from Chiaka Ogbogu. Late in the set, Texas was leading 21-15 but Avery Rhodes made it 21-16 with a kill. Another Cyclone service error ignited a run for Texas as they finished the set on a 4-0 run with a block and two Iowa State hitting errors for a 25-16 first set score.

The second set began as a tight battle at 6-6, but a 3-0 Texas run on kills from Lexi Sun and Morgan Johnson, along with a Micaya White/Johnson block brought the score to 9-6. Iowa State stayed close though with the score at 16-14 mid-set. A Johnson kill started a 7-0 run for the Longhorns to bring the score to 23-14. The Cyclones fought back three points but the initial run was too much as a service error ended the set 25-17.

An Iowa State 4-0 run started the third set with an ace from Monique Harris and Schaben posting two kills and a solo block over Nwanebu. They continued to hold onto their lead over the Longhorns until another 7-0 run brought Texas back out of the hole at 12-9. The Cyclones responded with a 3-0 run of their own to tie things up at 12-12 with a tight battle forging at 15-14 Texas. A 6-0 run stopped the Cyclone momentum in their tracks starting with an Ogbogu kill. Grace Lazard stopped the run with a kill before Ogbogu took things back with one of her own. A Nwanebu kill ended the match at 25-18.

Nwanebu led the Longhorns with 11 kills while Sun and Ogbogu added another nine and eight, respectively, in the win. Ogbogu posted six blocks while Johnson and Nwanebu contributed five and four, respectively. White picked up a team-best 14 digs while Cat McCoy added another 11.

For the Cyclones, Schaben put down nine kills and three blocks while Hali Hillegas picked up a match-best 16 digs.

In Texas’ second victory against a ranked opponent in one week, Nwanebu recorded a .474 hitting percentage on 19 swings, with 2 errors and 11 kills.

Texas forced Iowa State’s second match on the season being outblocked, with an 11.0 to 5.5 advantage over the Cyclones.

Outhitting Iowa State .323 to .121, Texas recorded a 10th match out of 16 on the season with a hitting advantage over its opposition.

A quick dump from Ashley Shook opened Texas’ first three-point lead of set at 5-2 in the fist frame. As the teams settled in, exchanging points, pressure on Iowa State forced a timeout from the Cyclones at 15-8. With Nwanebu leading the Longhorns’ attack through three kills without error, a 9-4 run secured the set at 25-16.

Texas’ offense began to fire in the second set, pushing a .529 clip as Sun joined Nwanebu in leading the Longhorns’ attack. Beginning to find gaps in Iowa State’s defense as a media timeout gave pause at 15-11, Texas executed a 9-5 run up to set point at 24-16. Iowa State saved one before a service error gave Texas a 2-0 match score advantage.

On the verge of being swept, Iowa State opened the third frame swinging, starting 4-0. But with the Longhorns covering as White and McCoy reached double-digit digs, Texas drew hitting errors from the Cyclones and replied to jump back out to lead on the set. With match point at 24-18, a kill from Nwanebu secured the sweep.

The Longhorns head out on the road next week for matches at Texas Tech and Oklahoma. Texas’ match against Texas Tech takes place on Wednesday, Oct. 18, with a 6 p.m. start.

On the match: We did what we were supposed to from the scouting report, we were playing really good defense behind the block and were scoring at a high level.

On playing three games in seven days: It was one of my concerns, I told them that yesterday—that we have been going for 10 days straight, so the emotional side of this can catch up to you sometimes. Luckily we came out and played well. It just seems that we are playing better for longer periods of time and learning to concentrate for longer periods of time. It was a really nice job for our team tonight.

On rallying in the third set: I think the atmosphere on the court wasn’t as high as it was in the first two sets. We kind of let up and they got up on us. As a team, we decided to turn it around, started going hard like we did the first two sets. I think that’s what really changed the momentum. As that went on, we got better and better with our energy level.

On their confidence level in the third set: I think Jerritt called timeout when we were down 4-0 and just told us to settle down, not get frantic or panic, I think we went back and did that. I think that’s what helped us get a couple points back and eventually get the win.

The Cyclones were held to a .121 hitting percentage while Texas fired to a .323 hitting clip. The ISU effort was led by nine kills, four digs and three blocks from Jess Schaben. Hali Hillegas led the Cyclone backrow with 16 digs.

Set One: Texas 25 Iowa State 16
Texas went on a 6-1 run to make a 9-7 lead into a 16-9 Horns advantage. Struggling to slow down the UT attack, ISU switched over to a 6-2, which did yield some early results to help cut Texas’ lead to 18-14. However, the UT block smothered the ISU attack, as the Cyclones were rejected five times at the net and restricted to a .103 hitting percentage. UT took a 1-0 lead when Jess Schaben sent her back-row attack wide at 25-16, Longhorns.

Set Two: Texas 25 Iowa State 17
The two teams traded the first 12 points, but Texas eventually made the breakthrough, going on a 3-0 run to open a 9-6 edge. Again, it was the UT block causing ISU problems, as the Horns stuffed three more ISU shots while moving ahead 14-10. UT opened its lead to six, but they were their own worst enemy as three-straight errors cut Texas’ lead to 16-14. The Longhorns pulled back ahead, going on a 7-0 run to make it 23-14, and getting ahead 2-0 when Hali Hillegasserve wide to make it 25-17, Texas.

Set Three: Texas 25 Iowa State 18
Iowa State won the first four points of the set, with the serve of Monique Harris troubling the UT pass. The Cyclones were able to hang onto that four-point edge briefly, but the Longhorns were back ahead soon enough via a 7-0 run that put them ahead 12-9. Iowa State worked their way back to tie it at 13-13, but the Horns were able to stay ahead this time around. The Cyclone offense continued to struggle, as the visitors hit just .184 in the final frame. UT completed the sweep when Ebony Nwanebu fired a kill off the ISU block to make it 25-18.

Up Next
Iowa State is back at Hilton Coliseum on Wednesday to host West Virginia. First serve between the Cyclones and Mountaineers will be at 6:30 p.m., with Cyclones.TV Powered by Mediacom televising the match.