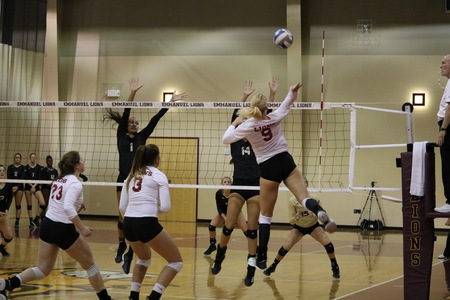 This years AVCA NCCAA National Player of the Year goes to Emmanuel College’s Julie de Blanck. The formal presentation of the award will be made in conjunction with the 2017 AVCA Convention and NCAA Division I National Championships on December 15 in Kansas City, Missouri.

On the year, de Blanck posted 414 kills for an average of 3.48 kills per set on a .284 hitting clip while also accumulating 141 blocks for an average of 1.18 blocks per set. De Blanck also produced 40 aces on the year. De Blanck’s 1.18 blocks per set ranked third nationally in the NCCAA. De Blanck was also named the Player of the Year by the NCCAA and was named to the NCCAA All-Tournament Team and as an AVCA NCCAA All-American.

This season was the most successful in Emmanuel program history, as the team finished 20-13 on the year, losing in the NCCAA National Tournament semifinals against Campbellsville in three sets.

De Blanck is the first player from Emmanuel to receive the honor since the induction of the award in 2009.