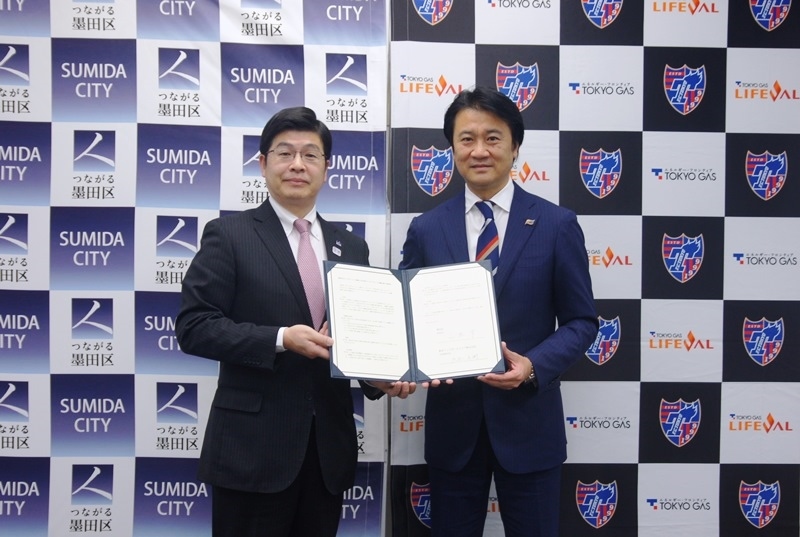 On Tuesday in Tokyo’s Sumida City (Sumida-ku), FC Tokyo‘s volleyball team announced that they had reached an agreement with the... Current Photo via FC Tokyo

On Tuesday in Tokyo’s Sumida City (Sumida-ku), FC Tokyo‘s volleyball team announced that they had reached an agreement with the Sumida City government for the team to host their home games at the Sumita City Gymnasium for the 2018-2019 V.LEAGUE season. In the picture above the Sumida City Mayor Toru Yamamoto (left) and FC Tokyo‘s Representative Director and President (both for soccer and volleyball) Naoki Ohgane (right) are shown with their agreement.

With the V.LEAGUE shifting from a schedule of teams of having few home matches, to a schedule providing a home court advantage with more home matches, FC Tokyo was looking to find a single venue for the teams home matches. In the 2017-2018 season, FC Tokyo played at four different venues in Tokyo. The Tokyo Metropolitan Gymnasium for the opening match (considered a neutral site match for opening day), the Ota City General Gymnasium (have played home matches there in the past), Komazawa Volleyball Courts (which hosted the 1964 Tokyo Olympics volleyball matches) and the Sumida City Gymnasium. FC Tokyo played two home games at the Sumida City Gymnasium in January 2018, and drew over 1,650 people in attendance for each match. With the team shifting to so many locations around the Tokyo area, one venue in the west, south, central and east of the Tokyo metropolitan area, which are located 30 minutes to an hour away from each other made it very difficult for the team to attract fans. Also not winning many matches did not help either, but FC Tokyo has been a part of the Premier League since 2009-2010 season and for those people wanting to see top level men’s volleyball in the Tokyo area, this will be a great help.

The Sumida City Gymnasium is located near Kinshicho station, which has access to subway and Japan Rail (JR) East train lines. The arena’s main hall has capacity for 2,000 and has been used as a venue for basketball and futsal (5-on-5 indoor soccer) in the past.