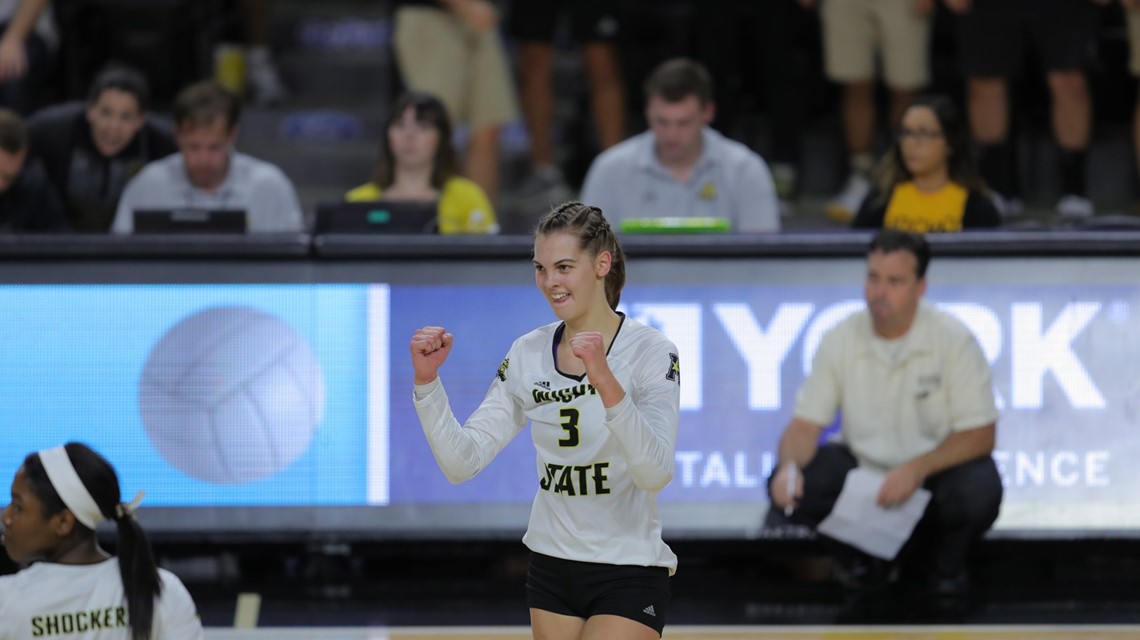 Wichita State senior outside hitter Mikaela Raudsepp, who had a standout year in helping leading the Shockers to a 29-4 mark and an NCAA second round berth, wrapped up her career with AAC Female Scholar-Athlete of the Year nods.  Current Photo via Wichita State Athletics

PROVIDENCE, Rhode Island – Wichita State senior outside hitter Mikaela Raudsepp had a standout year in helping leading the Shockers to a 29-4 mark, the American Athletic Conference’s regular season title and an NCAA second round berth. That, coupled with her work in the classroom has brought the Dundee, Oregon native, a $4,000 scholarship for graduate or professional studies and the title of 2017-18 AAC Female Scholar-Athlete of the Year.

Rausepp downed double-digit kill tallies in 16 matches, including a season-high 23 at Temple. She hit .300 or better in 10 contests, including .500 or better twice. The senior pulled up 10 or more digs in five matches. She notched three double-doubles, including an 11-kill, 10-dig and six block effort in the NCAA second round match vs. Missouri.

On the academic side of things, Raudsepp was named second team CoSIDA Academic All-District and to the AD’s honor roll for Fall 2017 with a 4.0 GPA.

Raudsepp is the third volleyball player to earn AAC Female Scholar-Athlete of the Year honors since the award’s inception in 2013-14 following Houston’s Kadi Kullerkann (2014-15) and SMU’s Avery Acker (2015-16).

Congratulations to @GoShockersVB's Mikaela Raudsepp, chosen as the volleyball AND overall 2017-18 American Athletic Conference Female Scholar-Athlete of the Year!