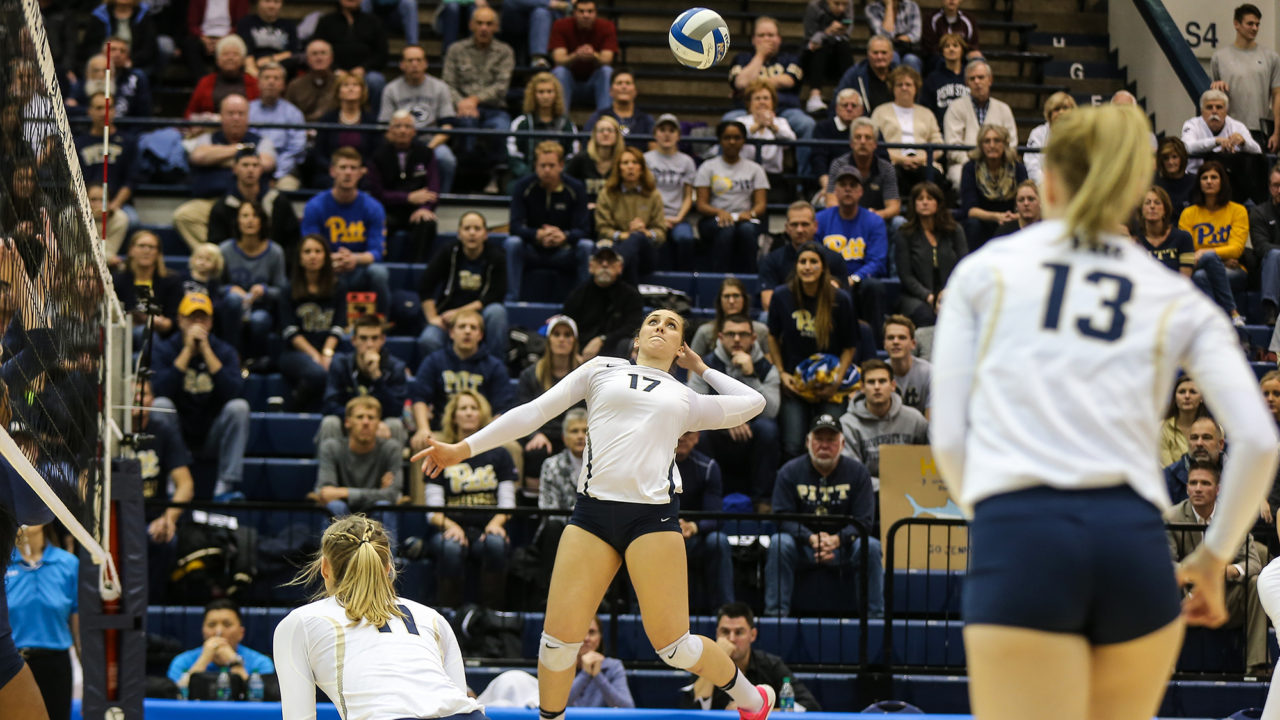 Tallahassee, Florida – Pittsburgh continued to solidify their spot as maybe the ACC’s top contender with a road win against Florida State in four sets.

Pittsburgh had incredible balance throughout the match as five players posted double-digit kills compared to just two for Florida State. That helped the Panthers hit .278 compared to the Seminoles’ .242. Beyond that, where Florida State dominated the block (16-5), Pittsburgh owned the back-row defense with digs (77-53).

Set one was an offensive battle that featured 10 ties and five lead changes. The final change came late as Nika Markovic (21 kills, .261, 13 digs) tied things at 23 for Pittsburgh before Stephanie Williams (15 kills, .250, 19 digs) knocked down back-to-back kills for the set victory.

Coming out of the break, things were tied through 34 points at 17-17. That’s when Pittsburgh went on a run to force set point, with Mariah Bell (15 kills, 10 digs) putting down set point for another 25-21 finish, but with Pittsburgh in front for the 2-1 set lead on the road.

Set four would be more of the same as three straight Williams kills gave Pittsburgh an 18-15 lead late. They never turned back as Layne Van Buskirk (13 kills, .423) and Chinaza Ndee (10 kills, .562) posted big numbers as well in the four-set victory.

This was the first match of four straight on the road for Pittsburgh, who now sticks around in Florida for a meeting in Coral Gables with Miami (FL). Florida State is done for the weekend and will wait til a week from today to take on Wake Forest in Winston-Salem.

“This was my first time winning in that building,” said head coach Dan Fisher. “While it meant a lot to me, I know it also meant a lot to Mariah [Bell] who has been at it a long time trying to get that win.”

“One of the things we want to do is be the team that is going for it. That was us tonight. The girls have been working hard all year, believing in themselves and now all of that hard work is paying off as we picked up a really big win.”

Pitt was dominant in its attack, as the Panthers tallied 74 kills with five players in double-digits. Leading the squad’s attack was junior setter Kamalani Akeo who tallied 55 assists in the match.

“A lot of times coaches say it was a team effort but this time it was clearly proven statistically,” said Fisher. “I can’t remember the last time we had all of our starters hitting in double-digits. We recorded more kills and digs than them, which tells me we were the more aggressive team.”

Sophomore Nika Markovic led the squad with 21 kills, while both redshirt sophomore Stephanie Williams and Mariah Bell posted 15. Sophomore Layne Van Buskirk and freshman Chinaza Ndeerounded out the players in double-digits, earning 13 and 10 kills apiece respectively. Ndee hit .562 on the match, while Van Buskirk hit at a .423 clip.

Williams, Bell and Markovic tallied double-digit kills as well to earn double-doubles. Williams recorded 19 digs, while Markovic had 13 and Bell 10.

Markovic and Ndee each had three blocks to round out Pitt’s defense.

Behind solid play on both sides of the ball, Pitt opened the match with a 25-23 win over Florida State.

The Panthers racked up 19 digs in the set compared to the 13 by the Seminoles, while out-hitting FSU .333 to .289. Markovic led both teams with six kills in the frame and hit .455.

Pitt got off to a quick start, tallying six straight points to get out to a solid lead. However, following a timeout by Florida State the Seminoles caught the Panthers and tied the set 8-8.

The two teams exchanged back-and forth leads through most of the set, but Pitt got back on track, finding an 18-14 lead on a kill by Markovic, hitting error by FSU and back-to-back points from Ndee.

The Seminoles were not finished just yet, at they came back once again to lead 23-22, but the Panthers roped off three consecutive points, including back-to-back kills by Williams, to end the frame.

Florida State tied the match at a set apiece after taking the second set 25-21.

The two teams got out to a tight start, remaining neck-and-neck through the early points. Pitt found a small lead 15-13, but fell behind soon after, 16-15 after three straight FSU points.

The Panthers called a timeout to regroup and did just that as Bell put away back-to-back kills to regain the lead 17-16.

Following that point, the Seminoles outscored the Panthers 9-4 to win the frame.

Three straight kills by Ndee, Van Buskirk and Bell gave the Panthers the first substantial lead of the set, 12-8.

Following a timeout by the Seminoles, Florida State worked its way back to tie the set 17-17. Pitt answered with a Markovic kill and a FSU hitting error, leading to yet another break by the Seminoles.

Florida State pulled within two in the final points of the set, but consecutive kills by Van Buskirk and Bell ended the threat.

The Panthers solidified their win in the fourth set, taking down the Seminoles 25-21. Pitt held Florida State to just 10 kills in the set, while the Panthers tallied 21.

The two teams battled it out in the final set, as the score remained tight through the opening points.

Pitt forced the first timeout, as the Panthers took a 17-15 lead on back-to-back kills by Williams. She made it three straight following the break.

Pitt worked their way to match point, but FSU didn’t go down without a battle as they fought off two match points to pull back within three, 24-21.

The Panthers called a timeout to regroup and returned to finish off the Seminoles with a final kill by Markovic.

Up Next
Pitt will close out the weekend in Coral Gables, Fla., as the Panthers take on Miami at 12 p.m. Sunday, Oct. 8. Fans can watch the match on ACC Network Extra or tune in to their local Regional Sports Network, including AT&T SportsNet Pittsburgh.