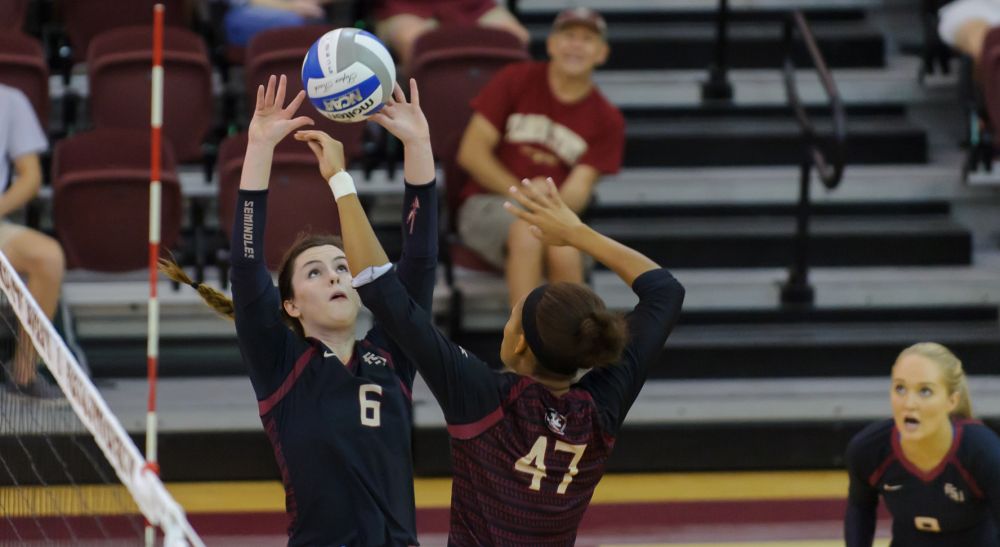 The Florida State volleyball team will head to in-state rival Miami for another midweek matchup with the Hurricanes. Current Photo via Florida State Athletics

The Florida State volleyball team will head to in-state rival Miami for another midweek matchup with the Hurricanes. The Seminoles (12-8, 6-6) beat the Canes (14-4, 8-4) in straight sets earlier this season in Tallahassee.

Florida State holds a 32-19-1 record over Miami, and has won nine of the last 10 meetings in the series. The Seminoles traditionally see a closer matchup with the Canes on the road, holding only an 8-7 record over Miami in Coral Gables.

This week, the Seminoles will head to Miami on Wednesday before taking on conference leader Pitt on Sunday. The Canes won both matches in Week 10, while the Panthers dropped only its second conference match of the season, falling to Louisville in Kentucky.

The Seminoles’ offense will be led by senior right side hitter Milica Kubura, who is currently averaging 3.68 kills per set, with 280 kills on 635 total attacks already this season. Natasha Calkins follows right behind her senior counterpart, averaging 2.79 kills per set (218 total) so far this season.

The offense has been supported by junior setter Brianne Burkert this season, as the Seminoles’ lead setter has already notched 668 assists (8.56 assists/set). Burkert has also recorded a double-double in 14 of the 20 matches the team has played so far, and has now recorded 27 double-doubles in her career. She recently became the first Florida State player to record multiple kill-assist-dig triple-doubles, accomplishing the stat line at Notre Dame and at home against NC State.

On the defensive side, senior libero Cecilie Woie leads the team with 337 digs (4.32 digs/set). Burkert follows right behind her with 241 digs (3.09 per set) already this season. Freshman middle blocker Taryn Knuth has been holding down the defense in the front row, leading the Seminoles with 108 total blocks (1.38 blocks/set) this season.

Last Meeting: The Seminoles swept the Hurricanes in straight sets earlier this season on Oct. 4th.