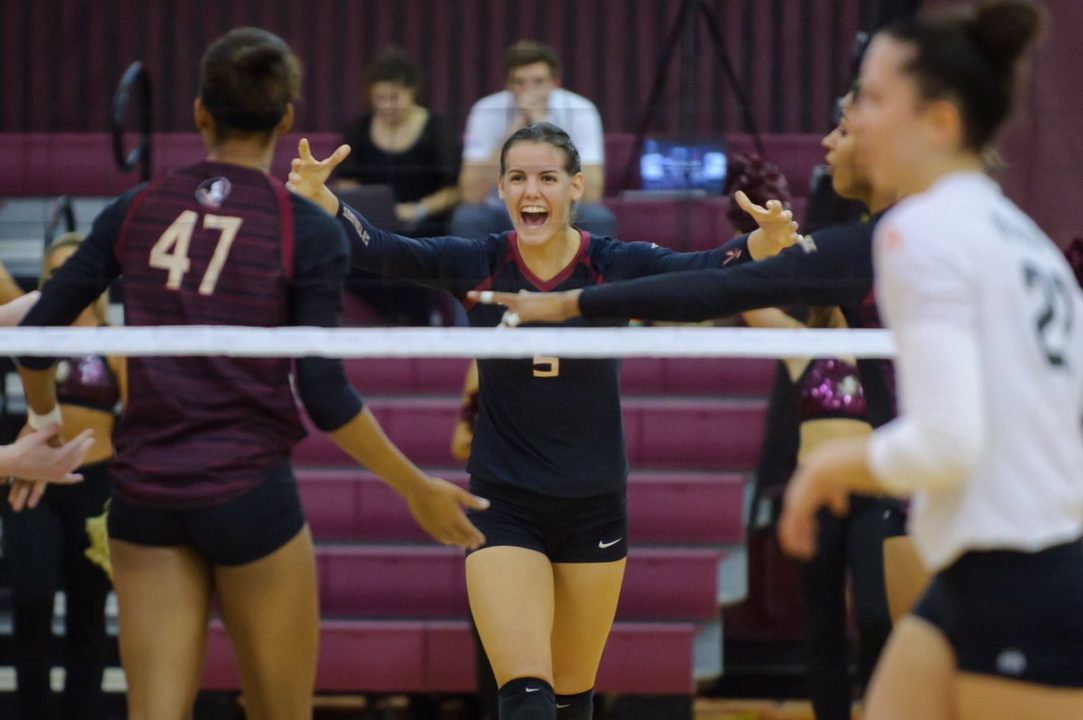 The Florida State volleyball team will stay home this weekend, taking on North Carolina on Friday (Oct. 27) and NC State on Sunday (Oct. 29).

North Carolina was tabbed as the ACC preseason favorite with Florida State following directly behind. Both teams have traditionally led the conference, and both were ranked in the AVCA Top 25 in 2016. This matchup will be the first in the series where neither team is ranked since 2010 – the Seminoles have been ranked in 12 of the last 13 meetings in the series.

This season, the conference has seen a shuffle in the standings, with NC State sitting at the top alongside Pittsburgh. The Wolfpack went on a nine-match win streak before falling to North Carolina on Oct. 18. That win moved the Tar Heels up to a tie for third in the conference next to Syracuse.

FSU holds a 46-6 record over the Wolfpack, including a 31-match win streak that spanned 16 years, all of which were decided in either three or four sets.

Florida State also leads in the series against North Carolina, although it has been close the last few years – the Seminoles have won seven of the last 11 meetings in the series. FSU holds the longest win streak in the series with eight matches that ranged from 1979 to 1986.

A pair of wins for the Seminoles this weekend would change up the top half of the ACC standings almost completely, as no team leads in the standings by more than one win.

The Seminoles’ offense will be led by senior right side hitter Milica Kubura, who is currently averaging 3.78 kills per set, with 257 kills on 583 total attacks already this season. Natasha Calkins follows right behind her senior counterpart, averaging 2.73 kills per set (191 total) so far this season.

The offense has been supported by junior setter Brianne Burkert this season, as the Seminoles’ lead setter has already notched 597 assists (8.53 assists/set). Burkert has also recorded a double-double in 13 of the 18 matches the team has played so far, and has now recorded 26 double-doubles in her career. She recently became the eighth different Florida State player to record a triple-double, which she accomplished against Notre Dame on Oct. 1.

On the defensive side, senior libero Cecilie Woie leads the team with 310 digs (4.43 digs/set). Burkert follows right behind her with 226 digs (3.23) already this season. Freshman middle blocker Taryn Knuth has been holding down the defense in the front row, leading the Seminoles with 98 total blocks (1.40 blocks/set) this season.

Last Meeting: The No. 10 Seminoles fell to the unranked Wolfpack in five sets at home on No. 4, 2016