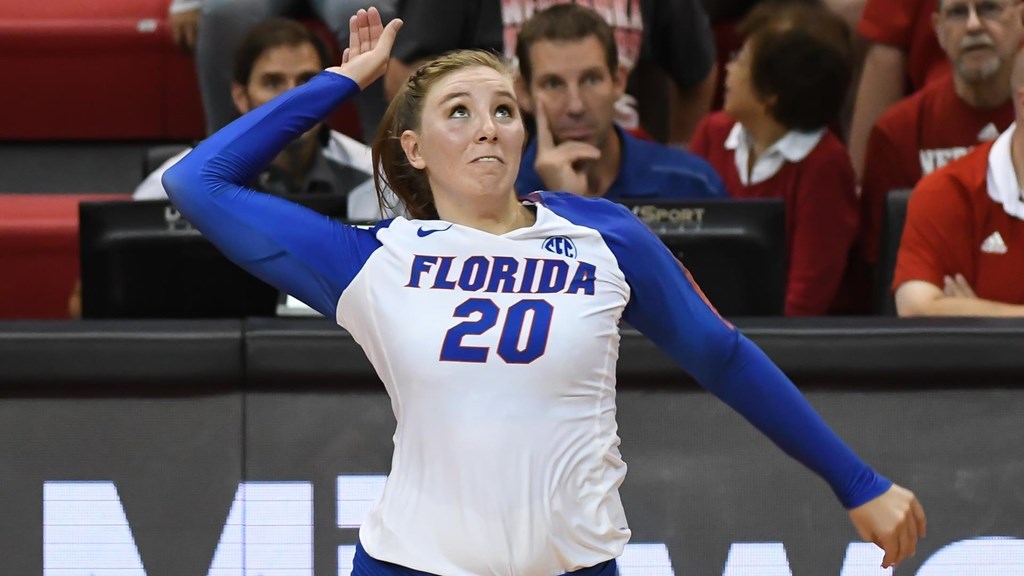 Gatorade National Player of the Year Thayer Hall earned SEC Freshman of the Week honors after piling up 41 kills and 21 digs vs. Nebraska and Texas, while Texas A&M's Hollann Hans was tabbed as the league's offensive player of the week with 5.18 kills and 2.09 digs per set.  Current Photo via Florida Athletics

SEC Offensive Player of the Week – Hollann Hans, Texas A&M
Hans was named to the Sports Imports D.C. Koehl Classic All-Tournament Team after recording 5.86 points, 5.18 kills and 2.09 digs per set along with a .339 hitting percentage. She currently leads the SEC in total kills (57), kills per set, total points (64.5) and points per set.

SEC Defensive Player of the Week – Cidavia Hall, Alabama
Hall was named the MVP of the Hampton Inn Charleston/West Ashley CofC Classic after averaging a league-high 1.80 blocks per set over three victories for the Crimson Tide. She posted a career-best seven total blocks against both Western Kentucky and Missouri State.

Congrats to Cidavia Hall, the @SEC Defensive Player of the Week!

SEC Setter of the Week – Meghan Donovan, Georgia
Donovan averaged 11.0 assists per set as the Bulldogs opened the 2018 season with three victories. She was named to the Benson Hospitality Invitational All-Tournament Team after earning double-doubles in all three matches (sets and digs). Donovan leads the SEC in assists and is ranked second on the team in digs as a setter (3.25) following the opening weekend.

The first @SEC Setter of the Week for the 2018 season is @meghan__donovan!

SEC Freshman of the Week – Thayer Hall, Florida
Hall earned a spot on the VERT All-Tournament Team after averaging 4.83 points, 4.56 kills and 2.33 digs per set. In her collegiate debut, she recorded 20 kills in Florida’s win at No. 2 Nebraska. Hall is currently ranked fourth overall and the top freshman in the conference in kills per set.