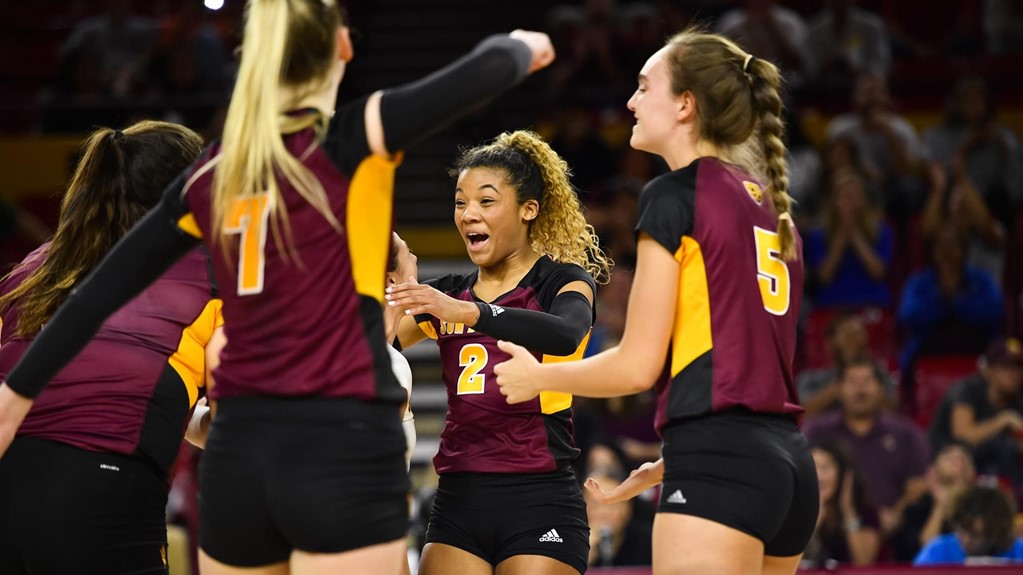 Alyse Ford, SR, ASU (Laguna Beach, Calif.)
6 KPS, .340 Pct., 6.4 PPS
• Notched back-to-back double-digit kills in an upset win over No. 14 USC (3-1) and a loss to No. 25 UCLA (3-1).
• Led ASU to its first win against USC since 2014 and its third win over a top-15 team this year with a match-high 25 kills on a .405 clip.
• Tallied 20-plus kills in both matches this weekend and in four matches this season. Has notched double-digit kills in six-straight matches.
• First player to be named the Pac-12 Offensive Player of the Week since Macey Gardner on Oct. 5, 2015 and just the second weekly honoree since then, as well.
• Earns her first-career weekly honor and the 23rd all-time weekly honor for the Sun Devils.

What does back-to-back matches with 20-plus kills get you? Pac-12 Offensive Player of the Week. 😈

Jenna Ewert, FR, COLO (Antioch, Calif.)
11.5 APS, 2.4 DPS, 1.4 BPS
• Notched back-to-back career-highs in assists with 55 against No. 16 Oregon (3-2) and 60 against Oregon State (3-2).
• Tied a school record with 10 blocks in a match, as only the second CU setter to achieve the feat.
• Only the second player in CU history to have a double-double with assists and blocks, and was just a pair of digs away from becoming the only triple-double recorded without 10 kills.
• Earns second freshman weekly honor this season and the sixth all-time weekly freshman honor for the Buffs.

And your Pac-12 Freshman of the Week, Jenna Ewert! 60 assists against Oregon State, 115 this weekend, 2nd setter in school history with 10 blocks and a double-double with assists and blocks. #GoBuffs pic.twitter.com/HariUkBmOR