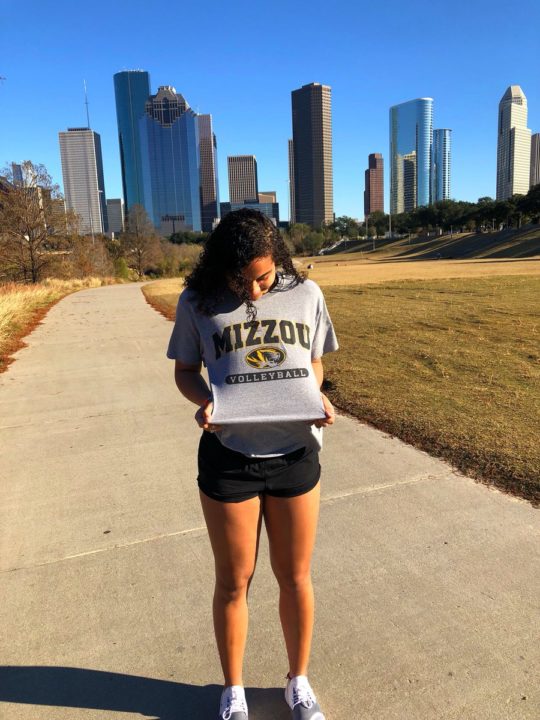 Former high school All-American and Colorado setter Jaden Newsome is transferring to the University of Missouri in 2018. Newsome took a redshirt in 2017 and will be a second-year freshman in 2018.

A 6’0″ setter originally from Houston, Texas, Newsome attended Clear Brook High School where she is the school’s career leader in assists, digs and kills. Her performance earned her a spot on the 2016-17 AVCA Under Armour Honorable Mention All-America list, a spot on the AVCA Phenom List for three straight years (2013-2015) while she was also ranked as the #36 recruit on PrepVolleyball.

An interesting fact about Newsome is that she is left-handed, but plays volleyball as a right-handed player. She was also initially recruited by Missouri among others, but chose Colorado instead.

The Buffaloes, who went 24-10 in 2017 and made the Regional Semifinals, ended up starting Brynna DeLuzio – another freshman setter. That meant a tough road ahead for Newsome, who is now leaving to become a member of the Tigers.

Missouri finished the 2017 season at 22-12 (13-5 SEC), making it to the Sweet 16 for the second consecutive season. They had three setters on their roster last year, with their two assists leaders exhausting their collegiate eligibility.

Very excited to announce that I’ll be attending the University of Missouri this summer to continue my volleyball & academic career!!! #GoTigers ? pic.twitter.com/BMRQZtfdXT