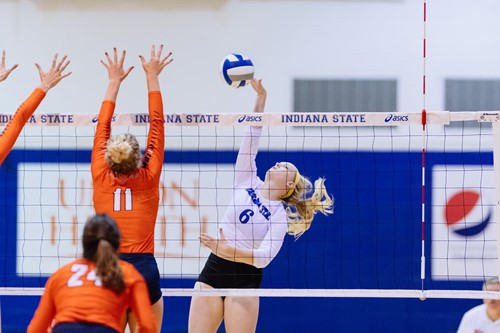 After one season at Indiana State, 6'0" outside hitter Lindsey Wilkins is transferring to Eastern Kentucky. Archive Photo via Indiana State Athletics

After spending one season at Indiana State, 6’0″ outside hitter Lindsey Wilkins is transferring and joining the Eastern Kentucky women’s volleyball program. A sophomore-to-be in the fall, Wilkins will have three years left of play and is set to be immediately eligible.

A native of Lexington, Kentucky, Wilkins will be heading to her home state. She previously prepped at Tates Creek High School where she won three district championships, was all-district and all-city for her performance.

“Lindsey is going to help us fill a really important need over the off-season which is bringing in an outside that has experience at the DI level,” Eastern Kentucky head coach Lori Duncan said in the team’s release of the addition. “She will also help us with some depth in that position. She will be asked right off the bat to step in and play a significant role.”

Wilkins now joins an Eastern Kentucky roster as just the second outside hitter listed on the team as of June 18. The Colonels finished the 2017 season at 13-19 overall and 10-6 as a member of the Ohio Valley Conference before ending their season in the league tournament semifinals.