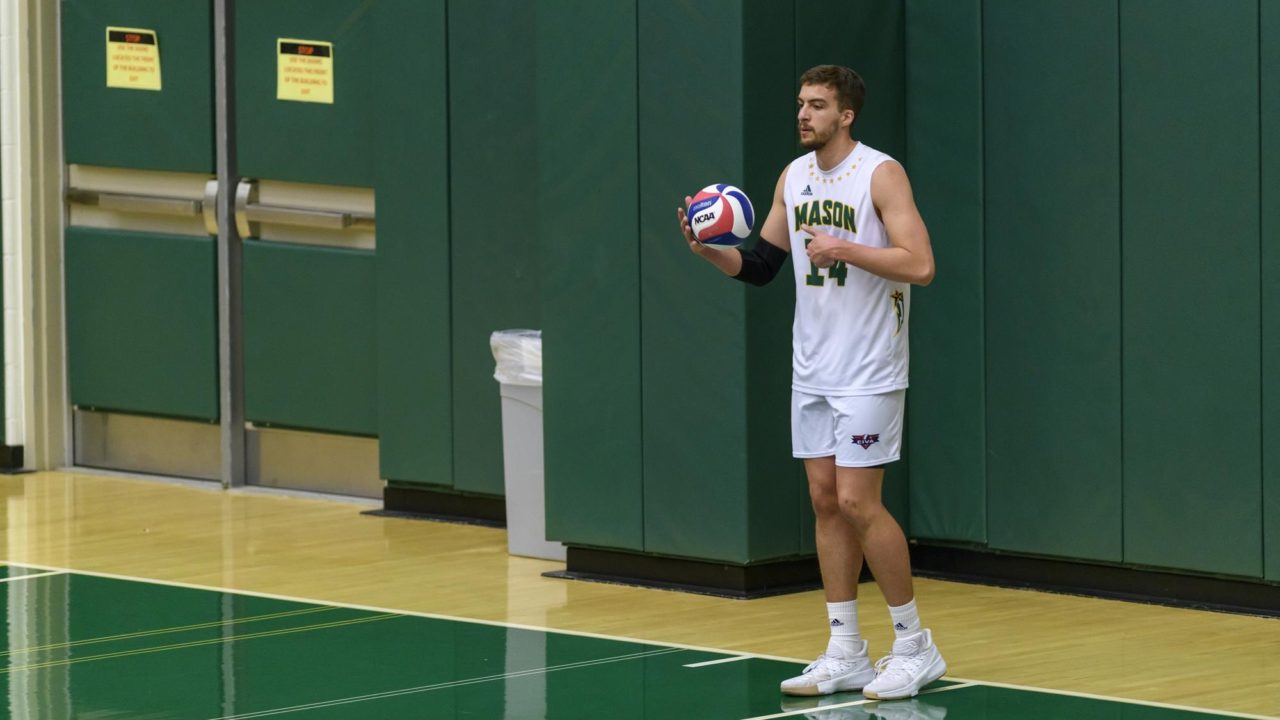 George Mason senior setter Brian Negron made history of his own in the assists column, but it was his 2 aces to end the match that lifted the team to a new height. Current Photo via 0George Mason Athletics

After starting the season 4-10 through a grueling non-conference schedule, the George Mason Patriots have become the first team to clinch a spot in the 4-team EIVA Conference Championship Tournament with their 9th-straight conference win. While we can’t yet call them undisputed conference favorites – they haven’t played 7-2 Harvard yet – they did sweep Penn State 3-0 in the first of the two teams’ regular-season matchups in February to make a strong claim to that sentiment. Winning that tournament would ensure them of a spot in the 7-team field for the 2018 NCAA Championships in May.

The 9-0 start for the Patriots is their best start in conference play in school history, and ties the 2016 season as the longest conference winning streak in program history.

“It wasn’t pretty,” head coach Jay Hosack admitted. “NJIT is a much improved team, and they brought it to us tonight. I am very proud of the fight in our guys. They never give up, no matter what.”

Hayden Wagner had a big hand in the win, marking a career-high 25 kills (9 errors, 44 swings, .364 hitting percentage), combined with 8 digs. That’s his 3rd 20-kill output of the season after 24 early in the year against Mount Olive and 20 in the aforementioned sweep of Pennn State. More importantly, he’s improved his consistency over the last 4 game stretch. In his last 4 games, he’s averaged:

That’s the first time this season that he’s averaged over 3 kills per set, let alone 4, over a 4-game stretch. That included 12 kills in the 3rd set alone. He continued to be boom-or-bust at the service stripe, chipping in 1 ace and 6 service errors.

The 24 George Mason service errors helped keep NJIT in the match, with 5 per set aside from the 2nd, where they only had 4. But, the serve is also what clinched the win: back-to-back Brian Negron aces scored the last two points of the game.

Also in double-digit kills for the Patriots were Kyle Barnes, who had 14 (.206 hitting percentage) and Christian Malias who had 13 (.182 hitting percentage). Barnes and Malias also both chipped in big defensively with 8 and 7 digs each, respectively.

The overall match statistics are a little skewed by NJIT’s early dominance in the first set. There, NJIT hit .500 and held George Mason to -.250 hitting percentage. NJIT hit .342 as a team, and while their hitting didn’t drop off much after that (they still out-hit GMU by 100 points in the 5th, in spite of the GMU win), the Patriots settled in to their offensive rhythm. George Mason hit .377 ignoring the first set.

Brian Negron was a monster at setter, with 52 assists for his 2nd-highest season output. It also jumped him to 3rd place all-time on Mason’s all-time career assists list with 3,469. He also chipped in 5 kills on 6 swings to keep the NJIT defense off-balance (in spite of 9 team blocks).

NJIT’s Alvaro Gimeno had 17 kills and hit .314, while Luca Berger had 10 and only 1 error to finish with a .474 hitting percentage. Berger also had 7 block assists as part of the 9-block to 3.5-block advantage for NJIT. They had 3 in the opening set where they were dominant, but as George Mason figured out the defense later in the game, they became more potent offensively.

While the Patriots can exhale a little with their post-season placement secured, they still have a tough stretch to finish the season. Of their last 5 games, 4 (Princeton, Penn State, Harvard x2) come against the current 3 front-runners to join them in the EIVA tournament. Penn State and Harvard can effectively clinch their tournament spots as well by beating NJIT.