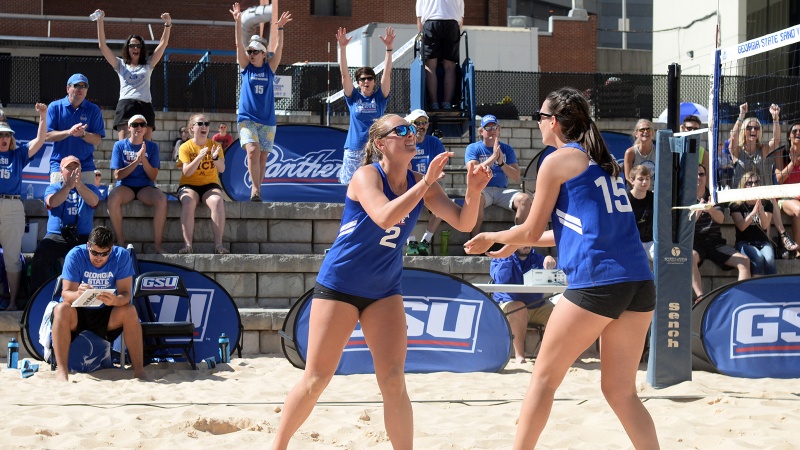 With a 21-9 season playing exclusively in the #1 flight this season, Georgia State’s Delaney Rohan and Chelsea Ross earned this years CCSA Pair of the Year award. In addition, the two were also named to First-Team All-Conference.

Florida State also garnished a top award with Fracesca Goncalves earning the CCSA Freshman of the Year. On the year, Goncalves posted 20 victories, was named CCSA Beach Pair of the Week twice and posted wins for the Seminoles on four different courts.

Courtesy of the CCSA

Following an outstanding season leading Georgia State to another winning season, the No. 1 Panther pairing of Delaney Rohan and Chelsea Ross were voted 2017 Coastal Collegiate Sports Association (CCSA) Pair of the Year as the conference announced its All-Conference awards on Thursday. Florida State’s Francesca Goncalves was named CCSA Freshman of the Year, while LSU Head Coach Russell Brock earned Coach of the Year honors.

Rohan and Ross played all season long in the No. 1 flight and posted an impressive 21-9 record for the Panthers. They went 8-3 against fellow CCSA opponents and had several key victories in 2017. They took down Florida State’s top pair when the Seminoles were ranked No. 4 in the AVCA Polls. They also picked up wins against ranked opponents LSU, South Carolina and Stetson. Delaney Rohan also made Georgia State beach volleyball history over the course of the season as she became the program’s all-time dual wins leader with over 80 in her distinguished career.

Four other CCSA Beach Volleyball pairs joined the Panther duo on the All-Conference team. Florida State’s duo of Brooke Kuhlman and Leigh Andrew were voted to the All-Conference team for the first time. They played 16 matches in the No. 1 position for the Seminoles as they helped Florida State achieve a top-five ranking in the national polls for most of the year. The duo was undefeated against other CCSA foes, while helping Florida State to another 20-win season. LSU’s impressive freshman pairing of Claire Coppola and Kristen Nuss were also honored on the All-Conference squad. They alternated between the top two flights for the Tigers as their play helped LSU move inside the top-10 in the national rankings. The duo is 23-4 overall on the season and have signature wins against six top-10 foes. They went 7-2 against CCSA competition.

Tulane’s Tea Juric made it back-to-back All-Conference honors as she joined the team with freshman Kaylie McHugh at her side this season. They led the team with 25-6 overall record, including 22 wins on court No. 3 and going 3-1 in the top flight. They posted 20 victories in straight sets, and defeated pairs from No. 7 LSU and then No. 8 South Carolina. The final All-Conference pairing came from Florida Atlantic as Jessalyn Kinlaw and Megan Rice were honored. They had a stretch in the middle of the season of 18 consecutive wins, 12 of them coming in straight sets. They picked up four wins against nationally ranked teams, including a signature win against No. 3 UCLA.

Florida State’s Francesca Goncalves was one of the best freshman beach players in the nation this season as she posted 20 victories in her first season with the Seminoles. She was named CCSA Beach Pair of the Week twice, and posted wins on four different courts for FSU. She was joined on the All-Freshman team by LSU’s Claire Coppola, and the South Carolina duo of Ali Denney and Katie Smith. Both players won 19 or more games, with Smith winning 15 of her 19 matches in the No. 1 position for the Gamecocks.

LSU’s Head Coach Russell Brock earned his first CCSA Coach of the Year honor after leading the Tigers to new heights in 2017. The team enters the CCSA Championship as the No. 2 seed with a 22-5 record. After a 2-5 start, LSU has rattled off 20 consecutive wins. They have moved up to No. 7 in the latest AVCA poll, the highest ranking in program history.