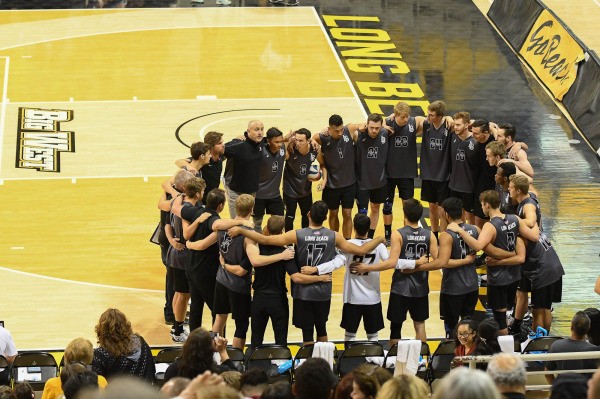 The NCAA Men’s Volleyball is set to begin today, with six teams vying for the top prize of the collegiate season. Ohio State will host this year’s tournament at St. John’s arena, where they will look to defend their national title on their home court.

Below, we’ve made our official predictions for the NCAA tournament, including scores for each game. 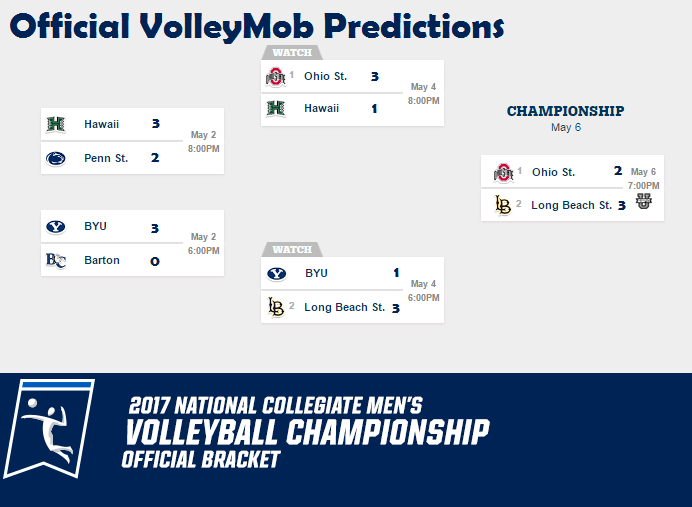 BYU has had a consistent season, holding the #3 spot in the AVCA Coaches’ Poll for most of the year. Out of the teams 25 matches this season, 18 have been to top-15 teams with a 14-4 record facing ranked opponents. The Cougars are led by star opposite hitter, Ben Patch – who dominates at the net each time out on the court, though that time has been limited this season by injury. Barton had a great year, but have not faced any real difficult competition all season, with their only ranked foe being then-#1 Ohio State at the beginning of their season.

BYU will come out on top in the match having more experience against the top teams in the nation.

Hawaii will top Penn State in the opening round through their consistent line-up and have some momentum after a three set sweep over BYU in the semifinals of the MPSF tournament. Penn State is coming off an EIVA Championship, but have not faced the ranked foes that Hawaii has all season in the MPSF. However, the Nittany Lions surprised us all this season with a huge five set victory over then-#1 Ohio State. They have the ability to stick with and beat top opponents, but lack the overall seasonal experience facing them.

Through sheer experience and a high ranking all season, the Warriors will top the Nittany Lions in a tough five set match.

The two teams have faced off twice this season, with the series tied at 1-1. Behind a long list of strong players, Long Beach State will come out on top, not having to rely on one of two players, like BYU but five or six. The 49ers are led by two strong offensive players in TJ DeFalco and Kyle Ensing, with Amir Lugo-Rodriguez dominating on the defensive side of the net with 119 blocks on the year. Only one of these teams comes in to the game with a winning streak (Long Beach State), and BYU actually played better in the regular season match-up without Patch as compared to the one with him.

Having a more dominate front line and defense in the back court, will lead Long Beach State to a 3-1 win over BYU. If the Cougars want an upset, they’ll have to find a way to meld the abilities of the All-American Patch, in what is likely his last season at BYU, with the likes of Jake Langlois, who played so well and developed into a star in his absence. Langlois stepped up to lead the team with 329 kills for an average of 3.83 kills per set this season. That’s been BYU’s challenge in the back-half of the season.

Ohio State has been a dominate force all season, with just two losses. Their offense is led by Nicolas Szerszen and Miles Johnson, with both having over 400 kills on the season. The Buckeyes are rolling off an MIVA Championships and are looking to defend their 2016 national title.

Hawaii will put up a tough fight against the Buckeyes; however, will fall in four sets, allowing Ohio State to advance to the finals.

The finals will go to Long Beach State this season, after a challenging schedule against a number of top teams in the country, they have the resume to finish the season on a high-note.

Both teams are tough competitors, having both been ranked at #1 and #2 all season. The 49ers have the momentum going forward, looking to take their first NCAA Championship since 1991.