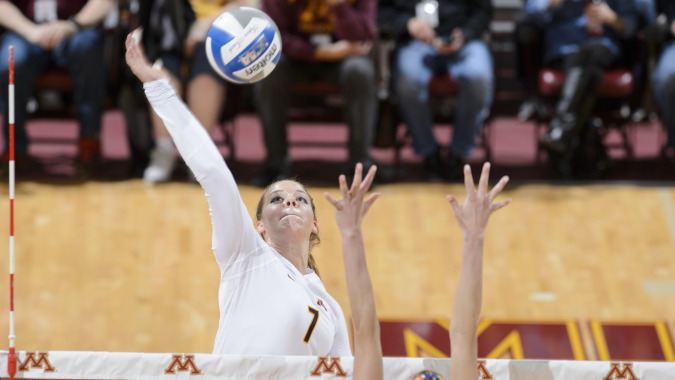 USA Volleyball has called up 4 more players to join its training camp in Anaheim, California as it finalizes preparations... Archive Photo via Minnesota Athletics

USA Volleyball has called up 4 more players to join its training camp in Anaheim, California as it finalizes preparations for the upcoming FINA World Grand Prix, among other summer commitments. The 4 join the 18 players who opened camp on May 1st, with at least 4 more players likely to join the camp after their club commitments wrap up this week.

Bartsch is the most experienced of the group, having been an alternate on the 2016 U.S. Olympic Women’s team at outside hitter. She just finished her pro season with Neruda Volley, resulting in her late arrival to camp.

Similarly, setter Val Nichol and Hannah Tapp come after finishing their pro seasons in Germany. For Tapp, who in the fall was an All-American at the University of Minnesota, this completed her first pro season with SSC Palmberg Schwerin. For both players, this is their first time in a senior USA Volleyball National Team training camp.

The 4th addition is Justine Wong-Orantes, who becomes the 3rd libero on the roster joining Morgan Heise and Amanda Benson. Wong-Orantes just finished her beach, and academic, year at the University of Nebraska, and was regarded as the best collegiate libero in the country last season.

In addition, 4 Americans that will begin play this week at the FIVB Club World Championships in Japan are likely to join the camp later in the month. That includes Jordan Larson and Rachael Adams with Turkish side Eczacibasi, Kim Hill with Turkish side Vakifbank, and Foluke Akinradewo in her last tournament with Switzerland’s Volero Zurich.

Updated Roster, as of May 8th.