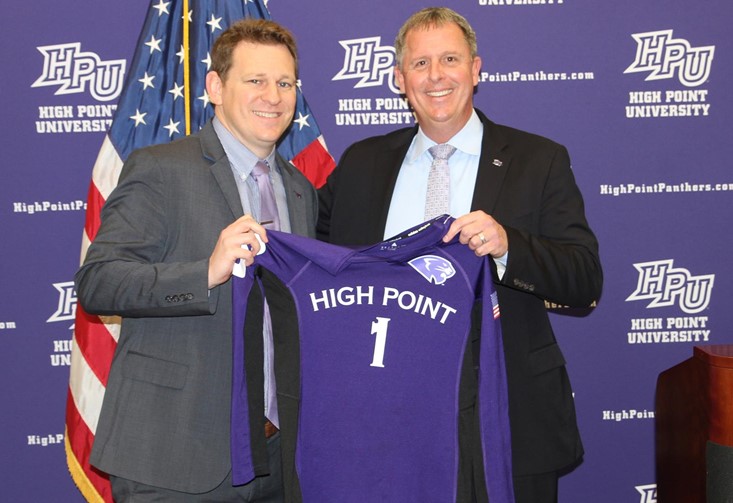 High Point University in High Point, North Carolina has announced Ryan Meek as the 12th head coach in program history, and 5th since the team moved to Division I in the 1999-2000 season. Meek comes from Creighton, where he spent the last 2 seasons as assistant coach and recruiting coordinator.

Meek takes over after a historic season where High Point, who lost to 2nd-seeded Radford in the Big South Conference championship game, received an at-large bid to the NCAA tournament. In the process, they became the Big South’s first-ever at-large bid to the NCAA Tournament, meaning it was the first time the conference sent multiple teams to the dance. That success earned head coach Tom Mendoza a jump to South Carolina in the SEC, and opened up this position for Meek.

In Meek’s 2 seasons at Creighton, the team was frequently ranked in the top 10 and earned their first trip to the Regional finals (Elite 8) in 2016. In 2017, Creighton lost to 12th-seeded Michigan State in the 2nd round of the tournament, but had an early-season win against then-#4 Kansas which is the highest win in school history (though, early season expectations of Kansas wouldn’t hold up later in the year).

Prior to his time at Creighton, Meek spent 5 seasons as the head coach at Division III Hendrix College, where he had a 110-64 record. He also has stops as an assistant at Missouri State (2 seasons) and a brief stint as interim head coach, and as a volunteer assistant at Arkansas (1 season).

“We’re thrilled for Ryan and we’re thrilled for High Point,” his former boss Kirsten Bernthal Booth at Crieghton said. “Ryan is someone that’s going to work his tail off to be great and I know he’s really excited about all that High Point has to offer. I have no doubt he’s going to continue to move what is already a very successful program to new heights.”

High Point returns 12 out of 16 members of its 24-8 team from 2017. Among the graduates are their leading hitter Haley Barnes (3.21 kills/set) and one of the two setters in their 6-2 offense, Carly Jimenez. Creighton ran a 5-1 offense, though Hendrix College employed a 6-2 during Meek’s run as head coach there.