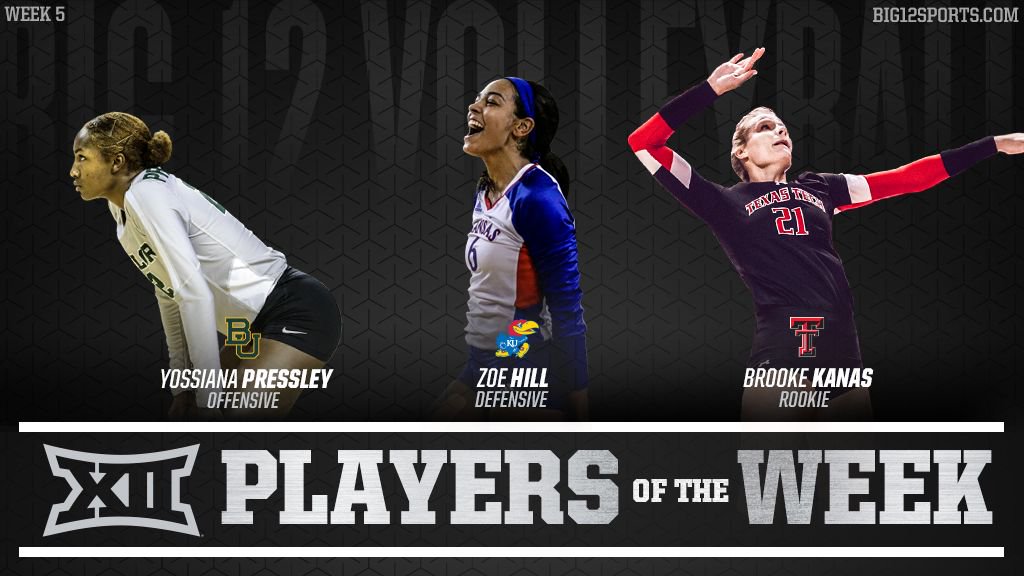 Pressley earned her 11th career weekly honor and second of 2018 with the Offensive Player of the Week nod. The sophomore outside hitter averaged 6.11 kills and 2.67 digs per set, while hitting at a .301 clip. The Cypress, Texas, native tallied a 16-kill, 11-dig double-double while hitting .179 against Texas Tech on Wednesday. Pressley then posted a school-record and career-high 39 kills and 13 digs, while hitting .390 at Iowa State on Saturday. She became the first Bear since 2001 to put down more than 35 kills in a match, and fell just one putaway shy of the Big 12 record set in 1997.

Congrats to the #Big12VB Offensive Player of the Week, Yossiana Pressley! #SicEm

Hill piled up 16 blocks in the Jayhawks’ wins over Drake and TCU last week, while also adding 19 kills on a .302 hitting effort. Against the Bulldogs, the junior middle blocker notched 11 kills and seven blocks, while hitting at a .550 clip. In the team’s Big 12 opener against the Horned Frogs, the Houston, Texas, native managed eight kills and a season-high nine blocks. For the week, she averaged 2.38 kills and 2.00 blocks per set. Hill was last honored by the Big 12 as Offensive Player of the Week on Oct. 19, 2017.

Kanas notched two double-digit kill efforts and six blocks, while hitting at a .356 clip. The New Braunfels, Texas native averaged 3.88 kills per set for the week in four-set wins over #12 Baylor and West Virginia. Against the Bears, Kanas posted a season-best 17 kills and added four blocks and two digs, while hitting .344. Against the Mountaineers, the outside hitter downed 14 kills at a .370 clip and added two blocks and two digs. Kanas is the first Texas Tech player to receive a Big 12 weekly award since 2014.

With her breakout performance in Week 1 of league play, freshman Brooke Kanas was named Big 12 Rookie of the Week!