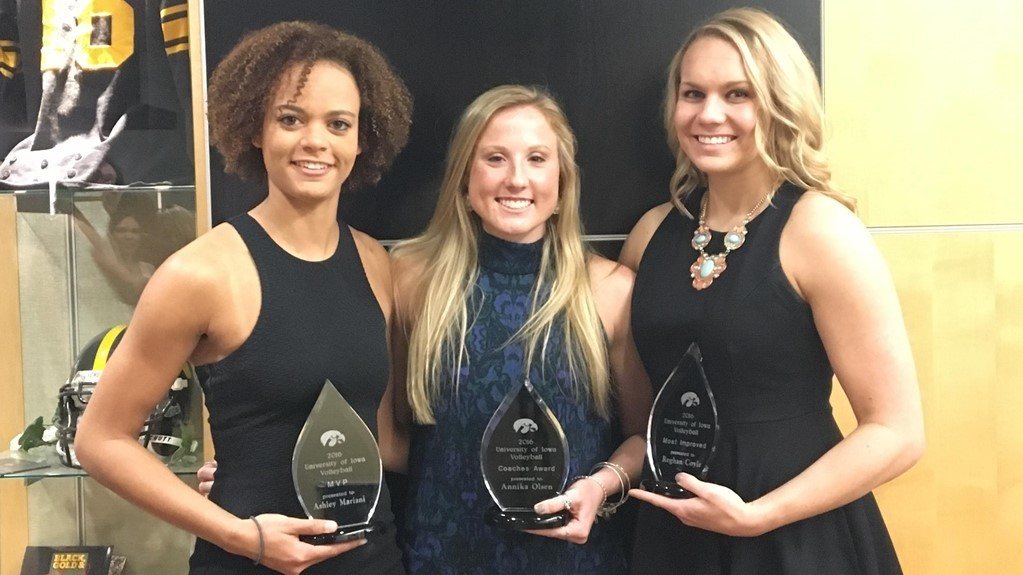 The 2016 University of Iowa volleyball team held its annual post-season banquet on Sunday night where head coach Bond Shymansky announced the season’s award winners. Ashley Mariani was voted the team’s Most Valuable Player, Annika Olsen received the Coaches Award and Reghan Coyle was selected as the Most Improved Player.

Shymansky shared several 2016 team accomplishments, thanked the student-athletes and staff for their individual roles in the squad’s success and presented the awards.

Mariani, who was selected by her teammates as the squad’s MVP, was one of five players to appear in all 110 sets. The senior amassed 221 kills, a .291 attacking percentage and 71 blocks over the season.

Mariani concluded her career with a .250 overall attacking percentage to rank No. 6 in program history. Over her two years in the Black & Gold, she tallied 442 kills on 1,112 total attempts.

From Oct. 21 to Oct. 29, Olsen recorded four matches with 20-or-more digs. In addition to her season-best 25 digs against the Golden Gophers and 22 against the Badgers, Olsen chipped in 21 digs in Iowa’s win over Northwestern (Oct. 28) and 22 in the Hawkeye victory over No. 24 Illinois (Oct. 29). Overall, the junior had six matches with 20-or-more digs.

During the season-finale against Michigan State, Olsen racked up her 1,000th career dig. The junior finished the season with 1,001 digs to rank 16th in program history.

Coyle was voted the team’s most improved player by her teammates after a solid sophomore season. In 32 contests this season, she more than doubled her kills total from last season. The Council Bluffs, Iowa, native registered 239 kills. This comes after a 2015 season where she recorded 68 kills in 23 matches.

After a career-high 14 kills against Northwestern on Oct. 28, Coyle amassed a new personal-best the next night as she went off for 18 kills against No. 24 Illinois. These kills helped the Hawkeyes defeat Illinois for the first time since 2005. For these performances, Coyle became the first Hawkeye since 2012 to earn Big Ten Player of the Week honors.