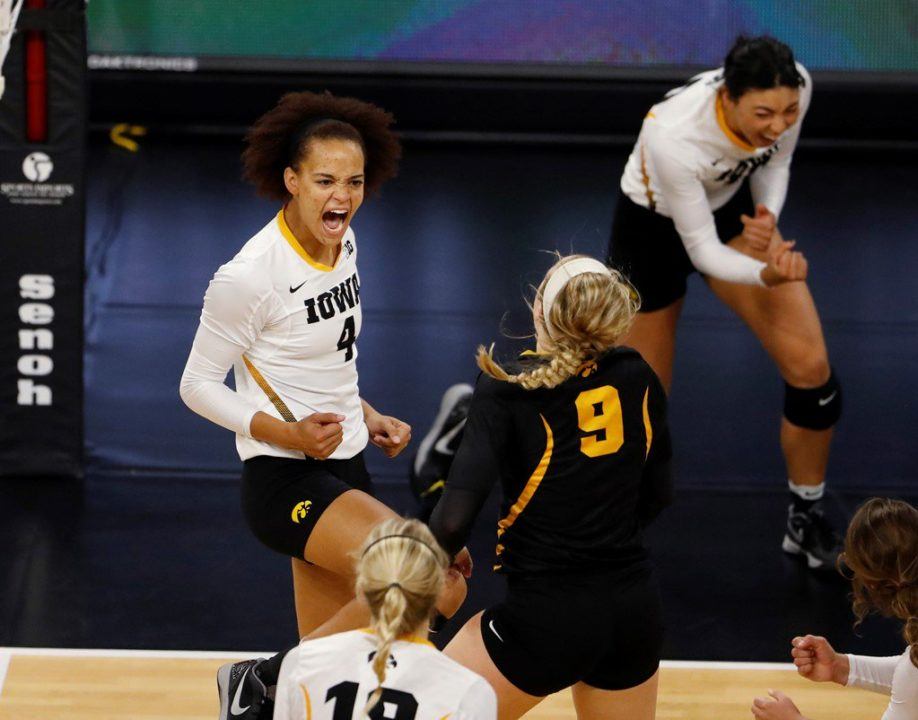 The Hawkeyes grabbed their first Big Ten conference win of the season with a straight set sweep over Maryland. Jess Janota led the way for the Hawks with 12 kills, two blocks and an ace. Ashley Mariani hit for .588 with 10 kills and four blocks. Right side Reghan Coyle put down seven kills and three blocks for Iowa.

The Terps are on a long road streak, with the loss to Iowa being their 12th in a row away from home. Gia Milana recorded 12 kills for the Terps, While Angel Gaskin and Ashlyn MacGregor added four blocks a piece.

Maryland will host a rematch against the Hawks on Oct. 14 at 6pm.

IOWA CITY, Iowa — The University of Iowa volleyball team notched it first Big Ten victory of the season with a 3-0 sweep over Maryland on Wednesday evening in Carver-Hawkeye Arena. The Hawkeyes improved to 11-4 on the season and 1-2 in Big Ten action with the victory.

“Being able to get a Big Ten win at this point in the season is significant for us,” said UI head coach Bond Shymansky. “A win is a win in Big Ten play. You take any Big Ten win that you can get, but we know that we still have tons of work to do.

“I’m proud of the group for the investment they keep putting in each other, and for their true mental toughness. It’s really been fantastic to watch this group get better and better. It’s really no surprise that we got a Big Ten win this early in the season, and we are going to get more.”

The Hawkeyes got out to an early 7-4 lead in set one, before the Terrapins clawed their way back to tie the set, 9-9. Maryland used a 5-1 run to establish a lead and ultimately force Iowa to call a timeout. The Hawkeyes responded, using a 12-3 run to win the set, 25-22. Senior Ashley Mariani and sophomore Reghan Coyle led the Iowa rally. The duo combined for back-to-back blocks and three kills, while redshirt freshman Meghan Buzzerio added an ace. Junior Jess Janota paced the offense in the set, recording five kills, and Mariani registered three blocks to give the Hawkeyes a 1-0 lead in the match.

Iowa never trailed in set two, utilizing a 5-0 run to grab a lead and never looking back. Junior setter Loxley Keala served the rally and added an ace, senior Lauren Brobst and Reghan Coyle registered kills, and Janota and Coyle combined for a block. The Hawkeyes never looked back from there, holding off a late Maryland rally to win the set, 25-21.

The Hawkeyes used a .421 attack percentage to overwhelm the Terrapins in set three. Iowa started the set with a 7-1 swing behind kills from Coyle (2) and Mariani (1). They remained in control from there, taking advantage of four Maryland errors and two Mariani kills down the stretch to win the set, 25-16, and the match, 3-0.

Keala recorded her first double-double of the season for the Hawkeyes with 32 assists and 10 digs. Janota (12) and Mariani (10) combined for 22 of Iowa’s 38 kills. Mariani was the most efficient, hitting .588 with 10 kills in 17 attempts and no errors. Junior libero Annika Olsen registered 10 digs, while Mariani (4), Coyle (3), Buzzerio (2), and Janota (2) recorded at least two blocks apiece.

The Hawkeyes return to action Saturday, traveling to Evanston, Illinois, for a match against the Wildcats. First serve is set for 7 p.m. (CT).

“This was our 12th straight road match, and we played poorly tonight,” head coach Steve Aird said. “Credit to Iowa, they did some good things. There are lots of lessons that this team still needs to learn. Our staff needs to do a better job of preparing the team. This conference is unforgiving, and our youngsters need to learn, grow and get tougher.”

The teams played closely in set one as there were eight ties and two lead changes. Iowa took an early 6-3 lead before two straight Terp blocks tied the set, 8-8. Maryland put together a 4-0 run to take a 13-10 lead. Milana notched two kills as the Terrapins continued to stay ahead, 16-13, and the Hawkeyes called timeout with the Terps leading 18-14. Iowa pushed forward to tie the set, 20-20, and took the lead 23-22. The Hawkeyes notched the last two points to win the set, 25-22.

Iowa started the second set on a 5-0 run. A solo block from Hailey Murray and a kill from Milana pulled the Terps within two, 7-5. Iowa was able to take advantage of Maryland’s errors to take a 12-5 lead. MacGregor tallied two straight kills to pull within five, 15-10, but the Hawkeyes pushed ahead to a 19-13 lead. The Terps went on a 3-0 run to pull within four, 21-18, but Iowa reached set point at 24-19. Milana hit two kills to extend the set, but the Hawkeyes closed it, 25-21.

Iowa again started hot in the third, taking a 7-1 lead. Megan McTigue checked in and served as ace, and the Terps went on a three-point run to pull within four, 13-9. Gaskin and Liz Twilley posted kills, but the Hawkeyes continued to score, reaching a 19-11 lead. Nell Drummey notched a service ace, but Iowa used a 4-1 run to win the set, 25-16.

The Terps host Iowa in a rematch on Friday, Oct. 14 at 6 p.m. The squads will compete before the Maryland basketball teams host Maryland Madness.