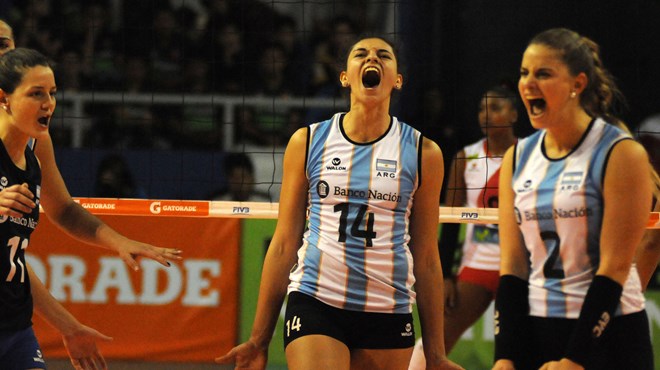 Iowa State 6’1″ sophomore Candelaria Herrera is listed on the Cyclones’ roster as an outside hitter and opposite. As a result of injuries, including one to Avery Rhodes, who hasn’t played since the Nebraska match, though, she’s been called into duty in a different position – middle blocker. Rhodes’ first substitute was Meegan Hart, who also went down with injury after 11 blocks and 15 kills in just 9 sets played.

While Iowa State had planned to convert her to a hitter, at Florida A&M last year as a freshman, Herrera played middle blocker, where she averaged 2.69 kills/set, hit .354, and averaged .89 blocks/set. For her efforts, she was named the MEAC Rookie of the Year.

It’s been like riding a bicycle as she’s filled in at this position over the last week-plus, including in Sunday’s 3-2 loss to Syracuse (a match that Iowa State controlled through 2 sets before Syracuse battled back to win). She finished the match with 9 kills and 9 blocks while hitting .389. The latter two of those statistics were team leaders for Iowa State.

Herrera, a native of Argentina, played mostly a hybrid middle-hitter role for Argentina when she played at the 2015 U18 World Championships, which is similar to how Iowa State has been using her as well.

Iowa State’s depth in the middle has allowed them to survive through the injuries, though the Cyclones are now 0-2 since Hart’s injury. Her last match was a 3-0 win over Wyoming, but Iowa State then lost to Iowa 3-1 and Syracuse 3-2 on Friday and Sunday, respectively. Herrera had just 4 kills, 2 blocks, and hit just .167 against Iowa.