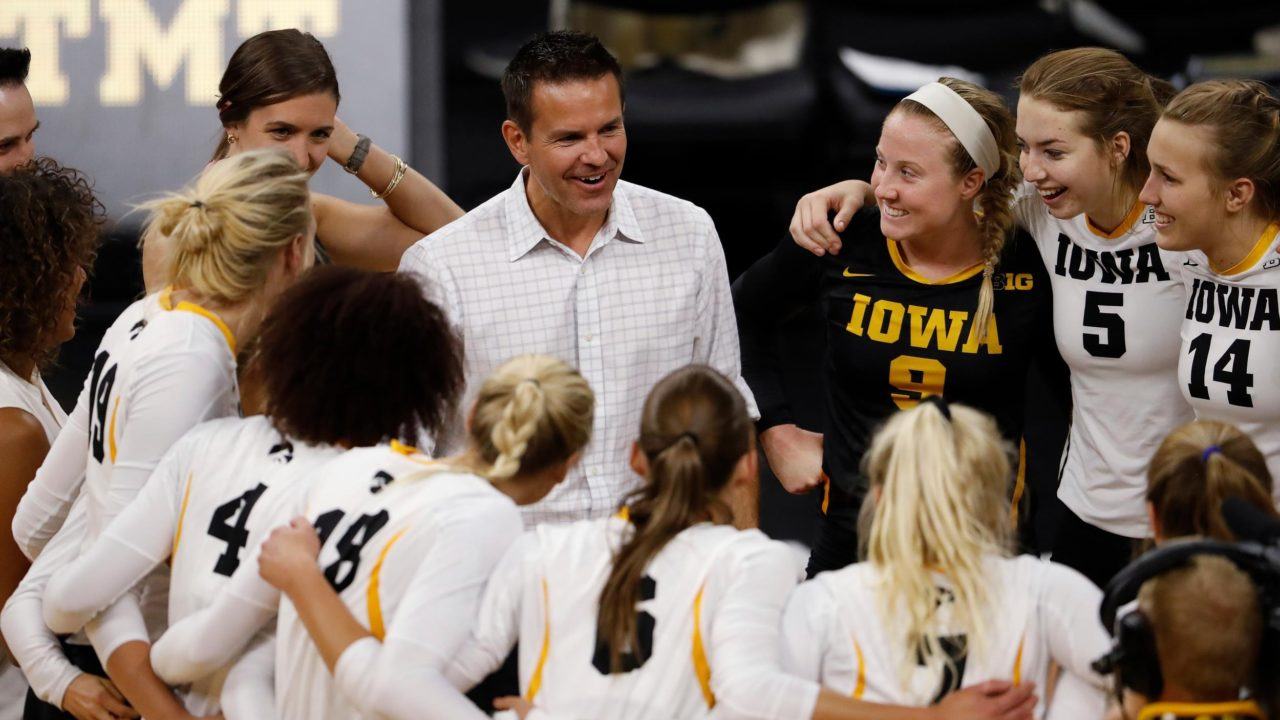 The University of Iowa volleyball team defeated Coastal Carolina, 3-0, in its second match of the Hawkeye Classic on Friday night in Carver-Hawkeye Arena. Current Photo via Iowa Athletics

The University of Iowa volleyball team defeated Coastal Carolina, 3-0, in its second match of the Hawkeye Classic on Friday night in Carver-Hawkeye Arena.

FIGHT FOR IOWA
Taylor Louis led the Hawkeyes, tying a career-high 16 kills and registering a .519 attacking percentage. She has had double-digit kills and has amassed over a .300 attack percentage three times this season.

HOW IT HAPPENED
Set 1 (25-20) | Iowa had a dominant first set, jumping ahead early and using a 13-4 run to extend the advantage. Down 20-11, the Chanticleers attempted a comeback, but the Hawkeyes shut them down to take a 1-0 set victory.

Set 3 (25-18) | With the set tied at 9-9, the Hawkeyes used a 10-3 stretch to take the lead before securing the match sweep. Louis had six kills in the set, while Reghan Coyle chipped in five.

HEAR FROM COACH SHYMANSKY
“We need to be smart and steady with the ball. You can’t miss Taylor Louis out there, she’s just terminating the ball and has an unbelievable attack percentage, but we are not relying on her solely. I thought the offensive spread was really good by our setter Brie Orr. We’re getting a lot of balance offensively out of our group. We want to see the intensity out of the middles, rights, and the lefts, so what I told the group is that we need to separate from the other team right at the beginning with our effort. Our girls and libero are getting sweat on the floor, just diving everywhere and that becomes contagious. We needed to set the tone early and then maintain that intensity.”

UP NEXT
The Hawkeyes face Coastal Carolina in their third match of the Hawkeye Classic on Saturday afternoon at 2 p.m. (CT) in Carver-Hawkeye Arena.

The Coastal Carolina volleyball team fell in three sets (25-20, 25-23, 25-18) at Iowa Friday night in its second match of the Hawkeye Classic. The Chants previously defeated Indiana State in a three-set match Friday morning to even their weekend record to 1-1.

The loss also evens Coastal’s season record to 2-2, with a second match against Iowa — and the Chants’ final match of the Hawkeye Classic — upcoming on Saturday at 2 p.m. CT (3 p.m. ET).

Iowa hit .282 to Coastal’s .138, while also holding advantages in kills, digs and blocks.

Iowa’s Taylor Louis led all players hitting .519 while putting down 16 kills, the only Hawkeye to reach double figures in the category.

The Chants likewise had just one player with double-digit kills as Leah Hardeman finished with 16. Kate Federico added a double-double with 12 assists and a team-leading 13 digs.

Coastal led just once in the opening set as Hardeman landed a kill and a pair of aces to put the Chants in front, 3-1, in the early going. Iowa quickly regained the lead and pulled ahead by as many nine points in the set, leading 20-11. A 6-2 Coastal run trimmed the Chants’ deficit to five points, but they would pull no closer as Iowa closed the set with a five point advantage.

Iowa led 16-9 in the second before Coastal responded with seven straight points to even the set. The rally started with a Hawkeye service error, and Kaylah House led the charge with a trio of kills. The set was tied four more times before Coastal gained a 22-20 advantage on an Iowa error and kill from Dora Lulic. Two consecutive kills and a block shifted the lead back to Iowa, and the Hawkeyes closed the set with kills from Louis and Jess Janota.

A 12-5 Iowa run proved to be the difference-maker in the third and final set. The frame was deadlocked at nine points apiece before the Hawkeyes used the run to power ahead, 21-14, and force Coastal into a timeout. Coming out of the break, Coastal fought back to pull within five points, but could not overcome Iowa’s sizeable lead.