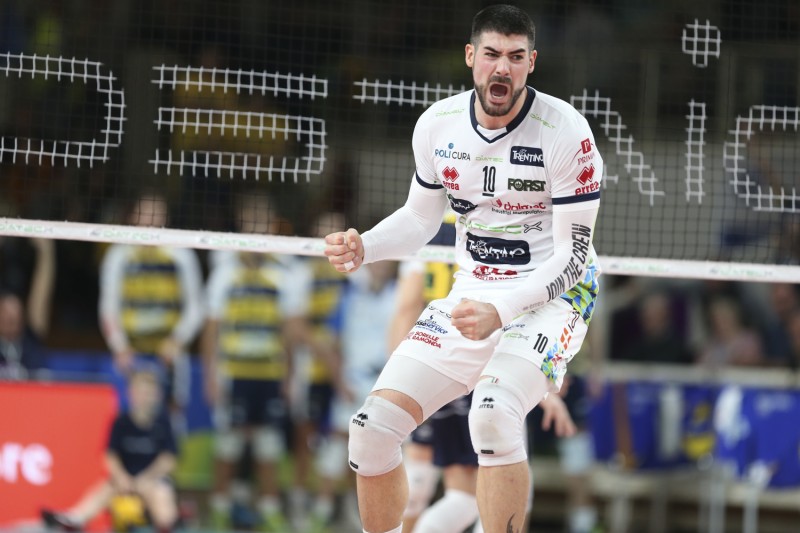 The big matchup of the week was Diatec Trentino and Azimut Modena - which did not disappoint. Trentino pulled the match out with a five-set win, making the comeback over a strong Modena squad. Current Photo via legavolley.it

The big matchup of the week was Diatec Trentino and Azimut Modena – which did not disappoint. Trentino pulled the match out with a five-set win, making the comeback over a strong Modena squad.

This week was big for Modena’s coach as he was making his first comeback into the PalaTrento facility since leaving Trentino concluding last season. Unfortunately, he was unable to take down his former team on the road.

Diatec Trentino had a well-balanced offense as they took down Azimut Modena in a tough five-set battle. Nicholas Hoag led the way with 19 points while four other Trentino players recorded double-digit points – Filippo Lanza (15), Aidan Zingel (12), Renee Teppan (11) and  Eder Carbonera (10). For Modena, both Earvin Ngapeth and Giulio Sabbi posted 21 points while Tine Urnaut made his comeback to the court after missing matches due to an injury by recording 12 points in the loss.

Revivre Milano downed Kioene Padova in straight sets behind a solid performance from Nimir Abdel-Aziz, who put down 19 points in the match, including five aces.

Aleksandar Atanasijevic led the way for Sir Safety Conad Perugia in their sweep over BCC Castellana Grotte, with a match-best 21 points. No players for Castellana recorded double-digit points.