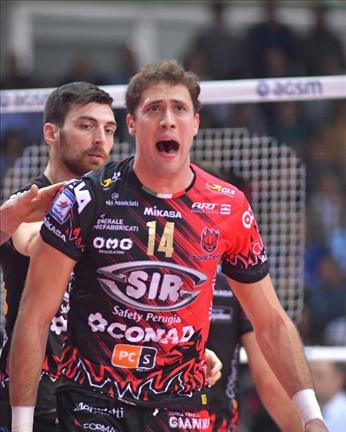 The second week of the Italian Men's Superleague play has concluded with Sir Safety Conad Perugia and Azimut Modena sitting at the top of the rankings with six points after sweeping both of their opponents. Current Photo via LegaVolley.it

The second week of the Italian Men’s Superleague play has concluded with Sir Safety Conad Perugia and Azimut Modena sitting at the top of the rankings with six points after sweeping both of their opponents.

Cucine Lube Civitanova and Bunge Ravenna were unable to compete in their match due to an unforeseen illness from a fan that required immediate rescue and resuscitation maneuvers – the fan later had been reported to have died. The match was postponed due to the incident, not allowing the two squads to compete in their regularly scheduled meeting. The match has been rescheduled for November 22.

For Sir Safety, Aleksander Atanasijevic was named the MVP of the match for his strong performance against Calzedonia Verona that included 17 points in front of a crowd of 4,435 fans. Coming from another unbeaten squad so far, Filippo Lanza led Diatec Trentino to a four-set squabble over Kioene Padova with 20 points.

Azimut Modena rolled to their second straight sweep in the league behind a strong setting performance from Bruno Rezende who led the team late to victory over Biosi Indexa Sora.

The competition switches up its usual Sunday matches with a mid-week showing on Wednesday evening and Thursday matches. See the Wednesday matches below: