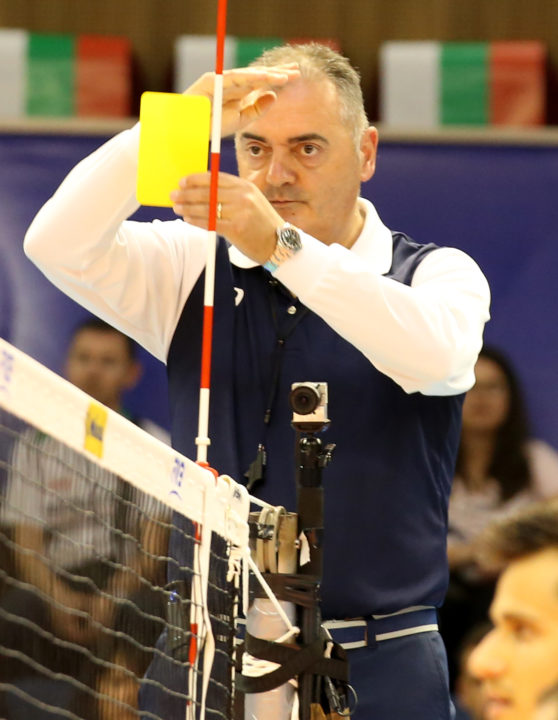 Rather than the traditional yellow (above) and red cards for unsportsmanlike play, the green card will be given for fair play. Archive Photo via FIVB

Borrowing an idea from their compatriots in the lower levels of Italian soccer, the Italian men’s volleyball league will institute a system of “green cards” for fair play in the 2018-2019 season.

Previously used extensively in youth and lower (Serie B) levels of the Italian soccer system, the card will be awarded by referees when they see athletes make a fair play. Its color and use is in opposition to yellow and red cards, used in both soccer and volleyball among other sports, to indicate a violation of rules of decorum or safety within a game.

Examples given for situations where green cards are given would be if a player were to admit to touching a ball on the block without requiring the referee to go to the replay monitor.

According to Lega Pallavolo CEO Massimo Righi, there are two purposes to the new green card: to bring more fairness and sportsmanship to the game; and to speed up games.

“The inclusion of this rule will bring several benefits,” Righi said. “We will try to enhance fairness, and to shorten matches. The objectives are therefore twofold: to increase fair play and restore the value chain, re-aligning the values ​​of volleyball with the behavior of the players, and shorten the dead times of the games.”

The cards within a game will not have any direct benefit, but the league will use them as a way to market and promote teams that exhibit fair play. At the end of the season, the league will add up the green cards for each team in the league, and the team that accrued the most will be given a sum of money to donate to charity.

When soccer announced the addition of green cards to Serie B in 2015, officials were more blunt in their description of the reasons: “to highlight those who help to make the game a game and not a battle by primal instincts.”