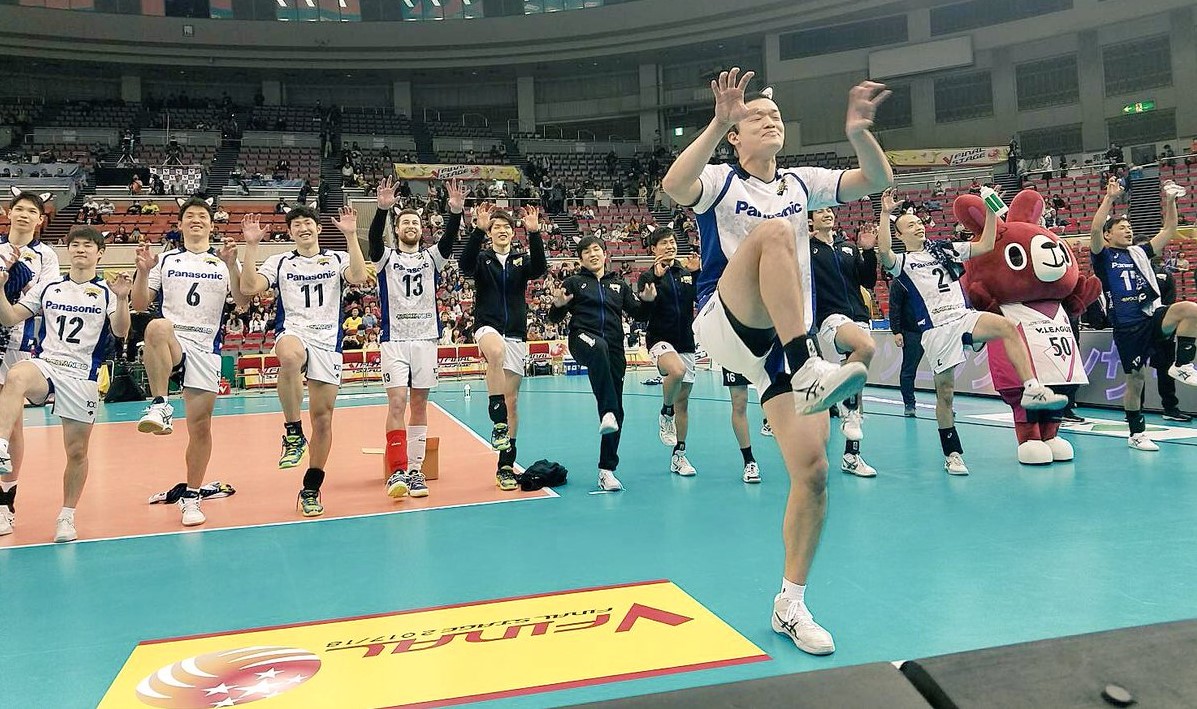 The first match of the two match series forthe Japanese Men’s V.League Final between the Panasonic Panthers and Toyoda Gosei Trefuerza had two really big holes in the plot line before the final even began. Panasonic’s Kunihiro Shimizu was lost for a year due to a knee injury and Toyoda’s Igor Omrcen severe strained his achilles in the Final 3 (Semifinal) against JT Thunders on Sunday the 4th. How would both teams deal with these player losses in the Final?

Nagoya’s Nippon Gaishi Hall was the venue for Match 1 in front of a crowd of 5,920. In the first set, it was tied at 2, before Akihiro Yamauchi went to the service line for the Panthers, a 6-0 run followed which included an ace and two blocks. Panasonic with a 8-2 lead into the first TTO. The Trefuerza tried to keep pace, but after a block made it 16-9 Panthers at the second TTO, it looked like the Panthers could coast to the set win. Panasonic ended the set 25-19 off Michal Kubiak spike from the back row, 1-0 set lead to the Panthers.

The second set was much closer at the first TTO with a 8-6 lead for the Panthers from a Tatsuya Fukuzawa back row spike off the block out of bounds. Coming out of the TTO Hideomi Fukatsu had a solo block against Toyoda’s Takuya Takamatsu to give the Panthers a 4-0 run and 9-6 lead. Toyota fought back to keep the score between 1 and 2 points for the Panthers. A spike by Takahiko Imamura for Panasonic gave them a 16-14 lead at the second TTO. Out of the TTO, another Fukuzawa spike and a Panthers block put the up four at 18-14 and forced a Trefuerza time out. Toyota worked the lead back down to two at 18-20, and had a chance to make it one, but Takamatsu hit wide for 21-18 Panthers. Kubiak followed that up immediately with a deep cross court kill from the left front to give Panasonic the gap to win the set 25-21, 2-0 set lead Panthers.

The third set started ominously for the Trefuerza with a Panthers stuff block, but both teams exchanged three-point runs by the first TTO, Panthers up 8-7. A service ace Kenji Shirasawa, followed by a Yamauchi spike made it a 5-0 run for Panasonic now up 10-7. Even time Toyota would get to a chance to make it a one-point set, Panasonic would score. At the second TTO, Panasonic had a 16-13 lead. Two stuff blocks in a row by Toyoda’s Shuzo Yamada made it 18-17 Panthers, and Panasonic used a time out to hopefully stop the run. An overset by the libero for Toyoda gave Panasonic a point to stop the run at 19-17. But Toyota blocked a Kubiak spike to tie the set at 19. Taichi Kawaguchi had a chance for Toyota to take a lead with a spike but hit the ball out to give Panasonic 20-19 lead. A Yamauchi solo block gave the Panthers two-point lead 21-19. Another Toyoda spike out and two spectacular Panthers quick rebound spikes pushed the lead to five and a Yamauchi spike ended the set 25-20 and the match 3-0 Panasonic.

The Panthers dominated at the net with both spikes and blocks. Panasonic had 14 blocks compared to Toyoda’s five. Panasonic also had 7 more kills than Toyoda. Without their leading scorer Igor Omrcen, Toyoda needed more from others and did not get it today.

Kubiak (12k, 2b) and Fukuzawa (13k, 1b) for Panasonic led all scorers in the match. Takuya Takamatsu for Toyda was their leading scorer with 13. Yamauchi for Panasonic today may have had his best match ever 9 kills on 9 swings, plus a block and an ace for 11 points. Shirasawa (4), Imamura (3) and Fukatsu (3) combined for 10 of Panasonic’s 14 blocks. Ryosuke Tsubakiyama as Omrcen’s replacement had 10 kills on 25 swings for the Trefuerza in the loss.

Toyoda will need to win on Sunday March 18th in the second match of the Final to force a “Golden Set.” However with Panasonic playing this well, I don’t know if they can overcome Omrcen’s injury. Also, we still don’t know if Omrcen can even play, and he was not listed on the roster for today’s match.