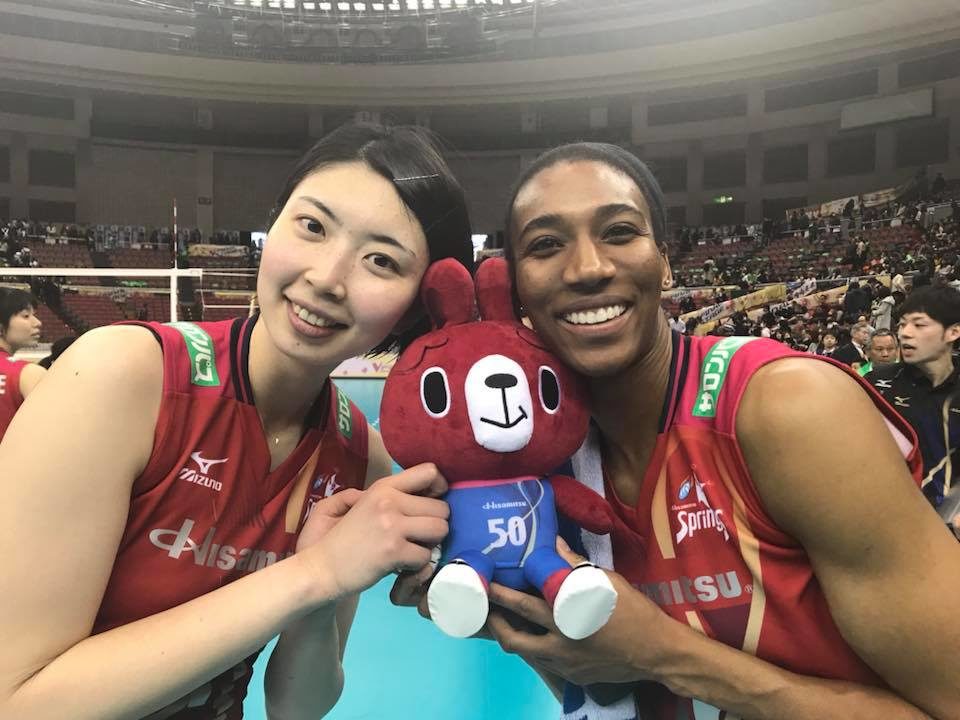 Match 1 of the two match Japanese Women’s V.League Finals between the JT Marvelous and Hisamitsu is a match up... Current Photo via Hisamitsu Springs

Match 1 of the two match Japanese Women’s V.League Finals between the JT Marvelous and Hisamitsu is a match up of the two best teams in the league all season. Hisamitsu were a perfect 21-0 in the regular season, with JT finishing second at 13-8. However, the Marvelous went 5-0 in the Final 6, including a 3-0 sweep of the Springs, ending Hisamitsu’s chance at a perfect season.The win over Hisamitsu allowed the Marvelous to go directly to the Final. While Hisamitsu dominated the Toyota Auto Body Queenseis in the Final 3 (Semifinal), winning the series 2-0, each in a 3-0 sweep.

The big question for the day is whether the Marvelous could score as a team to compete with the very balanced Springs offense. JT has been very dependent on Brankica Mihajlovic, while the Springs have Risa Shinnabe, Yuki Ishii, Rika Nomoto, Nana Iwasaka and Foluke Akinradewo for their attack.

Nagoya’s Nippon Gaishi Hall hosted the first match of the Final in front of crowd of 5,150 people. In the first set, it was a complete and utter slaughter by the Springs 25-9. After the Marvelous scored the first point of the match, Hisamitsu went on a 4-0 run, which prompted JT to take a timeout at 4-1. Both teams exchanged he next three points. Akinradewo went to the service line at 6-3 and served an ace to make it 7-3. A Iwasawa block made it 8-3 at the first TTO. Coming out the timeout, Hisamitsu scored two more points to make it 10-3 and the Marvelous took their last timeout of the set. After the time out Akinradewo served another ace to make it 11-3. A Mihajlovic spike ended the 5-0 run. Hisamitsu kept the pressure on, with another 5-1 run to reach the second TTO up 16-5. The Springs did not let up and even pushed the lead to 16. The nine points by JT were tied for the fewest points in set against Hisamitsu all season. NEC Red Rockets also had nine points in a set in the first match of the season.

Moving onto the second set, the Marvelous had to at least show some fight or the match would be over quickly.  Hisamitsu jumped out to a quick lead, but JT caught up at 5-5. Consecutive blocks by Iwasaka gave the Springs a 8-5 lead at the first TTO. After the timeout the Springs would push the lead to four at 9-5 causing a JT timeout. JT did get within two points a couple of times, but they could not get closer and 5-2 run by the Springs ended to set 25-20, 2-0 Hisamitsu set lead.

If the third set was a formality for the Springs, Hisamitsu would be a heavy favorite to win. The Marvelous needed a set win to stay alive in Saturday’s match. Otherwise they would have to win the second match of the series next week. A Mihajlovic spike gave the Marvelous a 8-7 lead at the first TTO. At 13 all, JT got two spikes in a row for kills, the last being a Mihaljovic spike off her own dig in the back row, which landed on the back line for 15-13 JT lead. JT kept the lead at 16-14 at the second TTO. An overset by the Springs led to a quick kill for the Marvelous giving them a three-point lead at 17-14 and Hisamitsu took a timeout. However, all of JT’s momentum was lost after the timeout with three straight points by the Springs to tie at 17, which caused the Marvelous to take a timeout. Nomoto killed consecutively for the Springs to take a two-point lead at 19-17. Ishii used two off-speed shots to push the lead to four at 23-19. Ishii used one more spike to end the set 25-21 and the match 3-0 to Hisamitsu.

Looking at the team statistics, it was all Hisamitsu, +11 kills, -6 hitting errors and +6 blocks. Yuki Ishii of Hisamitsu led all scorers with 19 points (18k, 1b). Her Hisamitsu teammates Akinradewo 13 (10k, 1b, 2a), Nomoto 11 (all kills), Shinnabe 9 (7k, 2b) and Iwasaka 8 (4k, 4b) made the Springs unstoppable. Mihajlovic for JT led her team with 17 (16k, 1b), but she was the only one reaching double figures. Aika Akutagawa (7k, 1a) and Yuka Meguro (all kills) each had 8 points in the loss. JT will need to win next Saturday to force the match to a “Golden Set”, otherwise the Springs will be champions.