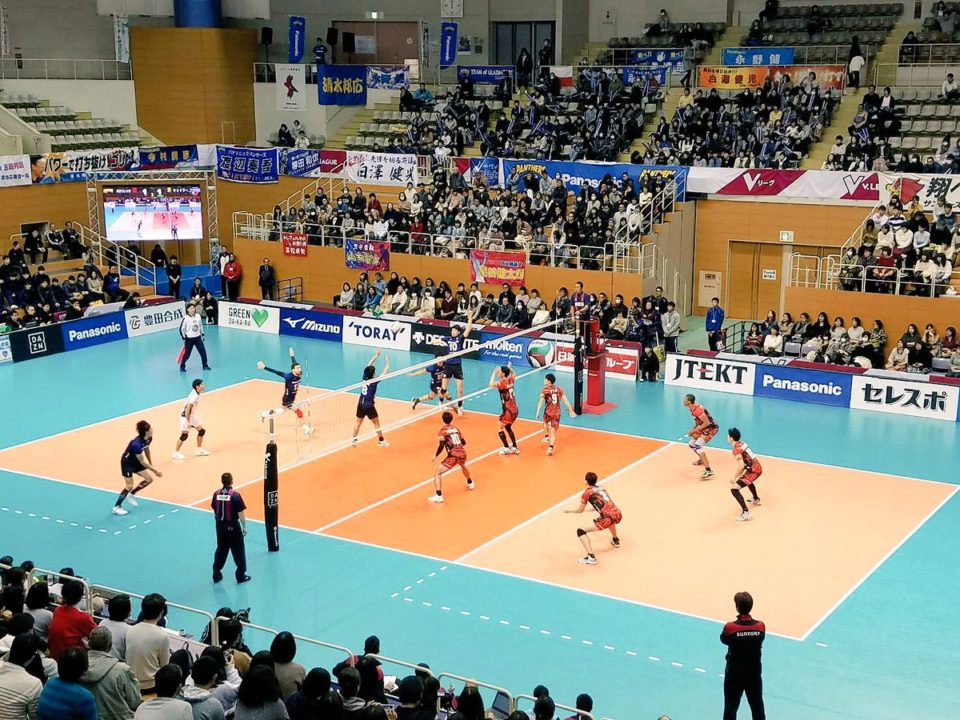 With the first matches of 2018 leading the sprint for the Final 6, Panasonic Panthers were looking to extend their win streak to 10 matches as they faced their Osaka neighbors Suntory Sunbirds. Kunihiro Shimizu was unstoppable for the Panthers with 17 kills on 23 swings and 19 points total with 2 blocks. Poland’s Michal Kubiak had 4 blocks, an ace and 9 kills to support his teammate. Throw in 12 (11k, 1b) from Tatsuya Fukuzawa and it was an easy win for the Panthers 3-0. Cuban Yadrian Escobar had 11 (9k, 1b, 1a) in the loss for Suntory. Panasonic is two wins away from clinching the best record in the regular season.

With the return of Igor Omrcen, Toyota Gosei Trefuerza were looking to keep second place with a win against FC Tokyo. Tokyo got their first win of the season in the last V.League match of 2017 and wanted to have a win streak. Toyota were incredibly efficient on offense with only three hitting mistakes (blocked) in 74 swings. The Trefuerza had 48 kills for a hitting efficiency of .608 as a team. Throw in 10 blocks by Toyota as well, and Tokyo didn’t have a chance. Croatian Igor Omrcen for Toyota and Tokyo’s Milan Pepic each had 18 points to lead all scorers.

In a battle for third place, Toray Arrows met JT Thunders. Both teams split the first two sets but the Arrows asserted their strength in the third set to take a 2-1 lead. JT came from two points down late in the fourth set to tie the score at 23-23, but Toray scored the next two points to win the set 25-23 and match 3-1. Australian Thomas Edgar had 9 aces for the Thunders in addition to 19 kills and 3 blocks for 30 points. However Canadian Gavin Schmitt had 32 (28k, 1b, 3a) points for Toray. Takaaki Tomimatsu for the Arrows helped dominate the blocking battle with 5 blocks of his team’s 13 blocks, while JT only had 6 in the match. Toray is one point behind Toyota, but tied on wins.

Lastly, Sakai Blazers were trying to stay alive in the battle for the Final 6 when facing JTEKT Stings. Sakai were two wins behind the Stings who are in sixth place. The first set went to extra points, but the Blazers won 30-28. Sakai continued to control the match by taking late leads in the second and third sets to win each 25-20 and the match 3-0. Sakai is now one win behind the sixth and final playoff spot Stings.The Blazers won the spiking and blocking battle at the net by 11 and 7 respectively for an 18 point advantage. Brazil’s Wallace Martins had 23 (21k, 1b, 1a) for Sakai in the win, while Bulgarian Matey Kaziyski had 15 (12k, 1b, 2a) for the Stings in the loss.