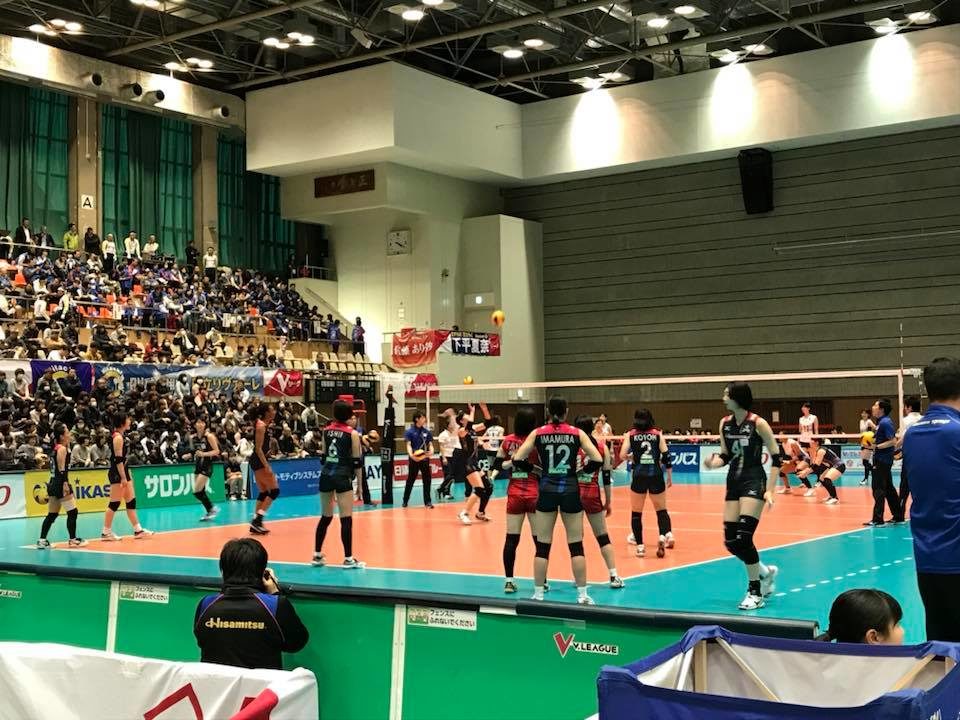 After Denso’s upset of Hisamitsu Springs in the Empress Cup, could Hisamitsu finish the V.League undefeated? However on Saturday there was one thing that defeated them, the lighting in the Oita Prefectural General Gymnasium. In the first set with Hisamitsu leading Hitachi Rivale 6-3, the lights went out just before a serve. The match was delayed for 18 minutes before it was restarted. The picture above is actually the teams warming up during the delay. Hitachi played well in this match throughout, but Hitachi could not keep their spikes in play, which gave Hisamitsu a 3-0 sweep. Both teams had three players in double figures in spikes. Rika Nomoto had 19 points (15k, 4) in the win for the Springs, while American Cursty Jackson (11k, 3b, 1a) and Hisae Watanabe (15k) each had 15 for Rivale in the loss. The Springs are still perfect after 16 matches. Either a combination of a Springs win and a JT loss or two Springs wins will clinch the best regular season record for the Springs.

JT Marvelous would clinch a Final 6 berth with a win over Toyota Auto Body Queenseis. Toyota were looking to add momentum to their stretch run after their Empress Cup win last month. Both teams split the first two sets by the same score 25-18. JT took the third set 25-19 to take a 2-1 set led. The Marvelous had a lead in the fourth set, but Toyota brought it back to a one point deficit at 23-24, but a JT spike ended the set and match 3-1. Turkey’s Neriman Ozsoy had 30 (28k, 2b) for the Queenseis leading all scorers and Serbian Brankica Mihajlovic for JT had 26 (25k, 1b) in their win. Erika Araki for Toyota had 7 blocks, while Mai Okumura had 6 blocks for JT in a great individual battle. Misaki Tanaka had 4 aces for the Marvelous while Araki had 3 for the Queenseis. With the win JT Marvelous clinch a berth in the Final 6, and more than likely second place in the regular season.

Denso Airybee and NEC Red Rockets had a tight five set match. Both teams were very good in spreading their offense around with four players each for Denso and NEC in double figures for kills. In the final set both teams matched each other point for point until 8-8. Denso took a 10-9 lead and expanded it to three, which they would hold to win the match 3-2. With the win Denso maintained their third place position. Sarina Koga for NEC had 26 (24k, 2b) leading all scorers. Mizuho Ishida matched her with 25 (19k, 4b, 2a) for the Airybees in their win. Yurie Nabeya also put up 20 (18k, 2a) for Denso. Haruyo Shimamura had 4 aces off the bench for NEC.

Toray Arrows were looking to keep pace with Denso against the Ageo Medics. The teams split the first two sets, but Toray dominated in the third 25-14. Ageo had a lead in the fourth but could not hold it which enabled Toray to win the match 3-1. Ageo as has been the case all season leaned on Cuban Kenis Carcaces who had 34 (28k, 4b, 2a) points, but no other player for Ageo got into double figures. Kadie Rolfzen had 26 (24k, 1b, 1a) and Mari Horikawa 19 (15k, 2b, 2a) for the Arrows. Toray had a 8 point advantage at the service line (+4 aces and -4 errors) to give them the win.