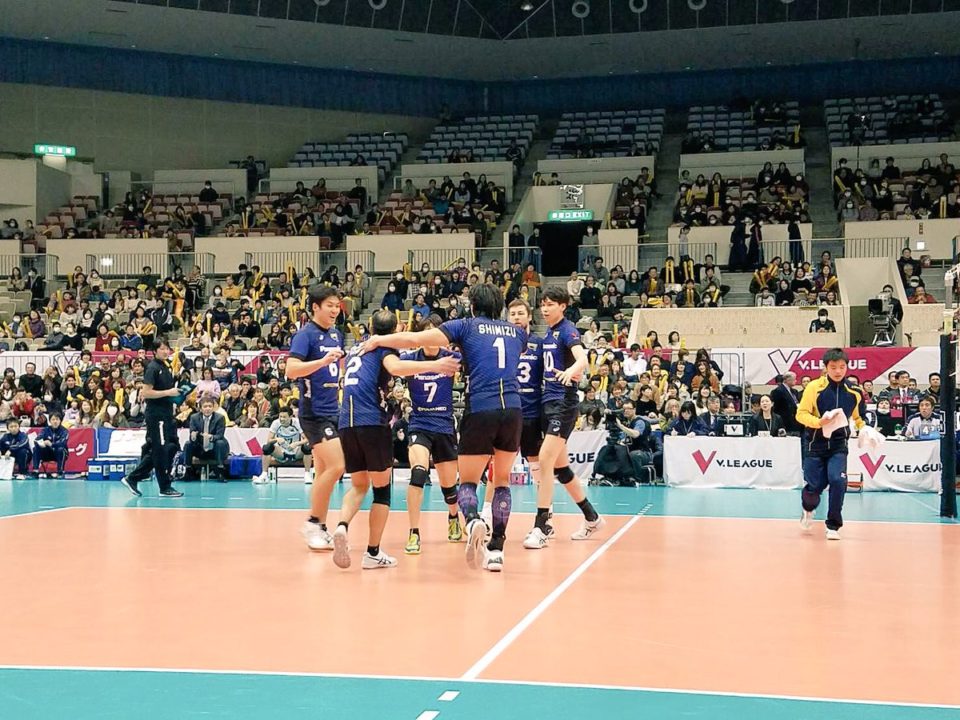 With four matches left in the regular season and two spots in the playoffs still available, Panasonic had a chance... Current Photo via Panasonic Panthers

With four matches left in the regular season and two spots in the playoffs still available, Panasonic had a chance to clinch the regular season title against their Osaka rivals Sakai Blazers. The Blazers are in seventh place and a win would keep them in the hunt for the playoffs. Both teams split the first two sets, Sakai took a tight third set 25-23 to take a 2-1 set lead. Panasonic needed to win the fourth set to clinch the regular season title by earning a point in the match. The Panthers got a lead late and extended it to take the set 25-21 to force a deciding fifth set. Sakai was desperate to stay alive in the playoff chase and came back at 14-12 with two straight points to tie at 14 all. Panasonic though took advantage of a shanked pass on serve to end to the set 18-16 and win the match 3-2. First place in regular season and five bonus points for the Final 6 playoffs for the Panthers with the win. Sakai with the single point gained something, but it could have been so much more for them. Brazilian Wallace Martins for the Blazers had 28 points (25k, 2b, 1a) to lead all scorers. Kunihiro Shimizu led the Panthers with 25 (24k, 1b) and Michal Kubiak followed with 19 (15k, 3b, 1a) in the win.

With the Blazers loss, JTEKT Stings faced Suntory Sunbirds with a chance to extend their sixth place lead (1 point) over Sakai.  Suntory dominated the first set, 25-14 and the Stings knew that they had to fight back. JTEKT swept the next three sets to win the match 3-1. High schooler Yuji Nishida has been a revelation for the Stings with 28 points (25k, 1b, 2a) on Saturday to lead all scorers.  His teammate Bulgarian Matey Kaziyski must love having him because he is now not the focus of the offense. Kaziyski had 21 (18k, 3a) in the win. Cuban Yadrian Escobar for the Sunbirds had 22 (19k, 2b, 1a) in the loss. Both teams are tied with 7 wins, but Suntory is fifth with 25 points, while JTEKT only has 22. JTEKT is now four points and two wins ahead of Sakai for the final playoff position.

Toray Arrows met FC Tokyo and were trying to overtake Toyota Gosei Trefuerza for second place. Toray won the blocking and serving battles in the match. FC Tokyo also put the ball out of play more when spiking which gave the match 3-1 to the Arrows. Kenta Suzuki for FC Tokyo led all scorers with 19 points (18k, 1b). Toray’s Yuji Suzuki led his team with 11 (10k, 1a).

The biggest battle of the weekend was Toyota Gosei Trefuerza against JT Thunders. The foreign spiking machines of Igor Omrcen (Toyota) and Thomas Edgar (JT) did not disappoint. Both players reached over 40 points, 42 (39k, 1b, 2a) for Omrcen and 43 (41k, 2a) for Edgar, essentially a draw between them. Their 85 combined points are the most for two opponents in a match in the world this season. Even the match was essentially a draw going five sets, with three sets going extra points, including a 40 minute long second set at 34-32 to Toyota. Trefuerza get the last two points of the match to take the fifth set 17-15 and the match 3-2. The win keeps Toyota in second place with three matches to play. The loss for the Thunders leaves them solidly in fourth place. Ryota Denta had more points combined serving and blocking 9 (6b, 3a) for the Trefuerza than from spiking 7 for 16 total points.