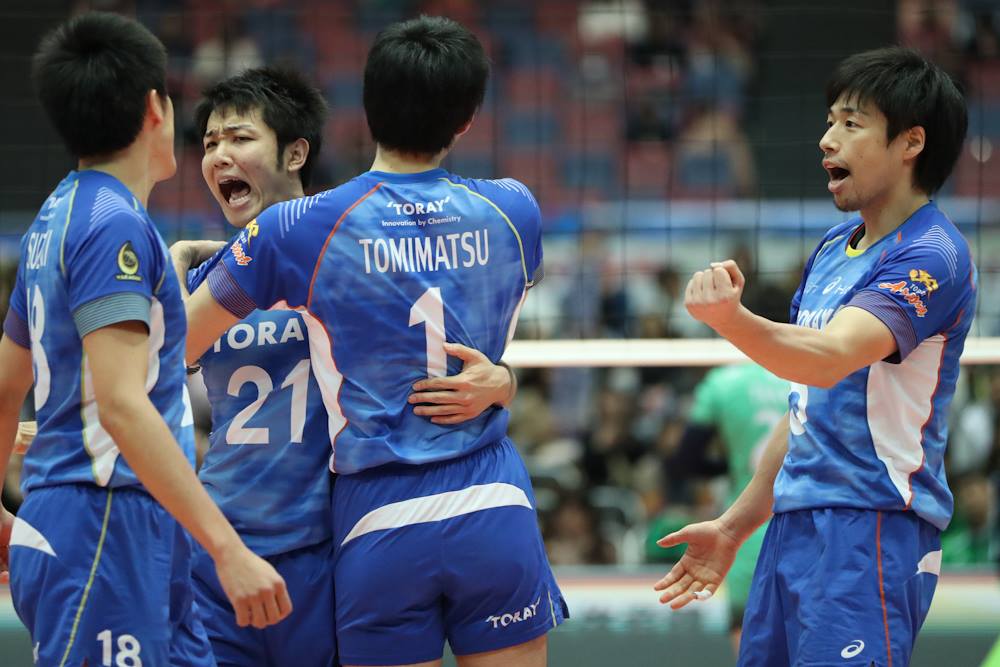 In the Japanese men’s V.League Saturday was the final tripleheader, but only two matches had playoff implications, Panasonic Panthers vs.... Current Photo via Japan V.League

In the Japanese men’s V.League Saturday was the final tripleheader, but only two matches had playoff implications, Panasonic Panthers vs. Toyota Gosei Trefuerza and JT Thunders vs. Toray Arrows.

Panasonic have had a very difficult week with the loss of Kunihiro Shimizu to a severe knee injury that will keep him out for a year, the Panthers loss to the Thunders in that match, and a fine for the Panthers of nearly $10,000 for not fielding their strongest lineup in the 20th match of the season in January that was announced on Friday by the V.League. If Panasonic could win the match, they would advance directly to the final, no matter the results of the remaining matches in the Final 6. A Trefuerza win would guarantee a berth in the Final 3 (Semifinal), but they could not overtake the Panthers due to the Panthers better regular season finish, which would be the tiebreaker if the teams tied on points. In the first set, Toyota sprinted to a six point lead, but the Panthers whittled away that deficit to take a two-point lead. However the Trefuerza were able have a set point at 24-23, which the Panthers won to force extra points. An Igor Omrcen kill was followed by a Hirotaka Kon ace for the Trefuerza set win 26-24. In the second set, Toyota turned a tight set in their favor with a 7-1 run to give them a six point lead, which they held to take a 2-0 set lead. With the Panthers on the ropes, Toyota went for the knockout early and had a five-point at 14-9. However, the Trefuerza had match point at 24-22 and the Panthers Michal Kubiak kept them alive at 23-24. Omrcen had a chance to end the match, but mishit the ball to tie the set at 24 and onto extra points for the second time. At 27-27 Panasonic served out to give the Trefuerza match point for the sixth time. A Kubiak one handed dig, turned into a free ball for Toyota, which appeared to be a quick set in the middle and caused two Panthers to commit which gave Takuya Takamatsu zero blockers on the left side to swing against to end the match, which he did, 29-27 and a 3-0 sweep for Toyota. The win put Toyota into the Final 6 and Panasonic needs a loss by JT or two wins by JT in 5 sets (dropping 2 points to tie at 14) to directly advance to the Final. Omrcen led all scorers with 21 points (16k, 3b, 2a) for the Trefuerza. Takamatsu also contributed 16 points (15k, 1b) for Toyota in the win. Toyota used 5 more aces and 5 more blocks (4 for Kon) to give them the gap over the Panthers. The remaining Two Musketeers (without Shimizu as the third one) of Kubiak and Tatusya Fuzukawa gave 17 (16k, 1b) and 15 (13k, 2b) respectively to the Panthers in the loss.

In the second match of the day, third place JT Thunders met the Toray Arrows. A win by JT would give them a berth in the Final 3 (Semifinal) and the potential to go directly to the Final with a win on Sunday. Toray needed a win to stay alive in the fight for the Final 3. In a tight match throughout, the Arrows took each of the three sets by the minimum two points to sweep 3-0. The win moved the Arrows even on points with the Thunders to 10 points in the Final 6. However, Toray owns the regular season finish tiebreaker, which puts them into third place with one match to play. Additionally with the Toray win, neither Toray nor JT can match the Panasonic Panthers point total of 14, which means that the Panthers will advance directly to the Final. Thomas Edgar for JT and Gavin Schmitt for Toray were the focus of both teams offense. Edgar had 29 kills on 45 swings and an ace to finish with 30 points. Schmitt nearly matched Edgar with 26 kills on 40 swings, and added a block and an ace for 28 points. Both teams were incredibly efficient spiking with the Thunders with a .500 hitting percentage and the Arrows at .467. However, the Arrows won the service line battle 6-1, with Toray’s Yuji Suzuki contributing three aces. With a six point difference in the match the service aces gave Toray the match. Suzuki was the only other Toray player to reach double figures with 12 (9 kills). Shohei Yamamto was the only other Thunders player to reach double figures with 13 (all kills). Toray’s and JT’s scenarios for the Final 3 on Sunday are listed below.

In the last match of the day, JTEKT Stings and Suntory Sunbirds met in a battle for fifth place. Stings took another tight three set match in a sweep over the Sunbirds to move into fifth place. Suntory’s Yadrian Escobar (16k, 1b, 1a) and JTEKT’s Yuji Nishida (16k, 2b) each finished with 18 points to lead all scorers. Masashi Kuriyama for Suntory was a wall with six blocks in the loss. 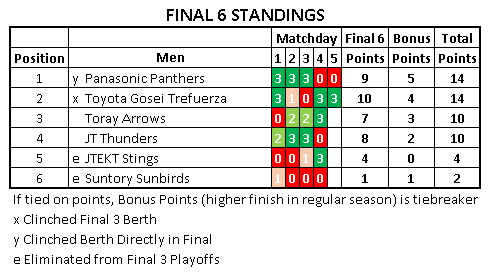