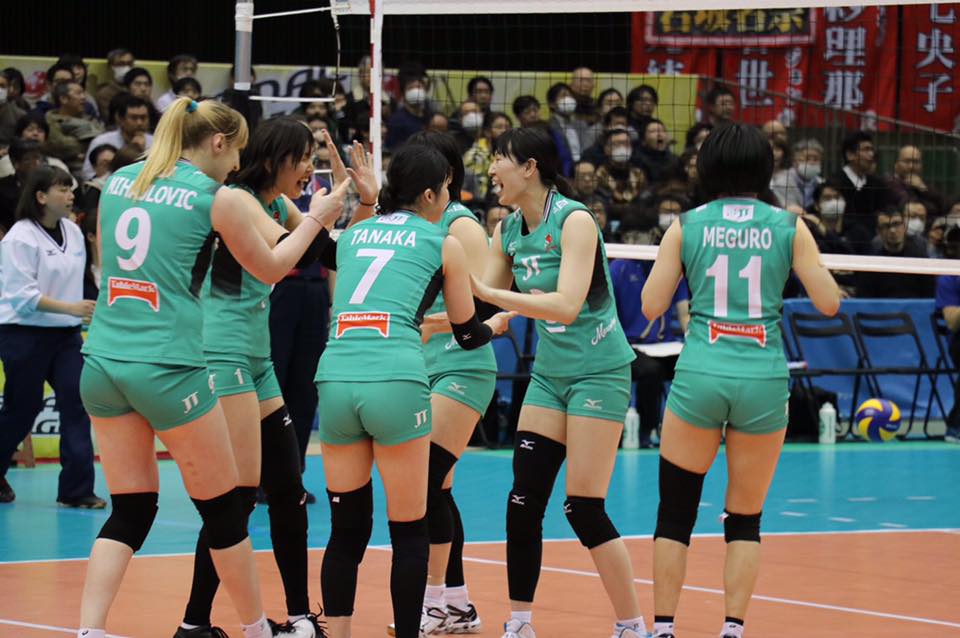 All three matches in the last tripleheader of the Final 6 in the Japanese women’s V.League were played on Saturday... Current Photo via JT Marvelous

All three matches in the last tripleheader of the Final 6 in the Japanese women’s V.League were played on Saturday and each match had big implications on the Final and the Final 3 (semifinal) positions. The biggest match of the day was the battle between the 1st place Hisamitsu Springs and the 2nd place JT Marvelous. If Hisamitsu won two sets, they would advance to the final directly, while a JT win in less than four sets would put the Marvelous into the Final and give Hisamitsu its first loss in the V.League this season. The first set was tied at 19 before the Marvelous made a late 6-3 run to take the first set 25-22. The second set started with the Marvelous getting out to a five point lead at 12-7. Hisamitsu whittled it down to one at 20-19. JT again made a late 5-1 run to take a 2-0 lead against the Springs. JT knew that this was their chance to show that they belonged in the final and jumped out to a 14-7 lead. The Springs could not catch up and the Marvelous ended the Springs perfect season. In doing so, the Marvelous win the Final 6 and clinch a berth in the Final, while Hisamitsu will have to play in the Final 3. The way that JT won this match was with their block. In the regular season JT averaged 2.17 blocks a set, but in the Final 6 it had dropped to 1.75 per set. On Saturday, in a three set match the Marvelous had 14 blocks, while Hisamitsu only had 7. Essentially two points a set difference. JT’s Aika Akutagawa and Mai Okumura each had five blocks, which considering their opponents of Nana Iwasaka (5b) and Foluke Akinradewo (1b) who combined for 6 was a major factor in the win. Hisamitsu all season had a balanced offense that could lean on an individual player when needed. Saturday was the only day where the balance was not as effective as it had been all season. Only Yuka Imamura reached double figures in the match for the Springs and that was 10 points (all kills). Brankica Mihajlovic for the Marvelous led all scorers with 23 points (20k, 2b, 1a) and was named woman of the match. Okumura and Akutagawa each added 11 (5k, 1a) and 13 (7k, 1a) respectively in the Marvelous win.

Third place Toyota Auto Body Queenseis met sixth place NEC Red Rockets in a crucial match for the final position in the Final 6. A win by NEC would keep them alive, but a loss would eliminate them. A win by Toyota would give them some breathing room over Denso and possibly clinch a spot in the Final 3 if Denso lost in 5 sets. The Queenseis jumped out to a 6 point lead in the first set, and just kept rolling to an easy 25-14 win. The second set was much tighter, but the Queenseis went on a 5-1 run to end the set 25-21 and take a 2-0 lead. At the beginning of the third set, NEC knew that they had fight back to stay alive and had a eight point lead at 11-3 and Toyota had already used their last timeout in the set. The lead was still at eight at 15-7, before Toyota went on a crazy comeback. Four straight Toyota points before NEC replied with two straight to make it 17-11. Both teams swapped points to make it NEC 18-12. Three straight points by Toyota before a NEC kill brought in to 19-15. Two more Toyota points, before a swapping of points to make it 20-18. The Queenseis Aya Watanabe then went to the line to serve and NEC could not get out of the rotation with Erika Araki with a kill and a block to tie the set at 20-20. Watanabe then served an ace from corner to corner for a 21-20 Toyota lead. An Araki tip from the middle made it 22-20, and then Araki killed an overpass to made it 23-20. A 5-0 run to complete a 16-5 run (from 15-7 down) by the Queenseis to take back control of the match. Araki added the 24th point with a kill and Neriman Ozsoy ended the match with a kill for a 3-0 win for Toyota. Neriman finished with 25 points (23k, 1b, 1a) to lead all scorers. Araki with 14 (11k, 2b, 1a) and Watanabe with 13 (9k, 1b, 3a) contributed in the win. Sarina Koga had a great service day with 5 aces to go with 6 kills and 2 aces for 13 points to lead the Red Rockets in the loss.

Denso Airybees met Toray Arrows in an elimination match for the loser. There was also a scenario in which both teams would have been eliminated from the Final 3 if Toray won in five sets and neither team could surpass Toyota’s 8 points. Toyota’s regular season finish of third would be the tiebreaker if they all finished at 8 points. Denso took a late 9-5 run to take the first set 25-21. In the second set, Toray had two set points at 24-22, but they could not put away the Airybees who took the set 29-27 in extra points and eliminated the Arrows from Final 3 contention. The third set was a swapping of lead through big runs. Denso led 10-7, but a 4-0 run by Toray gave the Arrows a 11-10 lead. Denso responded with a 5-0 run to take a 15-11, which they expanded to sweep the match 3-0. Denso’s Nanaka Sakamoto (16 k) and Yurie Nabeya (14k, 1b, 1a) and Toray’s Mari Horikawa (15k, 1b) all tied for leading scorer with 16 points. Denso’s win means that they will face Toyota for the final spot in the Final 3 on Sunday. The scenarios for both teams is shown below. 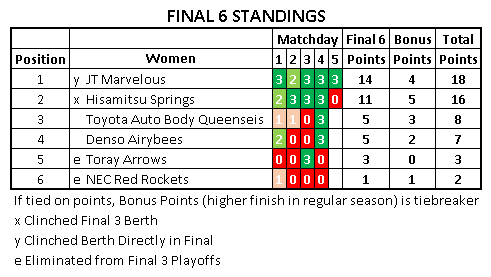 Any news on next season new professional Japanese V-League and which team will take part in it?

I did an article in December when they first announced which teams had met the difference license levels. With the results for the different levels I think that they will take into account the results of the past season to allocate which teams are in which league.
I have not been able to visit IVC board since this weekend, but they may need to pay more to upgrade the system.

Yeah, I had already read that article of your previously.
I hope IVC forum get fixed asap.
Thanks and keep up the good work.

IVC board is back up and running as of this morning.