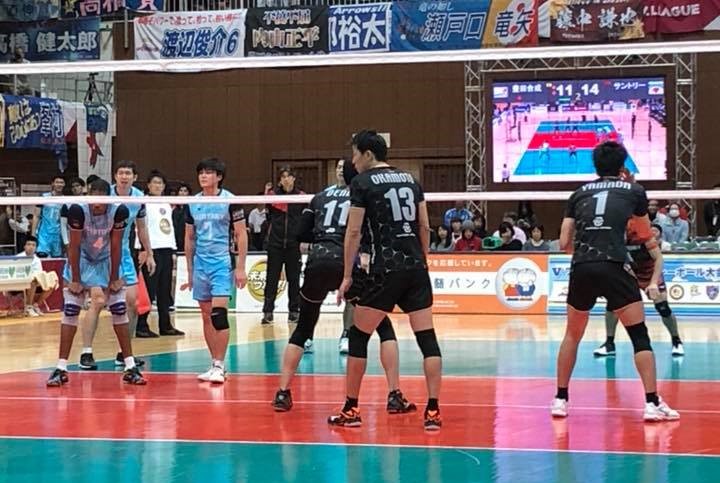 The Panasonic Panthers were looking to further extend their seven match winning streak when entering matchday 13 against their Osaka... Current Photo via Toyota Gosei Trefuerza

The Panasonic Panthers were looking to further extend their seven match winning streak when entering matchday 13 against their Osaka neighbors Sakai Blazers. The Blazers were looking to keep pace in the race for the Final 6 playoff berths. The Blazers surprised by not only taking the first set, but the second set as well to have the league leaders on the ropes 2 sets to 0. Panasonic had only went to a five set once this season, and would be forced to do so again to win the match. The Panthers won a close third set 25-23, and then dominated the fourth to force the match to a fifth set. Panasonic had a lead, but the Blazers took a 13-12 lead in the fifth. However, the Panthers won the next three points to the set 15-13 and the match 3-2. This match was decided at the service line as the Panthers were +2 aces (4-2) and -7 on service errors (10-17) for the 9 point difference in the match. Sakai could have won this match in 3 sets, but did not and it could cost them a playoff spot. Sakai’s Brazilian Wallace Martins led all scorers with 25 points (23k, 2b). Poland’s Michal Kubiak led the Panthers with 21 points (16k, 1a), four of which were blocks.

JT Thunders and Toray Arrows met in battle for 2nd place. A win by Toray gave them the chance to leapfrog the Thunders, if Toyota Trefuerza lost. The Thunders were looking to solidify their 2nd place position with a win. JT got out to a 2-0 set lead, which forced the Arrows to fight back, which they did to win sets 3 and 4, to force a fifth set.  JT got out to a 4-1 lead in the fifth, but a 5-1 run by Toray put them ahead 6-5. Toray kept that led the rest of the way to win the set 15-12 and the match 3-2. By winning the 2 sets, JT did prevent the Arrows from receiving the full 3 points for the match win and held 2nd spot, while Toray moved into 3rd spot. Australian Thomas Edgar had 30 points for JT (27k, 2b, 1a) leading all scorers while Canadian Gavin Schmitt had 28 (25k, 2b, 1a) for Toray, essentially cancelling each other out. However Schmitt had help from Takaaki Tomimatsu 13 (10k, 3b) and Yuji Suzuki 14 (10k, 2b, 2a) for the Arrows. JT’s Shohei Yamamoto was the only teammate for Edgar in double figures with 18 (15k, 2b, 1a) in the loss.

FC Tokyo, who are still winless on the season faced JTEKT Stings. The Stings were in the 6th place and a win would give them a two-win advantage over Sakai after their loss to Panasonic. JTEKT were more successful at the net with 12 point advantage (+9 kills (60-51) and -3 errors (6-9)) and with 5 more aces (8-3), to give them the win 3-1. In a battle of foreign opposites, Bulgarian Matey Kaziyski won with 38 points (34k, 2b, 2a) for JTEKT to Bosnian Milan Pepic‘s 32 (30k, 2b) for FC Tokyo. The Stings are solidly in 6th place ahead of Sakai in 7th.

Suntory Sunbirds were battling the Toyota Gosei Trefuerza. A win by Toyota would move them into 2nd, while a win by Suntory would keep them in 5th place. Trefuerza have had a hard time replacing their Croatian superstar Igor Omrcen and today proved the same. None of their players reach double figures, they were out killed (36-27) and outblocked (13-7) by Suntory in the sweep loss. Cuban Yadrian Escobar led all scorers with 15 points (12k, 3b) for Suntory. Kentaro Hoshiya for the Sunbirds led all blockers in the match with 4.

The V. League will take a break for the Emperor’s Cup over the next two weekends, and will be on break for New Years, with play returning on January 6th with Matchday 15.