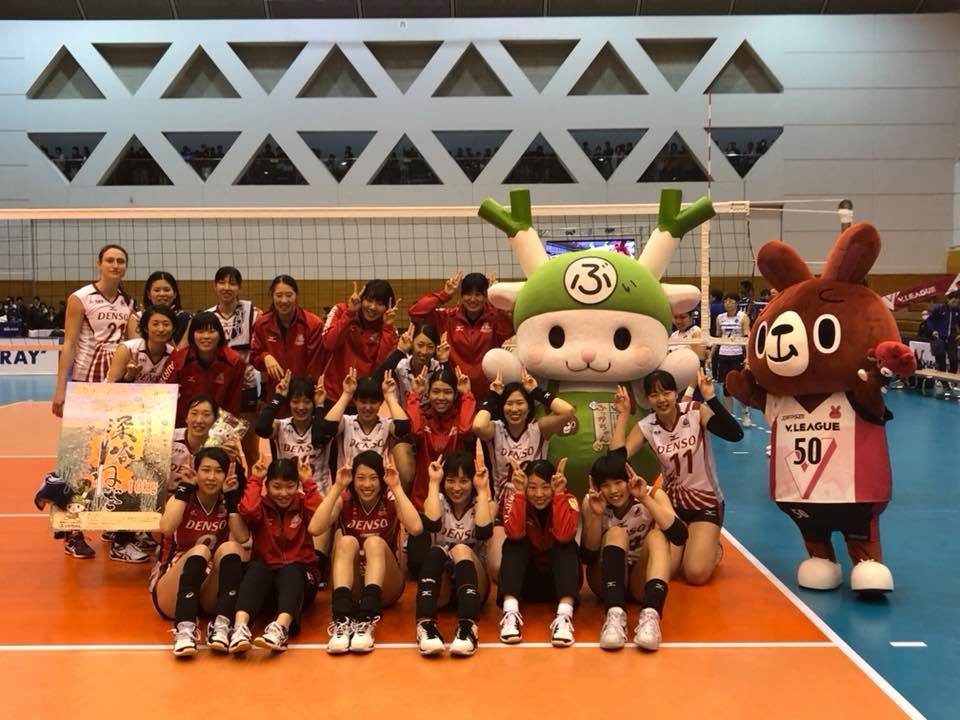 Going into the last match of the 2nd leg, each leg being 7 matches, the sprint for the Final 6... Current Photo via Denso Airybees

Going into the last match of the 2nd leg, each leg being 7 matches, the sprint for the Final 6 starts now. Hisamitsu were looking to continue their perfect season against the Toray Arrows who were in third place. If the Arrows could beat the Springs, it would be great win for this young team. Toray surprised Hisamitsu by taking the first set 25-22. Hisamitsu came back in a close second set to tie the match at 1 set each. The Springs then put their foot on the gas to take the third and fourth sets easily to win the match 3-1. Yuka Imamura for Hisamitsu was the leading scorer in the match with 26 points (25k, 1b). Yuki Ishii had 4 blocks for the Springs, who were outblocked by Toray 11-7. Nanami Inoue and Kaho Ohno had 4 blocks each for Toray. American Kadie Rolfzen had 21 points (20k, 1b), Ai Kurogo 20 (17k, 1b, 2a) and Mari Horikawa with 16 (15k, 1b) for the Arrows in the loss. Hisamitsu still perfect and with 7 more wins a perfect regular season. Toray stays in 3rd with the result.

Denso Airybees were looking to end their three match losing streak and met NEC Red Rockets who were trying for their third straight win. Denso dominated the first set 25-15, but the Rockets came back to take the second 25-21. Denso used their blocks and NEC’s hitting errors to take the third and fourth sets at the same score 25-22 to win the match 3-1. Denso had 16 blocks to 11 for NEC. Mizuho Ishida and German Christiane Furst had 6 and 5 blocks respectively for Denso, while Nanami Hirose had 4 blocks as part of her 20 points for NEC. Ishida led all scorers with 22 points (14k, 2a) and Yurie Nabeya had 17 points for Denso (15k, 1b, 1a). Denso jumped into 4th place with the win, while NEC dropped to 6th place.

In a battle for 7th place, Ageo Medics faced Hitachi Rivale. If Hitachi lost, they would be 2 wins plus points away from making the Final 6. Ageo would have been in last if they had lost this match. Ageo used their tried method of giving Kenia Carcaces the ball. She did not disappoint today with 29 points (26k, 2b, 1a) which led all scorers. Where Hitachi lost this match though was at the service line. Ageo had 10 aces to 0 for Hitachi. Yuki Araki had 4 aces for the Medics in the win. Hisae Watanabe was the only player to reach double figures with 10 (9k, 1b) for Rivale. Ageo stays in the playoff hunt, while Hitachi is running out of chances to catch up.

JT Marvelous were looking to solidify their second position when facing the Toyota Auto Body Queenseis. This was a close three set match, with Toyota winning the spiking battle by 8 kills, but hitting 11 more balls out of bounds. JT also took advantage of Toyota with 5 more team faults, which added up to 8 of the 10 points difference in the match. Toyota could have moved into 3rd place with a win, but instead fell to 5th place. JT is now 3 full matches ahead of Toray in 3rd place. I doubt that they will catch the Springs for the regular season title, but can they end their undefeated season? Turkey’s Neriman Ozsoy had 27 (26k, 1a) for the Queenseis in the loss.  Her teammate Erika Araki had 18 (9k, 5b, 3a) in a great multi-discipline performance for the middle blocker. Serbian Brankica Mihajlovic led JT with 14 points, all kills, while her teammate Mai Okumura had 4 blocks to go with 4 kills for 8 points.

The V. League will take a break for the Empress’s Cup over the next two weekends, and will be on break for New Years, with play returning on January 6th with Matchday 16.