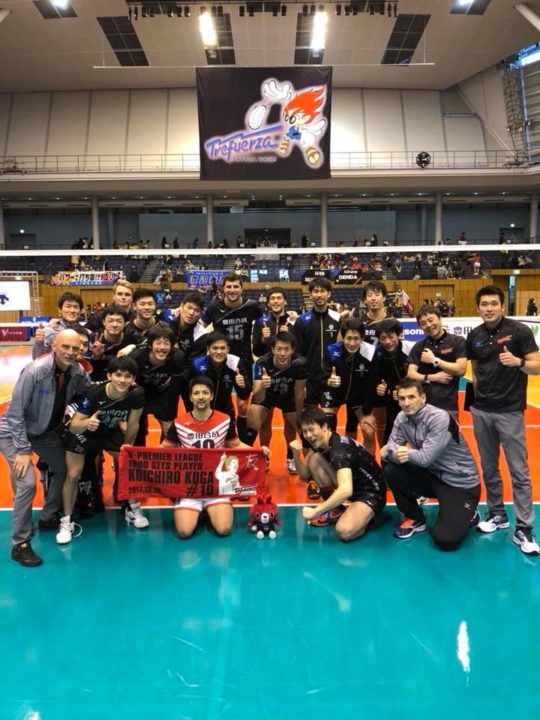 This weekend was a light one for the Japanese Men’s V.League with only four matches. Suntory Sunbirds and Toray Arrows... Current Photo via Toyota Gosei Trefuerza

This weekend was a light one for the Japanese Men’s V.League with only four matches.

Suntory Sunbirds and Toray Arrows faced off on a Friday night in Tokyo. Suntory got out to early leads in each of the three sets and Toray was never able to catch up in a 3-0 sweep for the Sunbirds. Cuban Yadrian Escobar had 13 points (10k, 1b, 2a) to lead the Sunbirds, while Takahiro Tozaki had 13 (12k, 1b) for Toray. Canadian Gavin Schmitt was not listed on Toray’s roster for the match. With the win Suntory extends their points gap over JTEKT and Sakai for fifth place.

In the big match of the week, the Panasonic Panthers faced Toyota Gosei Trefuerza in a battle of first and second place. Both teams had split the first two meetings in the season. A Panasonic win would clinch the regular season title, while a Toyota win would postpone their celebration by a week. Two of the sets in the match were extra point sets, and were split between the two teams. However in the second and fourth sets, Trefuerza dominated 25-17 and 25-16, which gave them the match 3-1 over the Panthers. Croatian Igor Omrcen led all scorers with 30 points (26k, 1b, 3a) for Toyota.  His teammate Takuya Takamatsu also contributed 19 (16k, 2b, 1a) in the win. Kunihiro Shimizu had 27 (22k, 3b, 2a) for the Panthers in the loss. Michal Kubiak only played in the first two sets for Panasonic. The win for Toyota solidified their second place position with four matches left. Panasonic with one point will clinch the regular season title as Toyota could only reach a maximum of 45 points. Toyota would need Panasonic to lose out and then Trefuerza would have to win all of their matches in 3 or 4 sets to tie on points, but overtake Panasonic on wins (16-15). Highly unlikely for that to happen.

JT Thunders faced the Sakai Blazers in Wakayama on Saturday. JT with a win would clinch a berth in the Final 6, while a Blazers win would move them into the Final 6, if JTEKT lost. JT used Australian Thomas Edgar‘s 29 kills to get out to leads in each of the three sets, and Sakai had to catch up in each set. In the third set, Sakai did tie it at 21-21 each, but they were outscored 4-2 to end the match in a sweep 3-0 for the Thunders. Brazilian Wallace Martins had 19 in the loss for Sakai. The Thunders win tied them on points with Toray, but still one win behind (11-10) with four matches left. Sakai is still on the outside looking in at the Final 6 in seventh place.

FC Tokyo met the JTEKT Stings in Tokyo. A JTEKT win would give them a bigger gap over Sakai in the battle for the last spot in the Final 6. FC Tokyo could play a spoiler with a win. Tokyo won the first two sets which were tight. JTEKT comfortably took the third set in a battle to at least get some points from a winnable match. However Tokyo got out to an early lead and extended it to win the match 3-1 in an upset. FC Tokyo had a really balanced day on offense with only one starter under a .500 hitting percentage. Dai Tetsuka had 18 kills, and Bosnian Milan Pepic 17 points (15k, 2b) to lead Tokyo in the win. For JTEKT Yuji Nishida had 30 (29k, 1) in the loss. Matey Kaziyski was off with 8 kills and 5 errors on 27 swings for the Stings. JTEKT with the loss is still in sixth place, but a Sakai win and a JTEKT loss would have them out of the playoffs.