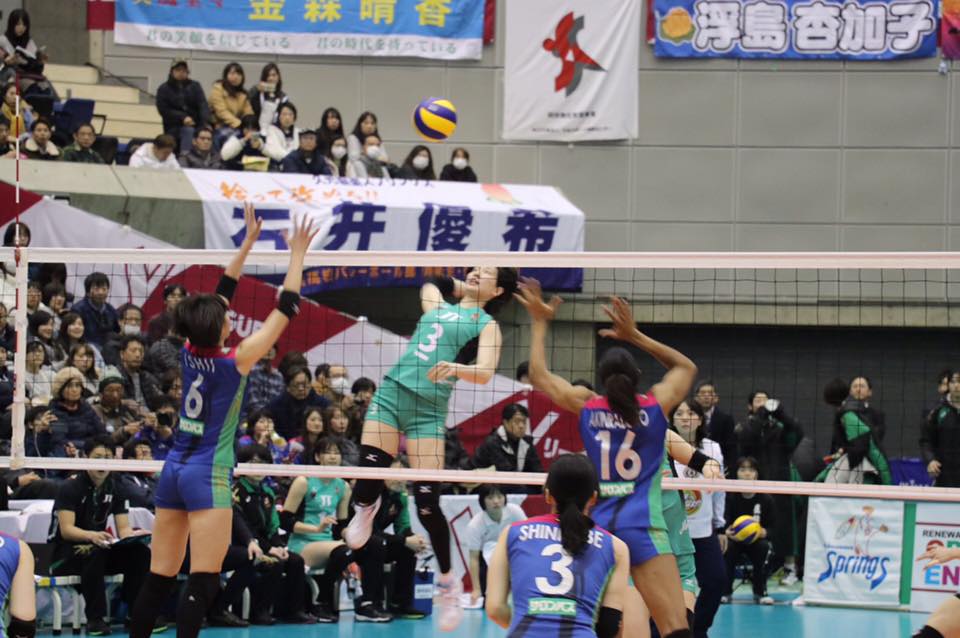 An odd weekend in the Japanese women’s league, with some teams playing twice, others once and NEC not playing at... Current Photo via JT Marvelous

An odd weekend in the Japanese women’s league, with some teams playing twice, others once and NEC not playing at all.

The biggest match of the weekend was first place Hisamitsu Springs facing second place JT Marvelous on Saturday. Could JT upset Hisamitsu to end their unbeaten streak, or would the Springs clinch the regular season title with a win? The answer by Hisamitsu to JT was, “You will not beat us tonight.” The Springs swept the Marvelous 3-0 convincingly. Rika Nomoto with 16 kills (19 points with 3 blocks), Foluke Akinradewo with 15 kills (17 points with 2 blocks) and Yuki Ishii with 13 kills (14 points with 1 block) provided the offensive balance for the Springs. JT forced the ball through Brankica Mihajlovic, but her 19 kills were hurt with 8 hitting errors. No other JT player had double figures in spikes. It is tough for any team to compete with Hisamitsu without your best hitter making kills. Hisamitsu has clinched the regular season title with the win.

On Saturday Denso Airybees met Toray Arrows in a battle for third place. A Toray win would possibly have them move into third place (depending on if they got 3 or 2 points), while Denso would solidify their third place with a win. Both teams split the first two sets, while a dominant third set by Toray gave them a great chance to take the match. However, Denso had a three point lead that really did not shrink in the fourth set to take the match to five sets. In the fifth set, Denso had a 12-9 after a block and looked to end the match. A service error by Denso and an unreturnable serve brought that match back to a one-point deficit. After swapping points, and ace by Toray tied the set at 13. A Denso kill off the block gave them match point at 14-13. Mari Horikawa killed off the block, and onto extra points. The teams swapped points until a block by Toray gave them match point at 17-16. Denso got a kill match the score at 17. A Nabeya hitting error gave Toray another chance at 18-17, but the Arrows could not keep the ball in play, 18 all. The teams swapped points, and a challenge review by Toray got it to 20-20, which would have gave Denso the match at that time. A kill by Christiane Furst gave Denso the lead 21-20. Toray shanked a serve which forced Mari Horikawa to be blocked for Denso to win the set 22-20. A heartbreaking loss for Toray as they had outscored Denso by seven points in the match. American Kadie Rolfzen with 38 (31k, 5b, 2a) and Mari Horikawa with 27 (25k, 1b, 1a) for the Arrows performed well, but the needed a little more help in the loss. Yuri Nabeya led Denso with 22 points (19k, 2b, 1a). Denso was outkilled, outblocked and outaced by Toray by 20 points. However the Airybees made fewer hitting errors (4) and fewer service errors (9), which kept them in the match. Denso with the win gave them a five point gap over Toray in the battle for third place. Tje win also clinched Denso a spot in the Final 6.

Toyota Auto Body Queenseis faced Ageo Medics in a battle of foreigner opposites. Cuban Kenia Carcaces for Ageo and Neriman Ozsoy for Toyota. The Queenseis took the first two sets, but Ageo won a tight third set to make the match 2-1 Toyota. The fourth set was a complete blow out by Ageo 25-9 to force a fifth set. Ageo had a 7-2 lead in the fifth set, but the Queenseis had a 7-0 run to come back with a 9-7 lead. Ageo eventually tied the set at 10. Ageo had a 14-13 lead after a block. A Carcaces spike off the antenna tied the match at 14. A Queenseis block on Carcaces made it 15-14 and another block on Carcaces gave the set to Toyota 16-14 and match 3-2. Carcaces had 39 points (38k, 1a) for Ageo. She did get help from Kyoko Aoyagi 12 points (8k, 2b, 2a) and Yuki Araki 11 points (8k, 3b) in the loss. Toyota’s Neriman had a lower point score with 26, but with 4 blocks she made up on the defensive end of the net. Erika Araki was her dominant blocking self with 6 blocks for Toyota. Momoka Oda with 14 (12k, 2b) and Saori Takahashi 20 (15k, 2b, 3a) kept Toyota in the match. Ageo will regret the loss after outscoring the Queenseis by six. Toyota moves into a tie on wins with Toray, but just one point behind the Arrows.

On Sunday, Hisamitsu dominated Denso 3-0 as the Airybees could not get around the blocks of Akinradweo (5 blocks) and Risa Shinnabe (4 blocks). Yuka Imamura for Hisamitsu had 16 points in the win to give the Springs a 19-0 record. Two matches left in the regular season to be perfect. Denso’s loss gave second place in the regular season to JT Marvelous as they are nine points behind with only two matches to play.

Ageo comfortably swept 3-0 Hitachi Rivale to end Hitachi’s playoff chances. Kenia Carcaces led all scorers with 24 points (22k, 2b). Ageo matches NEC on wins at six and points at 20, but NEC still has four matches to play. While Ageo only has two matches left. Right now they are on the outside looking in at the Final 6.