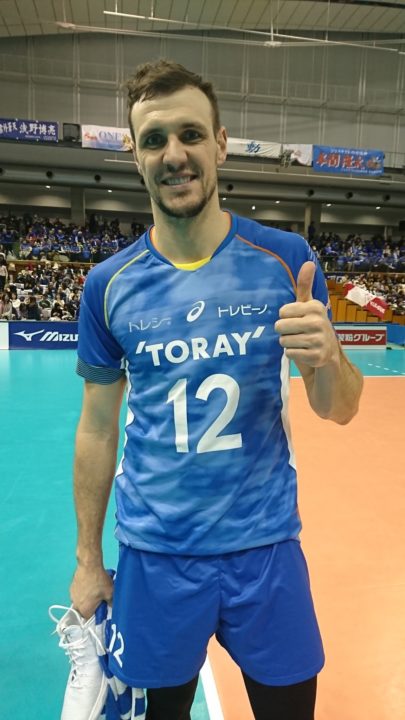 With two matches left in the regular season for the men’s V.League, Toyota Gosei Trefuerza were looking to clinch second... Current Photo via Japan V.League

With two matches left in the regular season for the men’s V.League, Toyota Gosei Trefuerza were looking to clinch second place in the regular season and four bonus points for the Final 6 playoffs against the JTEKT Stings. The Stings were in sixth place and looking to leap into fifth place with a win and a Suntory loss. Each set in this match was decided by two points, and the second and third sets both went to extra points. However, each of these three sets went to Toyota for a 3-0 sweep. With the win, Toyota will finish second in the regular season, while JTEKT is still in sixth place. Croatian Igor Omrcen for Toyota led all scorers with 22 points, all kills. Bulgarian Matey Kaziyski had 15 (13k, 2a) to lead the Stings in the loss.

With Toyota’s win, Toray Arrows were looking to maintain their third place as they faced the Panasonic Panthers. Panasonic who have already clinched the regular season title, only played two of their normal starters Tatsuya Fukuzawa and Akihiro Yamauchi in the match. With that said, it was not much of a match as the Arrows swept easily 3-0. Canadian Gavin Schmitt led all scorers with 20 points (16k, 2b, 2a) for Toray. Takahiro Imamura had 12 points (11k, 1b) for the Panthers to lead them in the loss. Toray keeps third place, but it could finish in fourth place on Sunday.

JT Thunders are still within striking distance of the Arrows as they met the Suntory Sunbirds. Suntory win a win would clinch at fifth place and could still catch the Thunders. A Thunders win would clinch at least fourth place with the possibility for third with some help on Sunday. The Thunders used their Australian opposite Thomas Edgar to win this match. Edgar was great with 40 points, 38 of which were kills (1b, 1a). Other than the tight second set win for Suntory, this was a comfortable win for the Thunders. Suntory’s Cuban Yadrian Escobar tried to keep pace with Edgar but with “only” 29 (26k, 3b). The Thunders were 14 points better in spiking (+7 kills and -7 errors), which was essentially to difference in the match. JT stay in fourth and have a chance to finish third with a win and a Toray loss.

Sakai Blazers met FC Tokyo in a battle of the bottom of the table. Neither team can move from their position before the end of the regular season. Sakai took advantage of their spiking (+9 kills) and blocking (+7 blocks) against FC Tokyo to sweep the match 3-0. Brazilian Wallace Martins of Sakai led all scorers with 17 points (14k, 2b, 1a) in the win.