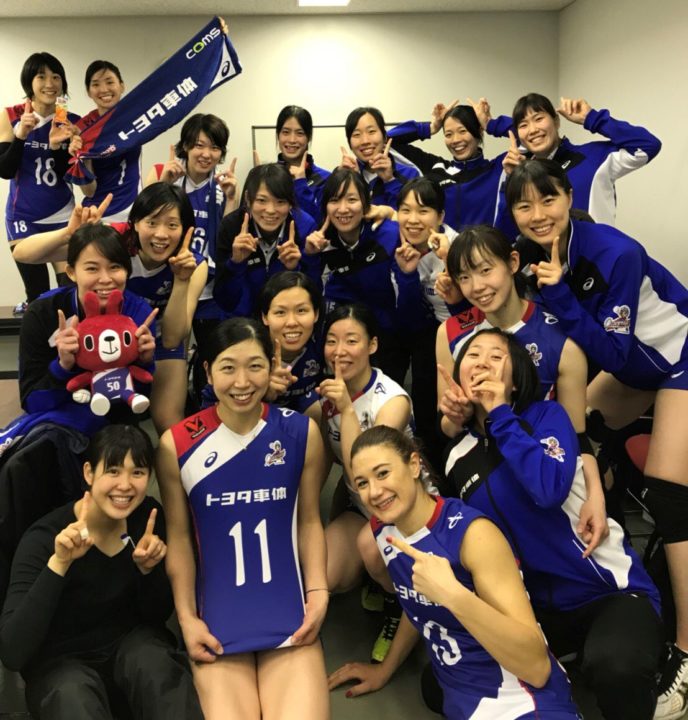 With only one or two games left in the regular season for the teams in the Japanese women’s V.League, Ageo... Current Photo via Toyota Auto Body Queenseis

With only one or two games left in the regular season for the teams in the Japanese women’s V.League, Ageo Medics faced a big mountain to climb against the undefeated Hisamitsu Springs. A win by Ageo would put them ahead of Toray and NEC, but Toray and NEC would still have a match to play on Sunday, while Ageo would be finished for the regular season. Hisamtisu got out to early leads in the first and second sets, that Ageo would fight back to within a point before the Springs kicked it into overdrive. In the third set, Ageo couldn’t get close and the Springs swept Ageo 3-0 to end their playoff hopes. Ageo was stopped by the block of Hisamitsu 9-1 in the match. Let alone the offensive balance by the Springs. Rika Nomoto led all scorers with 19 (15k, 3b, 1a). Teammates Yukii Ishii and American Foluke Akinradewo each contributed 15 (14k, 1b) and 13 (10k, 3b) in the win. Ageo forced the offense through Kenia Carcaces with 16 kills of her 17 points (1a) in the loss. Hisamitsu goes for the perfect regular season on Sunday against Toray.

After that, Denso Airybees and Toyota Auto Body Queenseis were locked in a battle for 3rd place and 3 bonus points in the Final 6 playoffs. The Queenseis played first against NEC. NEC had clinched their playoff spot when Ageo lost to Hisamitsu, which was at the same time as their match. Toyota eked out an extra point win in the first set 28-26. NEC came back in the second in a dominant performance 11-3 run to finish the set. Toyota jumped on the Red Rockets early to win the third. In the fourth set, Toyota got a small gap, and just kept slowly extending it to win the set and the match 3-1. Neriman Ozsoy led all scorers with 30 points (26k, 3b, 1a) for the Queenseis. Momoka Oda of Toyota also gave support with 15 (13k, 2a). NEC was fairly balanced in scoring with Mizuki Yanagita leading the Red Rockets with 18 (15k, 2b, 1a). NEC was 7 points worse at the service line (-2 aces and +5 errors), which was the scoring difference in the match. With the win the Queenseis reached 32 points and 11 wins. Denso could match that total, but would the sets ratio be in their favor?

The Airybees faced JT Marvelous. JT had nothing to play for other than pride as second place had been clinched already. However both the first and second sets were decided by the minimum two points, one for each team. Denso went on a 7-1 run to end the third set to take a 2-1 set lead. A big run at the beginning of the fourth set gave an 8-point lead to the Airybees and they coasted to the win 3-1. Brankica Mihajlovic of JT led all scorers with 26 points. This match was a blockfest by four players, each over four blocks in the match. JT’s Aika Akutagawa with 5, Denso’s Mizuho Ishida with 6, Christiane Furst and Rei Kudo each with 4. Nanaka Sakamoto led the Airybees with 23 (20k, 2b, 1a) in the win. With the win Denso, matched Toyota on points with 32 and wins with 11. However, with the 3-1 set win for both teams, the Queenseis win the sets ratio by .001 (1.025 to 1.024) and finish the regular season in third place. If Denso had swept 3-0, they would have finished in third place. Do not forget that if teams finish tied in the Final 6, the team finishing better in the regular season wins the tiebreaker.

Lastly, Hitachi Rivale met Toray Arrows. Hitachi was playing their final game of the year and were looking to end with a win. A Toray win would give them a gap over NEC for fifth place and one bonus point for the Final 6. Other than a tight loss in the second set, this was a comfortable 3-1 win for Rivale. Hisae Watanabe led all scorers with 22 points for Hitachi. American Kadie Rolfzen had 18 (5k, 3b) to lead the Arrows in the loss. Toray is still ahead of NEC for fifth place with one more win than the Red Rockets (8-7), with one match to play.