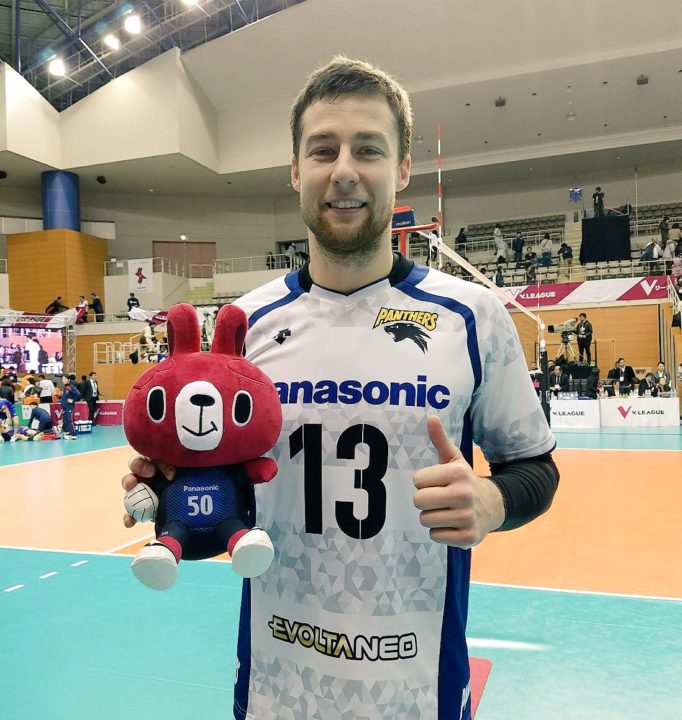 Sunday was a day for five set matches as the V.League had three of them. Toray Arrows faced Sakai Blazers... Current Photo via Panasonic Panthers

Sunday was a day for five set matches as the V.League had three of them. Toray Arrows faced Sakai Blazers as Sakai is battling to stay alive in the race for the Final 6. In a match that Sakai will be kicking themselves for if they do not make the playoffs, in their two set wins, they outscored the Arrows by 16 points, but lost the match 3-2. Even at the end of the match Sakai outscored the Blazers by 7 points. Canadian Gavin Schmitt may have been injured early in the match as he played only one set. Even more reason for Sakai to have won the match. Brazilian Wallace Martins for Sakai led all scorers with 25 points (20k, 1b, 4a). His teammates Yoshihito Matsumoto and Shunsuke Chijiki each had four blocks in the loss. Kentaro Takahashi, one of the Japanese national team’s NEXT 4, came off the bench for Toray with 16 points (14k, 1b, 1a) to lead them in the win. Rookie Takahiro Tozaki added 15 for Toray. With the win Toray clinched a berth in the Final 6. Sakai is still one win behind JTEKT Stings in the battle for the final spot in the Final 6..

Toyota Gosei Trefuerza met the Suntory Sunbirds. Trefuerza were hoping to keep second place to themselves, while Suntory were also trying to expand their gap to Sakai. Trefuerza to the fifth set 15-11 to win the match 3-2. The win by Toyota clinched a berth in the Final 6. Suntory did gain a point to but are still only one win ahead of Sakai. However Suntory is five points ahead, which is the second tiebreaker in positioning. Both teams used their foreign hired guns, Igor Omrcen for Toyota and Yadrian Escobar for Suntory to score on the offensive end. Omrcen had 31 kills and 3 aces for 34 points, while Escobar had 27 kills, 1 block and 3 aces for 31 points. Takuya Takamatsu also contriubted 21 points (18k, 2b, 1a) in the Trefuerza win.

Panasonic Panthers just steamrolled FC Tokyo in straight sets. The three musketeers of Kunihiro Shimizu, Michal Kubiak and Tatsuya Fukuzawa were the stars for Panasonic. Kubiak with five aces, Fukuzawa with five blocks and Shimizu with 16 (13k, 2b, 1a) showed why they are the league leaders. Milan Pepic (9k, 1b, 1a) and Dai Tezuka (7k, 3b, 1a) for FC Tokyo were their top leading scorers with 11. FC Tokyo will be eliminated from the playoffs with a loss or a JT Stings five-set match. Panasonic with a win will clinch the best record in the regular season and five bonus points for the Final 6.

JT Thunders were looking to solidify their fourth place against JTEKT Stings. The Stings are still slightly ahead of Sakai for the final position in the Final 6 playoffs. Through four sets, the teams were split 2-2 and tied on points. The Thunders got out to an early lead and held it to win the fifth set 15-11 and the match 3-2. Australian Thomas Edgar gave a great all around performance with 38 points (31k, 3b, 4a) in the win. His teammates Akihiro Fukatsu and Taishi Onodera each had four and five blocks respectively. Onodera who is still in college was playing in his first professional match. Yuji Nishida for JTEKT did him one better, he is still in high school, but playing in his second game. Nishida led JTEKT in scoring with 26 (22k, 2b, 2a), which is surprising given that Matey Kaziyski still had 24 (20k, 3b, 1a) in the loss. The Thunders now have a three win cushion over Suntory in fifth place. JTEKT gained a point but a win by Sakai next week could have them looking on the outside of the Final 6.