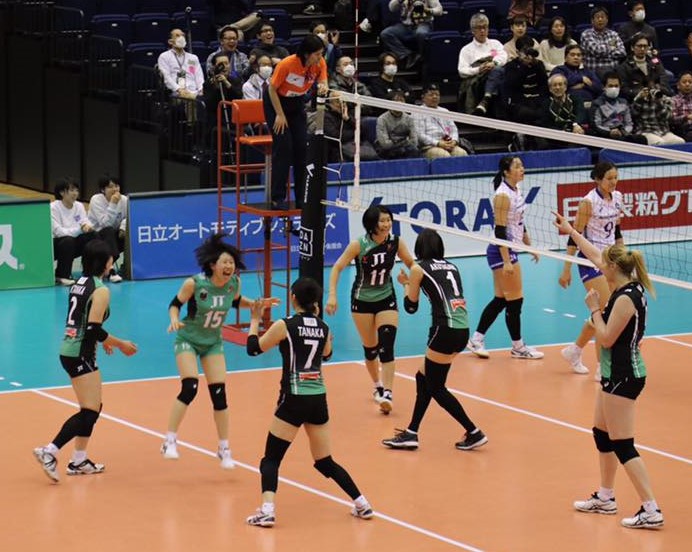 The Hisamitsu Springs are just dominating the V.League this season, and they faced the NEC Red Rockets, last year’s champions... Current Photo via JT Marvelous

The Hisamitsu Springs are just dominating the V.League this season, and they faced the NEC Red Rockets, last year’s champions on Sunday. Other than a tight second set, which Hisamitsu won in extra points, it was not a contest as the Springs swept NEC in three sets. The Springs have had a great offensive balance all season and Sunday was no different with five players between 8-13 kills, and NEC could not match their level being 15 kills behind the Springs. Rika Nomoto led all scorers with 15 (13k, 1b, 1a) for the Springs, while Sarina Koga (11k, 1b, 1a) and Shiori Aratani (12k, 1a) both with 13 for NEC in the loss. A Hisamitsu win or a JT Marvelous loses clinched the best record in the regular season and five bonus points for the Final 6.

Denso Airybees were looking to continue their three match win streak against Hitachi Rivale. Rivale had lost four in-a-row and were trying to keep their Final 6 hopes alive. Christiane Furst had a great day blocking with 6 blocks and her presence at the net forced Rivale into 7 more hitting errors. The Airybees also had a 6 block advantage in blocks over Hitachi. That combination led to a comfortable 3-0 sweep for Denso and kept them firmly in third place. Yurie Nabeya led all scorers with 16 (14k, 1b, 1a) for Denso. Miwako Osanai was the only player for Hitachi to reach double figures with 13 (12k, 1a) in the loss. Hitachi must win out to have a chance to make the Final 6. Denso clinches a spot in the Final 6 with a win.

JT Marvelous are kind of stuck in second place. They probably will not catch Hisamitsu and Denso is too far back to catch them. Not saying complacency has set in, but their match with Ageo Medics was not as comfortable as it should have been. Ageo is still battling to get into the Final 6 and needed a win. Ageo’s plan was give the ball to Cuban Kenia Carcaces and pray JT can’t stop her. Carcaces had 37 kills, 3 blocks and an ace for 41 points. She did have two teammates, Yuki Araki (11k) and Yuko Maruyama (8k, 3b) contribute 11 each. Serbian Brankica Mihajlovic tried to keep pace with 30 kills and 33 (2b, 1a) points for the Marvelous. She did get better blocking and service help from her teammates to take the match in five sets 3-2. JT can clinch second place and four bonus points in the Final 6 with a win or a Denso loss. The Marvelous have an outside chance to catch Hisamitsu, but JT would need to win all of their matches in 3 or 4 sets and have Hisamitsu lose all four matches. I doubt that it will happen even though they do face each other one more time next weekend.

Lastly Toyota Auto Body Queenseis faced the Toray Arrows. Toyota needed a win to give them a bigger gap for a Final 6 berth. After Ageo’s loss, a win would give them a two win cushion of Ageo. Toray was trying to keep pace with Denso for third place. Toyota and Toray needed a fifth set in a and match where each team dominated sets. Toyota the first and third by 10 points each, while Toray had the second by five and the fourth by seven. Toyota got out to an early lead in the fifth set and did not relinquish it for the 3-2 win. Neriman Ozsoy has carried the offensive load for Toyota with 31 points (29k, 2a). Erika Araki and Saori Takahashi each had 4 blocks to give the Queenseis an 11-6 advantage in blocks. Kadie Rolfzen was the offensive force for Toray with 23 kills out of her 26 points (2b, 1a) in the loss. Kanami Tashiro had four aces for Toray, but her teammates had eight more service errors to negate her serving. With the win the Queenseis move into fifth place, while Toray maintained fourth place.