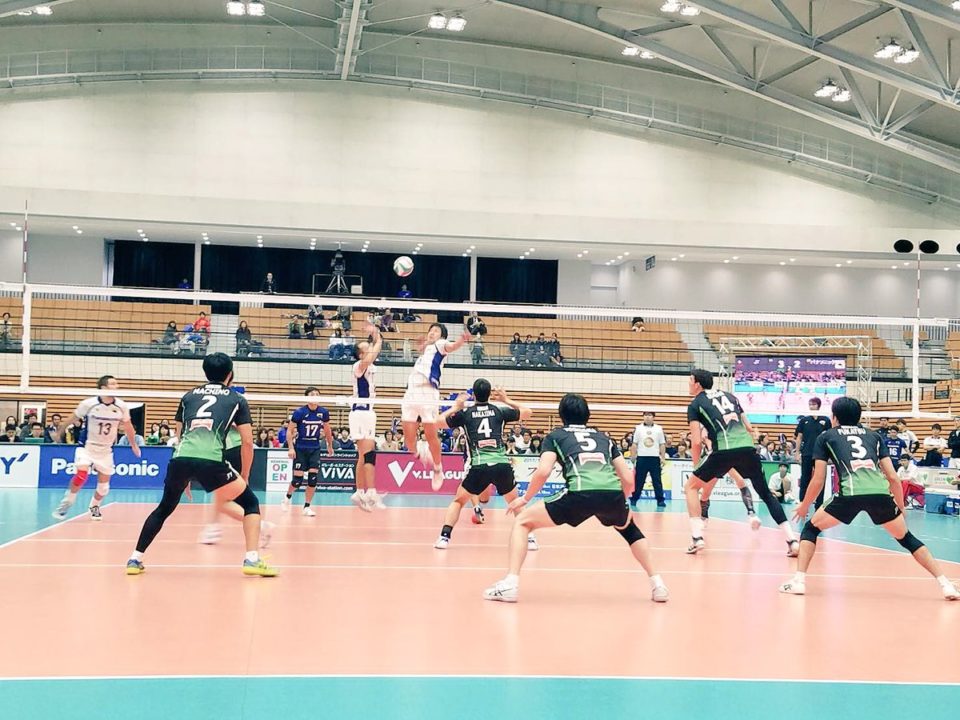 For Matchday 4, two matches were played in Fukui City, Fukui prefecture and the other two in Nara City, Nara... Current Photo via Panasonic Panthers

For Matchday 4, two matches were played in Fukui City, Fukui prefecture and the other two in Nara City, Nara prefecture, home to the JTEKT Stings.

In the first match in Nara, Suntory Sunbirds took on FC Tokyo. FC Tokyo was looking for their first win, while Suntory were looking to get their second win of the season. FC Tokyo took the first set 25-20, but Suntory returned the favor in the second set with the same score. In the third set, Suntory just dominated winning 25-15 and then took the fourth set comfortably to win 3-1. Suntory’s Cuban Yadrian Escobar led all scorers with 26 points (19k, 2b), including 5 aces! While Bosnian Milan Pepic had 21 points (20k, 1b) for FC Tokyo. Escobar’s aces help Suntory win the service line with 7 aces to 0 for FC Tokyo.

In the second match in Nara, the host Stings battled Toray Arrows. The Arrows won a close match throughout 3-0. Canadian Gavin Schmitt had 17 points (15k, 2b) for the Arrows leading all scorers. Toray’s Yamato Fushimi (8k, 2b), Hidetomo Hoshino (8k, 1b, 1a) and Yuji Suzuki (12k) all reached double figures. JTEKT did not have a single player with double figures in this close match. Ryosuke Hakamaya as a substitute led JTEKT with 9 points, all kills. Bulgaria Matey Kaziyski had 8 for JTEKT.

Moving to Fukui, leading Panasonic Panthers met the JT Thunders. Panasonic blew out the Thunders 25-11 in the first set. JT responded harshly forcing the Panthers to go to extra points to win the second set 26-24. Panasonic smoothly finished the match to sweep 3-0 and maintaining their perfect record in the league. Kunihiro Shimizu with 16 points (14k, 1b, 1a) and Tatsuya Fukuzawa with 13 paced the Panthers. Poland’s Michal Kubiak was steady with 11 (8k, 2b, 1a) for Panasonic. Australian Thomas Edgar was the leading scorer for JT with 19 points (17k, 2b), but was not as efficient spiking as he normally is. He had 47 swings for 17 kills and 3 errors, for a hitting percentage of .297, well below expectations. He also did not get much help from his teammates as the next highest Thunders player had 8 kills.

In the final match in Fukui, Toyota Gosei Trefuerza met Sakai Blazers. Toyota was trying to keep pace with Panasonic, while Sakai were looking for their first win. The first two sets went to extra points with Trefuerza winning both of them. Sakai could not find a way back into the match in the third set, with Toyota sweeping 3-0. Croatian Igor Omrcen for Trefuerza led all scorers with 25 points (22k, 1b, 2a). While Brazilian Wallace Martins had 23 (21k, 1b, 1a) for the Blazers. Toyota now faces Panasonic on Sunday for first place.